Campbell, a former Lions tight end (2006-08), was introduced as the Lions head coach on Thursday after signing a six-year deal.

“I wanted this job – bad – because I felt like I knew this community. … All right, here’s what I do know, is that this team is going to take on the identity of this city. This city has been down, and it found a way to get up. It’s found a way to overcome adversity.

“That’s going to be the mentality, darn it. We’re going to learn that any loss that we take, we’re going to make sure that we feel the full pain of it and not grow numb to it and learn from it and not to want to taste it again. We’re going to be competitive in every game. I can’t sit up here and guarantee wins and losses. I just can’t do it,’’ Campbell, 44, said.

The former tight end just seems so unlike the others. Get this, the nameplate on his office door reads: Head coach/The Dude.

His only experience as a head coach was an interim role for the Dolphins for a dozen games. It was brief and it was tough, but he learned from it and showed enough promise that Saints coach Sean Payton took him on and promised to help him develop as a coach.

He had no history with new GM Brad Holmes. But both did their homework, connected with mutual friends and it looks like they are a good fit. Holmes interviewed Campbell before the final decision was made.

“There’s no secret, you have to get good people around you, who are all pulling in the same direction. It’s team. It’s all about team. There’s no ego. Brad and I are going to have – we both have say on the 53-man roster. We have to agree. So, we’re going to go into a room, and we’re just going to fight until one of us comes up. We’ll see what happens – no,’’ Campbell said.

He was kidding. (It’s hard to tell with his deadpan delivery, but he was.)

“We are going to collaborate. We are going to come up with the best answer, the best solution. What can we do with this guy – is it for the future, is it for now? That’s not even a problem – I want it that way. I want people to challenge me on an idea. I don’t want to have a bunch of people that agree with everything that I say – that’s a recipe for disaster. I don’t want a bunch of people who drink a gallon of coffee like I do in a day. You find the right mix and the right balance of people. I know this, when it starts at the top and it’s right, then it’ll go down, it’ll trickle down to where it’s supposed to. Those guys are going to have pride in where there are, who they play for, how they’re going to play. You’d say more times than not, that leads to success, and there’s only one way to do it, and it’s to do it the right way. That’s the other thing that intrigued me about Sheila, she wants to win bad, but she’s not going to sell her soul to the devil to do it, neither am I.’’

He wouldn’t comment on Matthew Stafford’s future but called him “a stud.”

Team owner Shelia Ford Hamp was a vital part of the decision process. The team — Hamp, Rod Wood, Chris Spielman and Mike Disner — set goals and worked the process. Along the way, they interviewed two Saints for the GM job. They asked each who they would want as head coach. Both said Dan Campbell who most recently served as the assistant head coach and tight ends coach for the Saints.

“All I can say is I’m confident we have two terrific men. They’re both incredibly smart, articulate in what they’re looking for and our team. They’re both winners. I think they speak the same language, and I think it’s going to be an awesome relationship. It already is, and they hadn’t really known each other,’’ Hamp said. “I think this is going to be just great. Really great.”

Until then, watch your knee caps.

Owner Sheila Ford Hamp couldn’t hide her excitement about new Lions general manager Brad Holmes as she was introducing him on Tuesday during a virtual press conference.

Team president Rod Wood explained how he trusts his first impressions. Within two or three minutes of the first interview with Holmes (which was virtual), Wood wrote a note to himself, “This is the guy.”

In fact, he noted the last time he was at the Lions practice facility was when he was interviewing for a PR intern position. That was around 2003.

Instead he took the same job with the St. Louis Rams and worked his way up through the scouting ranks. He spent 18 seasons with the Rams, most recently as director of college scouting. He brings his knowledge of the 2021 draft class to Detroit.

Hamp was right, Holmes seems to have the right attitude to get the Lions back to the playoffs and not just get there, but also win.

“Everything is about the team, bottom line,’’ he said. His delivery guaranteed those are not empty words.

He was quite clear about the intangible he wants to see in every player. That would be passion. Holmes said there is no margin for error. Passion is of utmost importance when it comes to intangibles.

“We will build a winning and inspired culture… There will be no ego in this process,’’ Holmes said.

He’s not looking at a five-year plan. He’s looking to put a winning team on the field in the fall.

It’s hard not to like this guy just from watching this one virtual press conference.

Now he has to put some muscle behind his words and make the best decisions. He will be involved in the next big hire – the head coach.

Hamp, Wood, Chris Spielman (special assistant to Hamp) and Mike Disner (vice president of football operations) were in on all of the interviews. They talked to a dozen GM candidates.

When they debriefed after the initial Holmes interview, it wasn’t just Rod Wood who knew he was The Guy. It was unanimous.

It could be the dawn of a new era for the Lions franchise which hasn’t won a playoff game since Jan. 5, 1992.

Or it could be just another Lions’ GM hire.

I’d bet on the former. 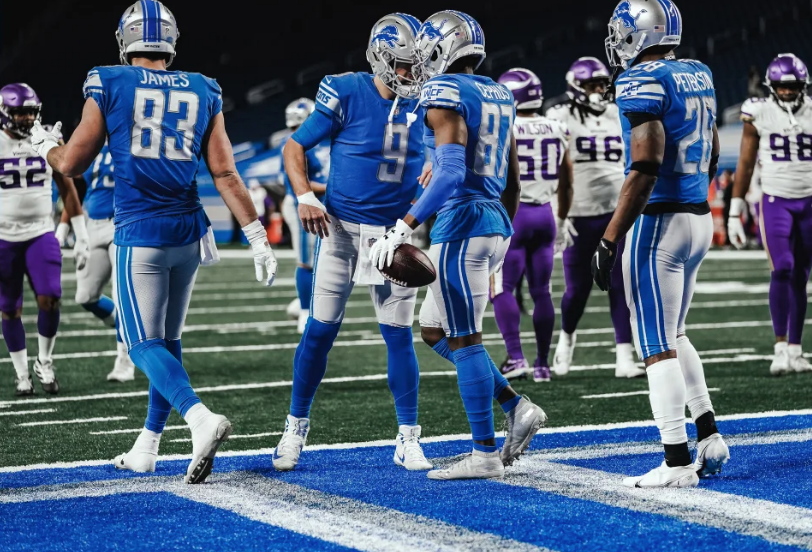 DETROIT — In one of the strangest seasons in NFL history thanks in part to the COVID pandemic, it’s finally over for the Detroit Lions.

They put an exclamation mark on a frustrating season with a 37-35 loss to the Minnesota Vikings on Sunday at Ford Field. The Lions finished 5-11 with just one home win.

The defense, which has struggled all season, set franchise records for the most points and yards given up in a season. They were worse than the winless 2008 team. Think about it.

Interim coach Darrell Bevell took over for the final five games (one he spent at home due to COVID protocol) and while the team seemed more energized the wins did not come.

“I’ve told these guys how much I love this game, how much I respect it. I think it says a lot in situations you guys might say is meaningless but there’s a lot of history in this game, there’s a lot of people who have been on the field before us,’’ Bevell said. “To go out and to play continually for one another as hard as they did the whole game long I think it speaks a lot for these guys.’’

Five of the keys in the game.

1. Quarterback Kirk Cousins played like Aaron Rodgers thanks to the Detroit defense. He threw for 405 yards and three touchdowns. And the Vikings were missing running back Dalvin Cook.Still they were able to run up the yards against Detroit’s porous defense.

2. The loss was by two points so every play mattered. Early in the fourth on fourth-and-goal on Detroit’s 1-yard-line, Tracy Walker broke through and sacked Cousins. Well, that’s what it looked like. However referee Adrian Hill blew the whistle and called it roughing the passer. That gave the Vikings a new set of downs and they scored on a Cousins keeper two plays later. After the game, Hill told the pool reporter (which is me): “By rule, one of the categories for roughing the passer is full body weight, where the tackler lands with his full body weight on the quarterback. That’s the category this play fell into. The momentum doesn’t play a role and the rolling off afterwards does not play a role. It’s that initial contact to the ground. If you roll off afterwards, that doesn’t eliminate the foul.” … Bevell said he was told on the sidelines that it was because of body weight, but the coach said he’d like to get another look at the replay.

3. Matthew Stafford had a solid game but his one interception was costly. He finished 20 of 31 for 293 yards and three touchdowns. He was playing with a bad pack, ribs and injured thumb. Yet, he was out there and there wasn’t really much doubt that he’d be on the field despite limited practices. “It’s a cool relationship to have with the quarterback,’’ Bevell said. “I really appreciate what he did. The guy’s out there, not 100 percent, he’s fighting for his teammates. He talked to the team last night about respect for the game, the history, the guys who came before us. The guy is laying everything on the line in a game that he doesn’t need to. I think that says a lot about him as a person, as a quarterback, what he means to the team.’’

4. With two touchdown catches Marvin Jones Jr., became the third leading wide receiver in all of franchise history. He finished with 36 touchdowns in Detroit (he has 50 overall in the NFL) which places him behind Calvin Johhson (83) and Herman Moore (62). He had eight catches for 180 yards and another touchdown that was reversed on a challenge. “Marv was hot early and I was going to keep feeding him. Obviously I wish that third touchdown I thought it was a great catch, i’m not sure it hit the ground,’’ Stafford said. “Maybe there’s a better view. We didn’t have a good one in the stadium. I’m really happy for him. He’s been a really good player for us for 5 years and I’ve enjoyed playing with him. The guy’s an incredible talent obviously, a great, great friend of mine and a great teammate. I’m just happy he had a big day.’’ Jones will be a free agent heading into next season so it’s unclear if he will return.

5. Bevell was handed a tough task after Patricia was fired. He handled it with grace and passion. His love for the game is obvious. “I was extremely proud of the way he stepped into that situation, it’s a tough one. It’s a tough year to be a coach in the NFL with all the extra COVID stuff going on, all the regulations, I thought he did an outstanding job. He’s a hack of a person and everybody got to realize that,’’ Stafford said. … “He’s a great person, a great coach, I was just really happy he got the opportunity and I think everybody in our locker room really rallied around him which was awesome. I want to win more football games than we did but I thought he stepped in and did a great job.’’