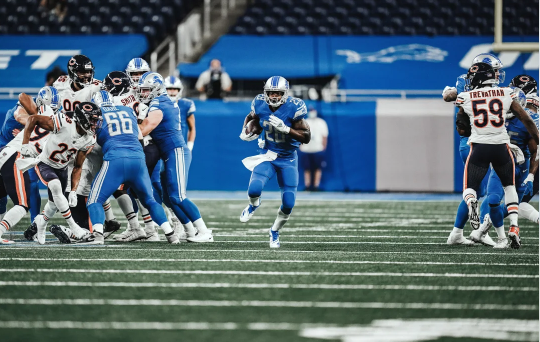 DETROIT — The season isn’t over for the Lions after they imploded in a 27-23 loss to the Chicago Bears in their opener.

However, at 0-1 the immediate future looks at least partly cloudy. Next Sunday they’re at Green Bay, followed by a game at Arizona and then back home on Oct. 4 to host the New Orleans Saints.

The fourth-quarter collapse was brutal. The Lions were ahead 23-6 when the quarter started and hanging their heads when it was over.

So the emphasis for this season was on finishing. It just didn’t happen in the opener. The debacle wasn’t shocking, we’d seen it before.

Five thoughts about the loss:

1. Adrian Peterson made his Lions’ debut with 14 carries for 93 yards (6.6 yards per carry) along with three catches for 21 yards. Good call on signing the 35-year-old free agent. “I thought he gave great effort, I thought he gave great energy. I think the guys, really, they like to be out there with him and they know he’s going to work hard and he’s going to go hard every single play. So that was good to see,’’ coach Matt Patricia said. “I really thought he made some tough runs. I thought he brought a physical style to the run game and that was encouraging.”

2. Matthew Stafford was 24 of 42 for 297 yards, 1 touchdown and one interception. A clear indication that the Bears defense was working came in the Lions final possession when the quarterback scrambled for one yard on first-and-10 to kick off the drive, then two plays later ran for 7 yards, again on a first down. He did complete a 32-yard pass to Danny Amendola on that drive. And he put the winning touchdown in D’Andre Swift’s hands in the end zone but he dropped it. This loss wasn’t all on Stafford but he was a part of it.  “We just have to execute better. When you look at it that’s the name of the game in the fourth quarter. We didn’t do it enough last year and we didn’t do it obviously enough today,’’ Stafford said.

3. Linebacker Jamie Collins was ejected early in the second quarter. He was apparently trying to show referee Alex Kemp that one of the Bears was leading with his helmet. But he misplayed it and butted his head into Kemp who told the pool reporter he threw him out for the contact. The intent had nothing to do with the decision. When he was thrown out Collins already had 3 tackles and a pass defense. It was a bonehead play on his part and it was costly for the team.

4. Both teams were a little slow out of the gate which was to be expected since there were no preseason contests. The Lions held a 13-6 lead at the half after a touchdown dash by rookie running back D’Andre Swift with 19 seconds left.

5. Tight end T.J. Hockenson, who had a standout training camp, continued it with five catches for 56 yards and a touchdown.

By the numbers: Matt Patricia is 9-23-1 as head coach with the Lions.. … Safety Tracy Walker led the defense with seven tackles. … Trey Flowers had the Lions’ only sack of Mitchell Trubisky. … Cornerbacks Justin Coleman and Desmond Trufant both left the game with hamstring injuries and did not return. … The Lions had 98 rushing yards in the second half after only 40 in the first half. … Danny Amendola led the wide receivers with five catches for 81 yards. … Rookie wide receiver Quintez Cephus had the most targets (10), but he caught just three of them for 43 yards.

While coach Matt Patricia wouldn’t say, don’t be surprised to see newest the Lions running back Adrian Peterson on the field on Sunday in the home opener against the Chicago Bears.

“We’ll see, it’s Monday, he just got here, so we’ll see how everything goes,’’ Patricia said on a Zoom conference call on Labor Day.

The Lions announced the signed Peterson, a 35-year-old free agent, on Monday. He had been released by the Washington Redskins on Friday.

“Glad to see him in our uniform — saw him too many years in purple and gold and he was doing his thing against us,’’ quarterback Matthew Stafford said on a Zoom call. “Nice to have him. Obviously a really talented player, one of the greats at the position. I think he raises the bar for a lot of people just to go out there and watch the way this guy works at the age he is and what he’s accomplished.’’

Certainly Peterson’s familiarity with Darrell Bevell, the Vikings offensive coordinator at the time who is now with the Lions, played a factor. The two worked together from 2007-10.

“It was a great part, kind of a perfect storm to get him here. Being so familiar with Bev’s offense and obviously being very productive in that offense,’’ Patricia said.

As a rookie, Peterson set an NFL game record when he rushed for 296 yards against the Chargers.

“So that’s always a good draw when you have that kind of production in an offensive scheme,’’ Patricia said.

“Being familiar with the type of offense we run, for him to be able to come in without a training camp, step right in and hopefully try to contribute I think it’s a big factor, it gave us a little bit of an advantage,’’ the coach added.

That was a few years back, but Peterson’s production the past two seasons was 898 rushing yards (2019) and 1,042 in 2018. He averaged 4.3 and 4.2 yards per carry. In his 13-year career he’s averaged 4.7 yards per carry — an absolute gaudy number compared to what any Lions’ running back has accomplished since Hall of Famer Barry Sanders averaged 5.0 yards per carry.

Peterson’s experience in the running backs room should also prove valuable. Kerryon Johnson enters his third season and only played in 18 games total, eight of them in 2019. D’Andre Swift, a second-round pick, is a rookie. (Bo Scarborough was placed on injured reserve.)

“I think it’s always great to see young players see vets who have been in the league a long time, see how they approach game week, how they approach preparation, how they practice and how they perform,’’ Patricia said. “That’s a big part of younger players developing and becoming professional at this level right out of college.’’

While Swift and Johnson have had some injuries during training camp, Patricia said that is not why the decision to sign Peterson was made.

“With Adrian Peterson it was kind of Independent of everything else going on,’’ Patricia said.

While Lions fans are quite familiar with Peterson, here are the career stats that he has run up — 3,036 rushing attempts for 14,216 yards (4.7 avg.) and 111 touchdowns, ranking eighth in NFL history in attempts, fifth in yards and fourth in rushing touchdowns. The 2012 NFL MVP, Peterson has been named AP All-Pro seven times, has been selected to seven Pro Bowls, was a member of the NFL’s 2010s All-Decade Team and rushed for an NFL single-game record 296 yards on Nov. 4, 2007.

In two days, Detroit Lions running back D’Andre Swift has found a certain level of comfort on the practice field which isn’t easy for a rookie.

Certainly the second-round draft pick has plenty to work on and improve.

“Just getting everything down as far as the playbook, different terminology, quarterbacks speak faster, signals come quicker, just taking my studying habits and taking my knowledge of the game to the next level to make sure the coaches trust me,’’ Swift said on Tuesday in a Zoom call.

Coach Matt Patricia doesn’t like to talk starters or where a rookie might fit on a depth chart. It’s too early for that.

Still when Patricia was asked on Tuesday if Swift has a chance to start, he nodded in the affirmative. So far he likes what he sees from the back who played college ball at Georgia, Matthew Stafford’s alma mater.

“For me, for Swift obviously I think he’s got a great skill set of what we saw in college. We’re exploring the different things he can do certainly at our level and to do it consistently is a big thing for us right now,’’ Patricia said on a Zoom call late Tuesday afternoon.

To translate: Swift has turned a few heads as a pass catcher early in camp.

“I think some of the different reads in the run game right now we’re trying to get improved for him and his eye control and some of those scenarios,’’ Patricia said. “We do know that he’s a smart guy and he can handle a lot, not only in the run game but the pass protection and being able to get the blitz pickups and some of the technique there. Some of the linebackers at this level are maybe bigger than they were in college and some of those guys going through there, so the technique is really important for us to make sure we have that pocket protected.’’

Patricia said he wants to build on things Swift can do in the passing game.

“Not that it’s small steps, but we try to make sure we build it in the proper manner. So far he’s done an outstanding job of handling all that,” Patricia said. “And then certainly as we get towards more and more live contact in the running back position and being able to have really good contact balance, things like we saw in college, being able to break some of those tackles. The more of those scenarios that we can get into and see and have that confidence in certainly that will help him along the way.’’

Swift said when he played 7-on-7 football as a kid, he discovered his ability to catch the ball.

The Bulldogs didn’t exploit that part of his game. In three seasons he had just 20 catches, but five of them were for touchdowns.

“It’s something I want to definitely perfect at this level of football just being used in different amounts of ways,’’ Swift said.