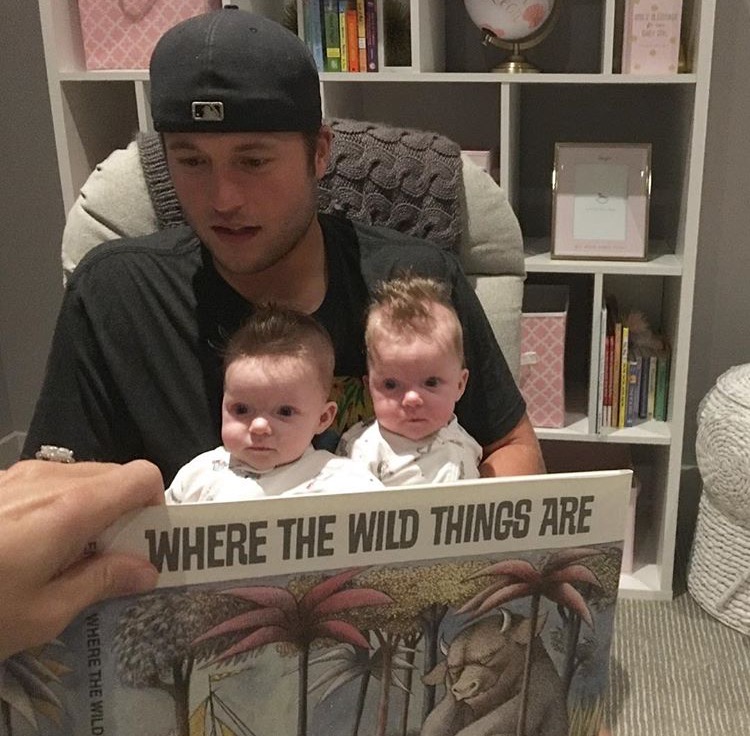 Lions quarterback Matthew Stafford has agreed to a five-year extension that is expected to make him the highest paid player in NFL history. The Lions made the announcement on Monday night that he is signed through the 2022 season.

Multiple reports have the deal valued at $27 million per year or $135 million for five years. It includes a $50 million signing bonus and $92 million guaranteed, both NFL highs, per ESPN’s Adam Schefter.

(Photo of Stafford reading to his twin daughters was posted on his wife Kelly’s Instagram account on Monday.)

Stafford, 29, had one year remaining on his contract. The two sides have been talking for months to get a deal done.

The quarterback, entering his ninth season, has not had much to say about the negotiations, leaving everything up to his agent and the team.

He has led the Lions to the playoffs in two of the last three seasons, but has yet to win a postseason game.

The quarterback has led 28 game-winning drives in his career when trailing or tied in the fourth quarter or overtime. He had eight of those drives in the 2016 season.

Lions wide receiver Golden Tate posted congratulations on his Instagram account: “Congrats my friend, you deserve every blessing that’s coming your way! No one deserves this more than you. The attitude and dedication you bring every day is contagious …”

Dan Orlovsky, who was Stafford’s backup for three years, posted on Twitter: “I was there for all these, and I still LOVE watching this dude ball. I watched this dude work, and prepare, and grind, and play through. For him it represents so much more than a $ amount. It’s a professional pride he has that’s unmatched. Congrats 9”

Stafford was the first overall pick in the 2009 draft. He surpassed 30,000 passing yards in the fewest games (109) ever by a quarterback in NFL history. He broke the previous record of 114 games set by Dan Marino and Kurt Warner.

With 30,303 passing yards, he joined Peyton Manning, Matt Ryan and Dan Marino as the only quarterbacks in NFL history to hit the 30,000-yard mark in their first eight seasons.