Lions’ defense came up big against the run 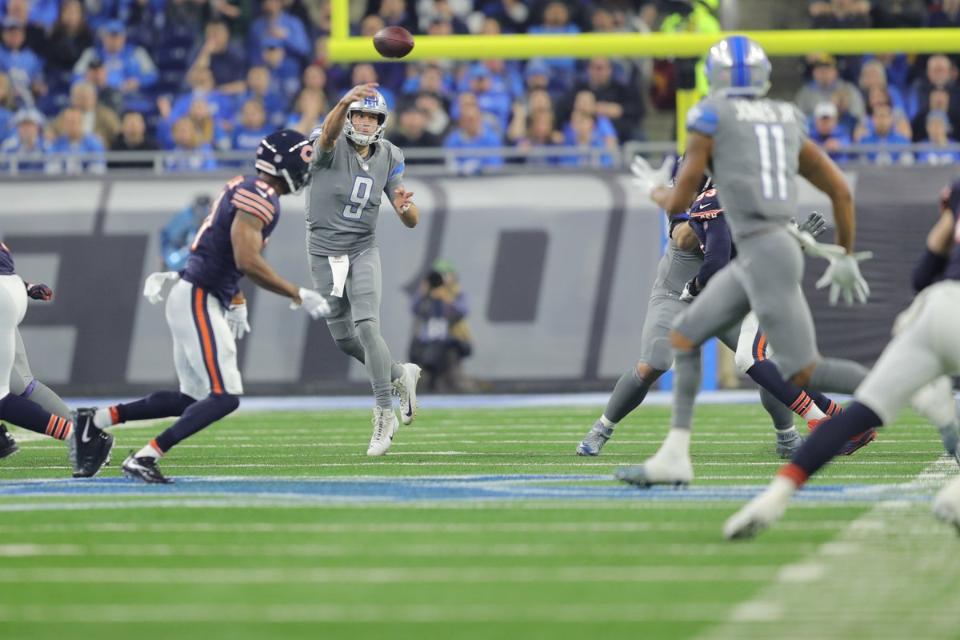 That is one big reason the Lions were able to defeat the Chicago Bears, 20-10 at Ford Field.

The Lions are now 8-6 with playoff hopes still alive. Slim hope, but hope just the same.

Detroit beat the Bears 27-24 on Nov. 19 at Soldier Field. While Chicago has won just four games (4-10) they had topped the Steelers, Panthers and Ravens — teams that had beaten the Lions.

1. Again, stopping Howard and the run game. In their previous meeting the Bears ran for 222 yards 125 by Howard. He had 10 carries for 37 yards on Saturday. Slight difference. “I just think we did what we were supposed to do, nothing more than that,’’ coach Jim Caldwell said. The defense saw it as a challenge and they met it this time.

2. The defense played possibly their most complete game this season. Slay intercepted Mitchell Trubisky twice and safety Quandre Diggs had one interception (his second in two games). “Watching film, I saw it, I jumped it. Either it was going to be incomplete pass or complete pass to me. I just made a play on it. If he would have tried to jump and catch it I would have smacked him right out of bounds,’’ said Slay describing his first interception.

The Lions’ defense held the Bears to 43 net rushing yards.

3. It wasn’t Matthew Stafford’s best game ever, but he was as good as he’s been this season. His 58-yard pass to Marvin Jones on third-and-18 in the first half was a thing of beauty. Jones went up to make the catch, but not many quarterbacks could deliver a ball like that.

“The one to Marv was an exceptional play, third and extra long they pick it right there and the guy falls down that’s a real good net punt, I think,’’ Stafford said. “So (I’m) willing to take those chances. I feel we needed a spark at that time in the game. It was a big one that helped us get in the end zone.’’

Stafford and Jones (three catches, 85 yards) have developed quite the connection.

“He’s really good body control guy, he’s made some big plays. I’m not afraid to give him chances,’’ Stafford said. “I think the further you get down the field the more uncomfortable the guys on defense get and the more advantage you have as an offense.’’

4. The Lions running game was effective. (I haven’t typed that sentence in a while.) Theo Riddick led the way with eight carries for 49 yards before he left the game with a wrist injury. Tion Green had 10 for 35 yards. Ameer Abdullah returned after missing two games with a neck injury. He wasn’t used often but had one carry for 8 yards and also three catches for 13 yards. Cue the speculation on who is the No. 1 running back. Caldwell said it will change each game depending on the opponent.

“We ran the ball relatively well, 91 yards, but you know that’s kind of where we want to be. You want to out-rush your opponent and you want to be somewhere in that 100-yard area. We didn’t quite get over the threshold, but I thought upfront with our line the guys hung in there, guys going in and out, they found a way to pass protect well enough and find some seams to run the ball so that was key,’’ Caldwell said.

5.  Jim Bob Cooter, the offensive coordinator, gets his share of the blame often but he called a solid game. The Lions did not run on each and every first down. He let Stafford loose a few times. The Bears defense was ranked 11th overall, allowing 325.5 yards per game so it’s not like the offense didn’t have to work hard. The Lions were six of 12 on third downs and looked to have a rhythm which is something we haven’t always seen this season. You can’t define it with stats, but you know it when you see it.