Stafford has been sacked 43 times in 14 games 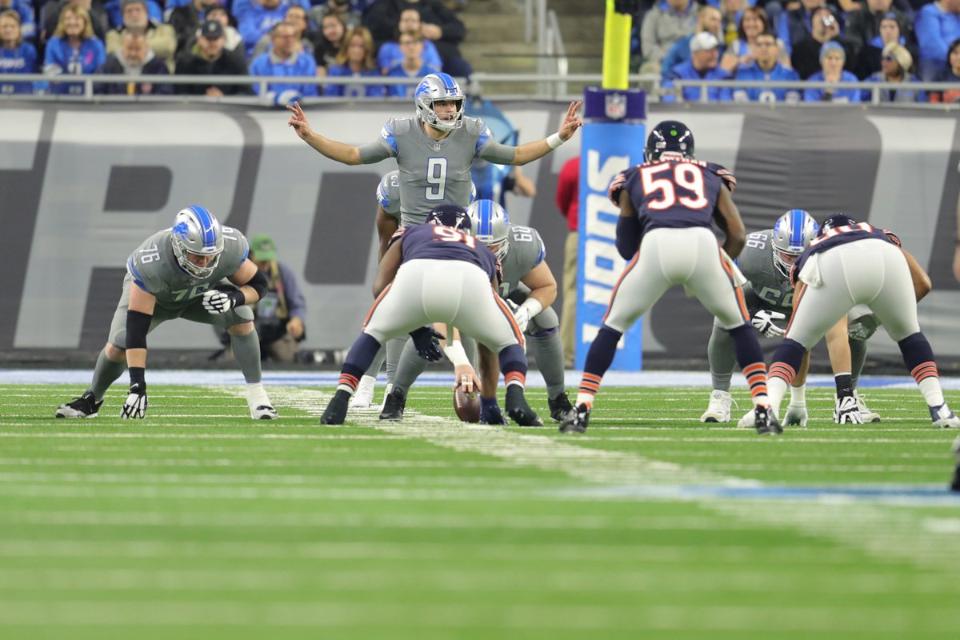 ALLEN PARK — If  Matthew Stafford is sacked twice in the final two games, it will tie his career record for being taken down.

Not exactly what GM Bob Quinn was thinking when he made the offensive line a priority last spring by signing veterans Rick Wagner and T.J. Lang.

Injuries happen and certainly the Lions’ offensive line has had more than its share in the first 15 weeks.

It’s difficult to keep track of who is where to start each game and then, typically, it’s not the same group that is on the field when the game wraps.

Graham Glasgow has been the only lineman to start all 14 games so far and he’s moved from left guard to center in two games.

Joe Dahl got his first significant playing time this season on Sunday, starting for Glasgow at left guard. He just came off injured reserve last week.

“Joe did some good things out there, and he hung in there pretty well,’’ coach Jim Caldwell said.

Center Travis Swanson (concussion) and right tackle Rick Wagner (ankle) were out and it’s too early to know if they will return on Sunday at Cincinnati.

“I’ve got to give credit to Ron Prince who does a great job with them. I mean, we’ve had more guys in and out on our line than probably as much as anyone I would assume,’’ Caldwell said on Monday. “But what he does and what the rest of our guys do, they just face the challenge. They prepare extremely hard. Even though a guy may not have gotten a whole lot of playing time previously, we treat him as if he’s supposed to play well and supposed to handle whoever he faces like a guy like (Akiem) Hicks, who’s as good as they come up front last week. But I think it’s attitude, determination in terms of their preparation, and the fight of the young men who’s plays for us. So, I think all of those things play a part in it.”

The line is not responsible for all of the sacks, but the blame falls on their shoulders for plenty of them.

Stafford was sacked a career-high 45 times in 2014 and will match that mark with two more sacks.

The line also of course opens up gaps for the run game which has been another issue with the Lions this year.

Caldwell admitted that depending who is starting on the offensive line, they may adjust the play-calling.

“There’s certain things you do that you may not – I think what you have to try to do is try to make certain that you know thyself and then make adjustments accordingly, which we do,’’ Caldwell said. “I mean, that’s at a number of different spots. When you’re up front, there’s some guys that pull better than other guys, so how many times you pull a guy that depends upon how well he does his job. Now, it’s something that you’re always trying to improve upon, but we still try to make certain that we’re judicious and try to be prudent in selection of plays with certain individuals.”

The Bengals defense has sacked opponents 38 times which is tied for seventh most in the NFL. It will be another test for the Lions offensive line whoever it is that may play on Sunday.