Green was a spark in a disappointing run game 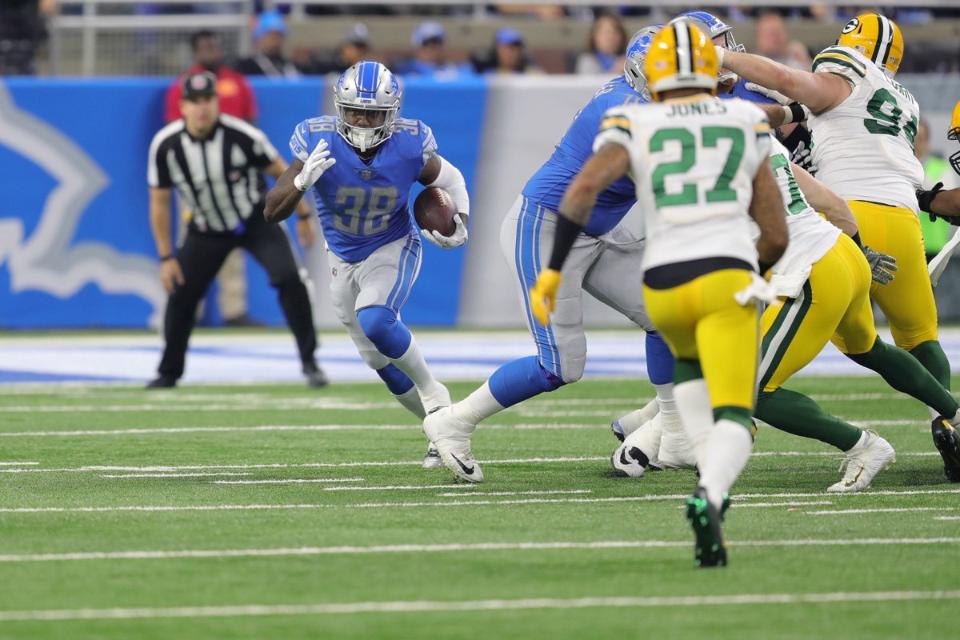 ALLEN PARK — Every Lions player was impacted by Jim Caldwell’s presence from the veterans to rookies like running back Tion Green.

When reporters were walking away after a lively chat with Green on Monday, he said, “Remember about the high cost of low living.”

That’s a Caldwell phrase, a reminder to his team to stay out of trouble.

Green, an undrafted rookie, hugged Caldwell after the Lions beat the Packers on Sunday in what turned out to be the coach’s final game.

A hug was certainly in order for the running back who was on the 53-man roster but didn’t get a chance to play until Week 13. Green didn’t know if it was Caldwell’s final game. He just wanted to hug him.

“I told him when I hugged him yesterday, “Thank you so much for giving me the opportunity.’ Because statistics say, come in with as many as five running backs on the roster, 13 weeks, I thought I was going to be gone any minute. And we were hot early on too. Coach Caldwell gave me an opportunity, I can never thank him enough. Like I told him yesterday, “Thank you so much, you pretty much jump-started my career for me.’ And putting me in the situations he put me in, and keeping me and trusting me and knowing this is the potential this kid has.’’

Throwing Green into the action late in the season was part of Caldwell’s plan all along.

“That man, from the minute I met him on my 30 visit when I came, I was the last visit they had. (Teams are allowed 30 visits before the draft.) He told me, ‘I’m going to take care of you, just trust me.’ He said it was a blind leap of faith. I’m like, ‘What do you mean?’ You have to trust somebody without knowing them as well. He said, ‘Trust that I’m going to take care of you.’

“When he gave me my phone call after the draft, and was like, ‘Look, if you sign with us I promise you I’m going to do this, I’m going to do that, it’s going to take a moment,’’ Green said. “He told me the plan and it worked. So man, I wish the best for Coach Caldwell on and off the field. He was a great guy, a really great guy.’’

Green plans to make a quick visit home to Miami and return within a few days.

“I’m really excited about the offseason. I’m going to stay here, I kept my place in Detroit. I’m going to work on my body and my nutrition, try to develop myself, work on hip mobility, find my weaknesses and continue to try to get better,’’ Green said.

Green could earn a bigger role in the running game next year, although there are plenty of variables.

Even though he was only active in the final five games, he finished as third in rushing yards with 42 carries for 165 yards (3.9 yards per catch).

Green got a real feel for the game in those games.

“It was tremendous, it took me to another different confidence level. I feel like the NFL is all about trust — are you dependable? And it showed me a lot of times in a lot of close games, for a minute, and my coaches left me out there, gave me more opportunities, left me in the pass game, it gave me a lot of confidence that those guys were trusting me and for myself,’’ Green said. “I developed a lot of confidence knowing I was trusted to be out there.’’

His best memory is easy to recall. It was his first NFL carry, in the 44-20 loss at the Ravens.

On first-and-10, he got the ball and scampered for 33 yards. He scored his first touchdown in that same game on a 6-yard run. His mom had flown to Baltimore for the game. It was a storybook beginning to an NFL career.

“It’s like weird — that whole experience not knowing if I was going to be up or down, getting my opportunity and I remember my coach was like, “Thirty-eight, go in.’ I remember seeing the offensive line’s faces and T.J. Lang telling me, “Come on, be our spark, you’re our spark.’ I remember my first carry, just running free. You couldn’t start off a better first game, first career carry, getting the ball running. I was like finally I can showcase what I can do,’’ Green said.

He got advice from Theo Riddick before the game.

“Theo was like, ‘You’ve been doing it your whole life, it’s football. At the end of the day if you’re going to make a mistake make it at full-speed,’’ Green said. “He just said, ‘Tion, run hard and run strong.’’’

He did just that.

Typically an NFL player makes the biggest leap between year one and year two.

Green plans on working hard to make that happen.

“I’m a competitor. Those 13 weeks (when he wasn’t active) were hard, knowing that in a lot of situations I could’ve helped the team,’’ Green said. “Going into this year I want no excuses. I want to show guys I’m trustworthy, third-and-1, fourth-and-goal, goal line, whatever the case may be, first down, second down, third down, that those guys could leave me out there. It’s something I’m really working on trying to learn, especially with the new coaching staff coming in.’’