Matt Patricia a big draw for the linebackers 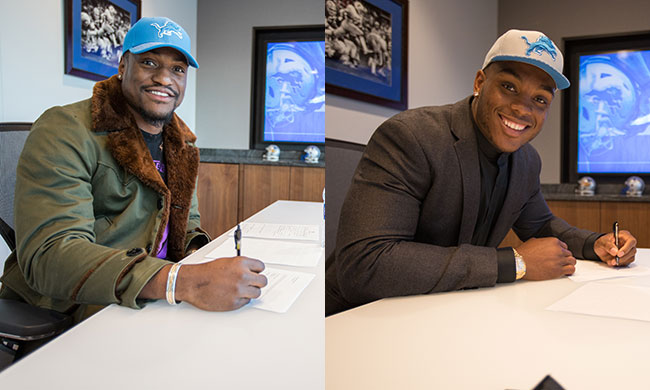 If you’re looking for insight into the Lions defense under coach Matt Patricia, the two newest linebackers don’t seem to have a clue.

Free agent linebackers Christian Jones and Devon Kennard, who signed with the Lions, met the Detroit media via a conference call on Thursday morning.

Both said they weren’t sure exactly what the defense would look like. They also agreed that they aren’t sure how their roles will be defined. Doesn’t seem to matter to them.

The underlying sentiment seemed to be that they signed with Detroit for the opportunity to play with a team that is coached by a defensive wizard.

“As far as Matt Patricia and the defense, I watch a lot of film and I’ve really admired what he’s done on the defensive side of the ball for a long time so I’m definitely familiar with him and just the scheme that he and the success he’s had with New England for so long,’’ Kennard said.

Both seem excited to get to work and apparently memorized the same list of football cliches.

“I thought it’d be a great opportunity. I knew I’d be joining a team that already has things in place. Offensively we all know what they can do,’’ Jones said on the call. “Defensively they have a good core group here that I can come in and help make a little better. It’s just an exciting time for me and I’m glad to be up here and there’s going to be a lot of opportunity.’’

The Lions were short on linebackers after not re-signing Tahir Whitehead and Paul Worrilow who played a ton last season. So these two should get plenty of playing time.

“Obviously the interest of the team and then also opportunity. You want opportunity to play and show what you’re capable of doing and be in a good situation on a team that has some potential. You look at all of that. It’s a combination of everything,’’ Kennard said.

That said, they’re both hoping for the opportunity (there’s that word again) to blitz often.

“Yes that would be great, it’s a  passing league the more pressure you can get on these quarterbacks the better. We’ve got a lot of guys on the team that can get after the quarterback,’’ Jones said. “It should be fun, we’re all working hard trying to get ready for this upcoming season, it should be exciting.’’

Their answers were not scripted but it kind of sounded like that.

“I love the opportunity to put pressure on the quarterback. I think the greatest play in football is a sack cause fumble, in my opinion. Any opportunity to help my team in that way is something I look forward to doing, we’ll see how much if at all I’ll be doing that this season,’’ Kennard said.

Jones, 27, spent the last four seasons with the Chicago Bears. He finished the 2017 season with a career-high 84 total tackles (57 solo), in addition to two sacks, one forced fumble and one fumble recovery. He has appeared in 63 games with 31 starts. He was signed by the Bears in 2014 as an undrafted rookie free agent out of Florida State.

Kennard, 26, was drafted in 2014 in the fifth round by the New York Giants and spent four seasons with them, playing in 52 games with 35 starts. In the 2017 season he finished with 41 total tackles (24 solo), four sacks, two pass defenses and one fumble recovery.

Kennard’s dad, Derek Kennard, played with the Cardinals, Saints and Cowboys. Devon was a youngster so doesn’t remember too much. He does recall racing against Emmitt Smith when he was 4.

“He let me win, so that was cool,” Kennard said.