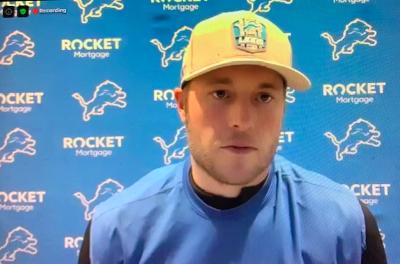 Not only do the Lions face Tom Brady and the Tampa Bay Bucs on Saturday, they will do so without much of their coaching staff.

Due to exposure to COVID-19 this week, interim coach Darrell Bevell, defensive coordinator Cory Undlin and other defensive assistants will not be able to work the game, per NFL rules.

It is a shortened week with the game set for 1 p.m. on Saturday instead of Sunday. The NFL would not push the game back to Sunday due to the coaching issues. If they played on Sunday, Bevell and the others could coach.

It’s been a season like no other thanks in part to COVID and coaches getting fired. Now this.

“It’s been a wild ride,’’ Matthew Stafford said this week.

And it’s not over.

1. Tom Brady may be 43 years old, but he’s still Tom Brady. On Sunday his Bucs were down 17-0 at the half and came back to beat the Atlanta Falcons, 31-27. He’s thrown 32 touchdown passes against 11 interceptions. “With new teammates, learning a new offense, I’m sure it was invigorating, but it’s a huge challenge. When you’re in one system for as long as he’s been in it, I’m sure the new verbiage and all the wrinkles that he had to learn, and then as well to learn new teammates, he’s even doing it a little bit different,’’ Bevell said. “I mean you see him; he’s throwing the ball down the field. People say he can’t throw it down the field, I mean, don’t put anything past that guy because he’s a heck of a player. He’s proved us wrong many, many times.”

2. Matthew Stafford was the big question mark on Sunday due to injured ribs, he played three-plus quarters and was only taken out because he’d done all he could do and it made no sense to keep him in. On Wednesday he said he’s still sore but it’s not any worse. He’s one tough guy so expect him to play on Sunday and the Lions will need him. (See No. 3)

3. The Bucs possess the NFL’s top rushing defense allowing just 77.8 yards per game while the Lions’ rush offense is ranked 30th gaining 92.6 yards per game. D’Andre Swift had a good game on Sunday except for the fumble at the goal line but it will be tough to run against these Bucs.

4. The defense will be tested with Brady. Last week it was Titans’ running back Derrick Henry. Every week it’s something and this group struggles. “We’ve got our hands full once again. It doesn’t change in this league when you play on Sundays – oh, in this case, playing on Saturday. But it doesn’t change,’’ defensive coordinator Cory Undlin said. “… I know these guys are going to show up and we’re going to do everything we possibly can to go out and play a game on Saturday. That’s what I expect. I would expect nothing less from the players either.” Undlin will be sidelined due to COVID exposure.

5. Coaching could be a huge issue. Brady may be licking his chops at playing a defense that is without its coordinator. Although as Stafford tried to find the bright side, he said Brady won’t have a book on the signal caller.

(Note: The game will be aired on WDIV-TV, along with the NFL Network.)