No news on contract extension for the quarterback 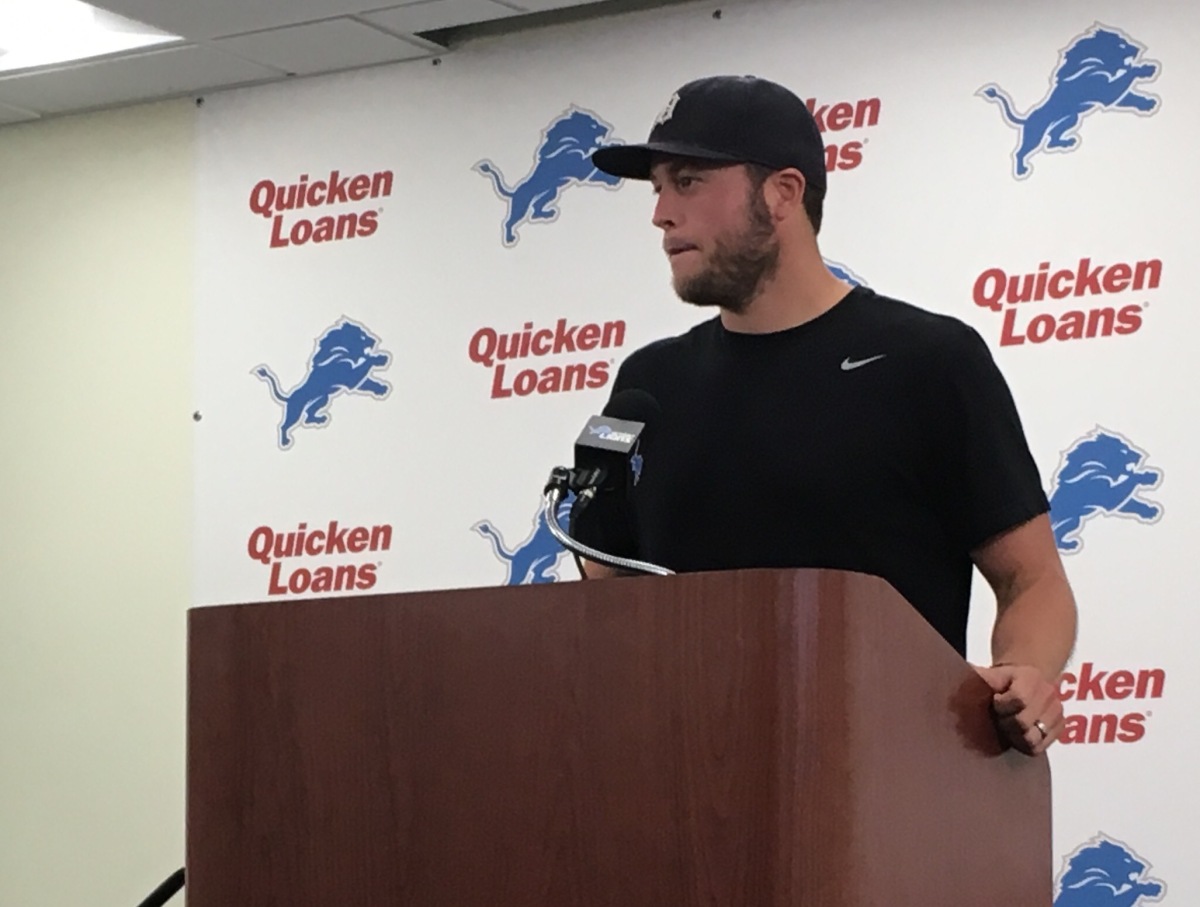 ALLEN PARK >> Matthew Stafford knew the questions were coming before he took the podium on Saturday.

He had no contract extension to announce.

Also, no details on the ongoing talks.

“No timetable. I know that Tom (Condon) my agent and the guys upstairs are continuing talks. That’s all I can really tell you,’’ Stafford said. “That’s why I hired him to deal with that stuff and I don’t have to talk about it except when you guys ask questions.’’

Stafford, who is entering his ninth season with the Lions, has one year remaining on his deal.

“Honestly it’s not difficult for me. I come in every season no matter five years on the deal, one year on the deal, three years on the deal. There’s no difference to me as far as my preparation,’’ Stafford said. “I’m just doing everything I can to be ready mentally and physically ready to go.

No matter what happens I’ve got a year left on my contract so I’m going to be here this year playing football for this team. It’s on my shoulders to be as good as I can to help this team win.’’

Stafford spoke to the media on Saturday afternoon, before the official start of training camp on Sunday.

Here are five other things to know:

1. Coach Jim Caldwell said Stafford is in the best physical shape that he’s been since Caldwell has coached him. “I feel really good physically, I put a ton of work in. I did some extra stuff I hadn’t done in the past. I put some work in with some people I feel like I’m going to benefit from,’’ said Stafford, the dad of 4-month-old twin girls. “As far as with twins it just adds to it, busier than I ever was, keeps you in good shape.’’

2. He worked with a private quarterbacks coach this summer. “It is the first time for me ever since John Stafford (his dad) taught me how to throw a football,’’ Stafford said. “Like I said earlier when you’re competing against yourself to be as good as you possibly can be why not give everything you’ve got, find different people with different ideas that can help you out. I thought it was an opportunity and went for it and enjoyed it.’’

3. That said, he said the changes will not be apparent to fans or media. “Nothing that I feel like you guys would see that would ever make a difference. It’s not only on the field, it’s in the locker room. It’s all of that, it’s all encompassing,’’ Stafford said.

4. He didn’t mention the words Super Bowl when asked about the goal this season, but he tiptoed around it. “Obviously our No. 1 goal is to win the division. You win the division, you’re automatically in the playoffs and then you go from there,’’ Stafford said. “Would love to make a run, it’d be a lot of fun. I feel I, we as a team, have tasted the playoffs but I know it’s going to be special when we make a run and I’m doing everything I can to put us in that position.’’

5. It may be his ninth training camp, but he still is loving it. He sprinkled in the word “fun” throughout his answers. “It’s still exciting every year, every team is different. We have a different group of guys — different 90 now, we’ll have a different group of 53 than we did last year. So that’s exciting,’’ Stafford said. “New players to see and watch develop as far as young guys and new free agents every year to come in and help us right away. It’s still fun for me, still have a blast doing it. As difficult sometimes of a grind as training camp is, it’s still a whole lot of fun too.’’ 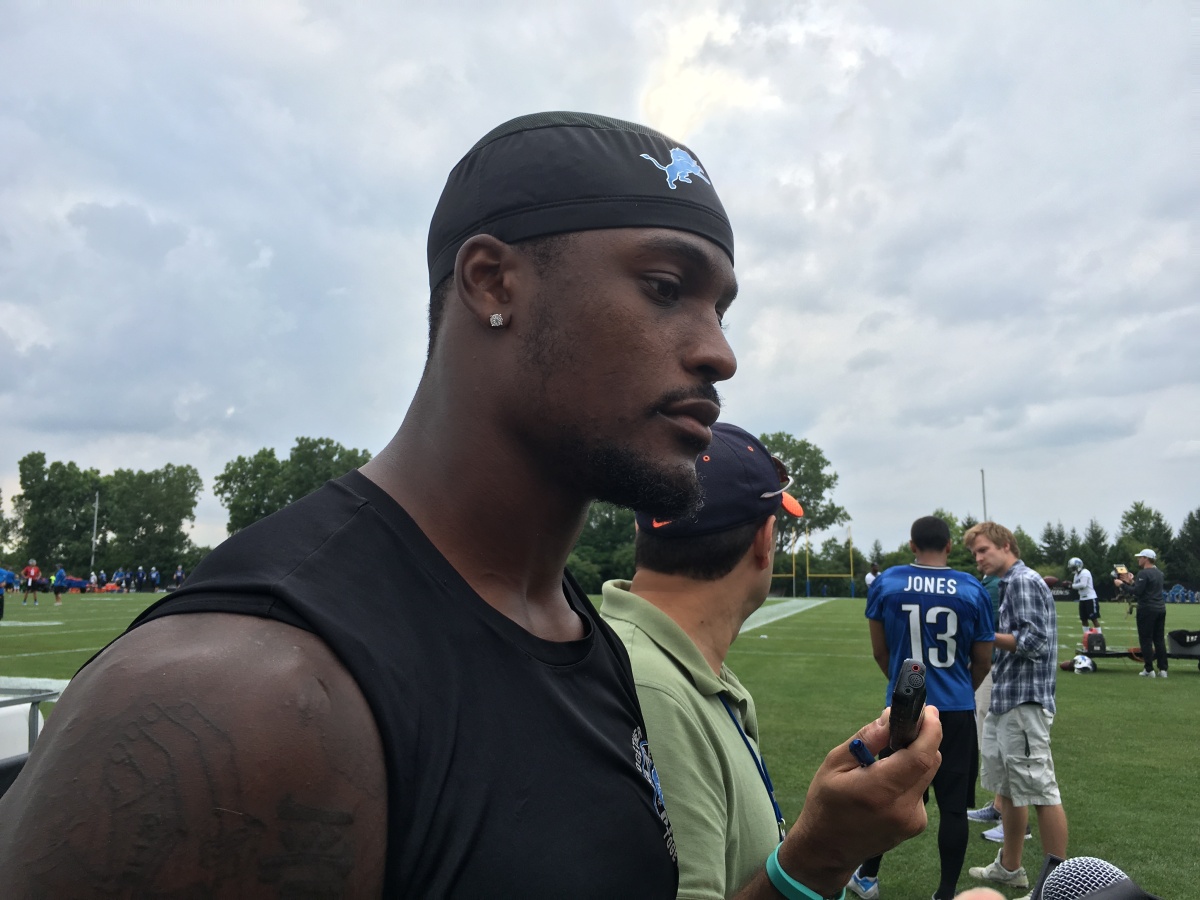 When Lions training camp gets into gear on Sunday, it’s the start of an interesting stretch.

Like every year, there are positions — starters and backups —  that will be determined in camp and through the four preseason games.

And, of course, several are vying to grab one of the 53 roster spots.

Who will excel? Who will suffer an injury? Whose game will drop off?

Here are 10 players (five defensive, five on offense) to watch who are not rookies:

— Safety Miles Killebrew took total advantage of his playing time as a rookie last season. He was clutch in third-down packages. Look for defensive coordinator Teryl Austin to find more ways to get him on the field. He was a standout in the spring.

— Kerry Hyder certainly was not expected to lead the defense with eight sacks last season. Hyder could earn a starting defensive end spot with a good showing in camp. He’s not resting on his laurels, he knows the eight sacks mean nothing at this point.

— Ziggy Ansah, unlike Hyder, was expected to follow up his 14.5-sack 2015 season with as many or more in 2016. He finished with just two. Ansah wasn’t fully healthy to start the season and never really caught up. There is no reason to think he can’t return to Pro Bowl form.

— Antoine Williams worked his way onto the field as a rookie last year too, starting three games. He has a good shot to earn the starting role at strongside linebacker. A good camp and preseason will cement that.

— Tahir Whitehead has lost the starting middle linebacker role to first-round pick Jarrad Davis. Whitehead has been trained at every linebacker spot. So he will be able to handle a move to the weak side.

— Ameer Abdullah looked solid in the spring OTAs after he missed the final 14 games in the 2016 season with an ankle injury that required surgery. Other than Matthew Stafford, Abdullah may have the most important role on the offense which struggled in the run game again in 2016.

— Theo Riddick should be fine but we will see. He missed the offseason workouts after surgery on both wrists. He was still wearing a brace on his right hand in June. He’s ready to go and, like Abdullah, the offense needs him.

— Jace Billingsley hasn’t taken a snap in a regular season game, but he was impressive in the preseason games as an undrafted rookie last year. He stayed around on the practice squad until he was promoted to the 53-man roster with two games remaining. He’ll likely be in a battle for one of the final two wide receiver spots.

— Joe Dahl can play any position along the offensive line. The Lions had so much faith in him that they gave him a look at left tackle after Taylor Decker injured his shoulder in June. Two veteran tackles were then signed giving Dahl a chance to go back to guard where he is more familiar. He could be in a battle for the starting left guard spot.

— Laken Tomlinson lost his starting spot to Graham Glasgow after five games in 2016. The 2015 first-round pick needs to step up. It seems unlikely that he would not make the 53-man roster but there is a chance that he could be traded. General manager Bob Quinn didn’t draft him so there would be no egg on his face if he let a first-round guy go. 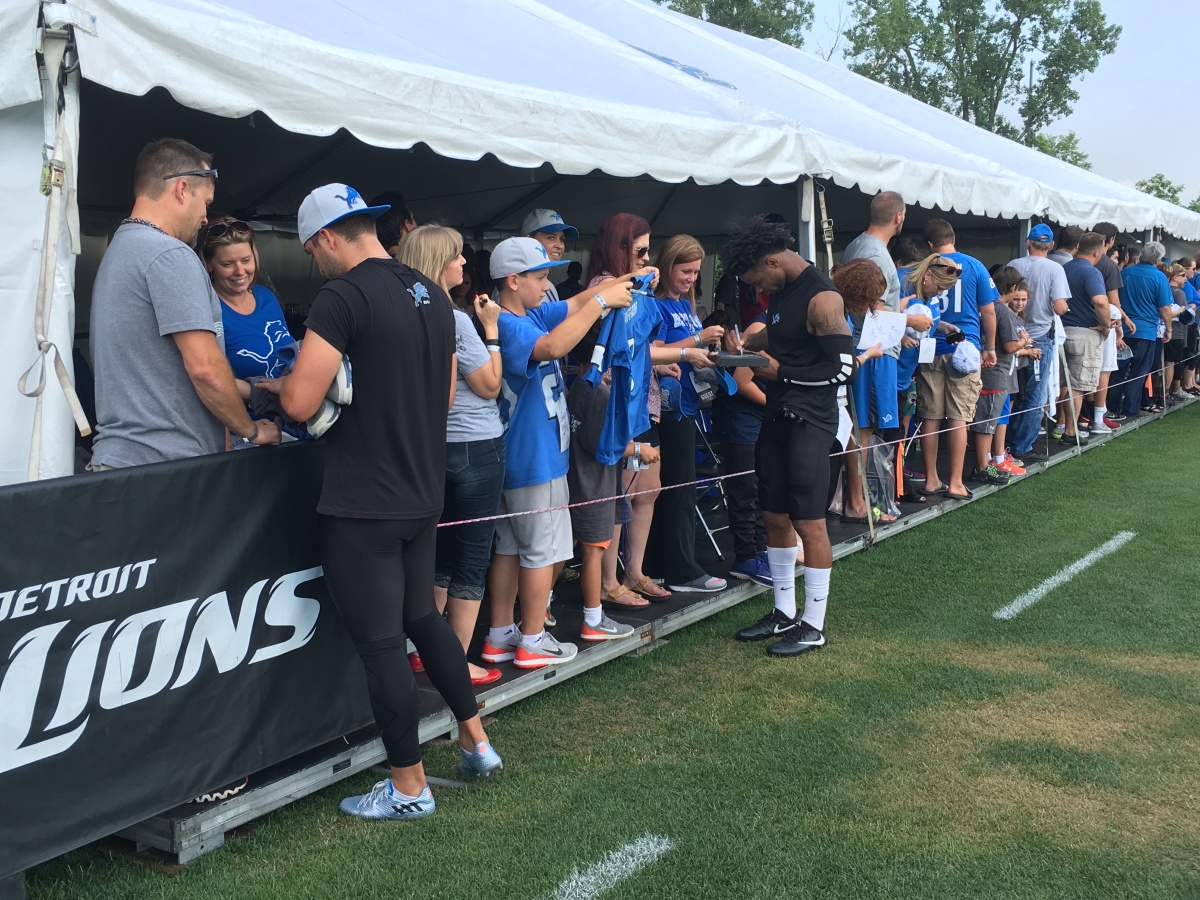 Seven of the Lions training camp sessions will be open to the public starting on Monday, the second day of camp.

The others will take place at the Lions headquarters and training facility. The dates for those are:

The parking situation is different this year. Fans will take a shuttle from the Fairlane Town Center between Sears and Macy’s on the southeast side. Shuttles start two hours before practice. Enter Fairlane Town Center via Burlwood Drive from the Southfield Freeway service drives (M-39 south: Exit 7 Ford Road; M-39 north: Exit 6 Michigan Ave to Hubbard) and follow signs for the blue lot.

Family Day at Ford Field  is also free but requires tickets. Fans can register at DetroitLions.com/training camp or visit any Southeast Michigan Ford Dealer to claim a Lions wristband which is good for a special reserved seating area.