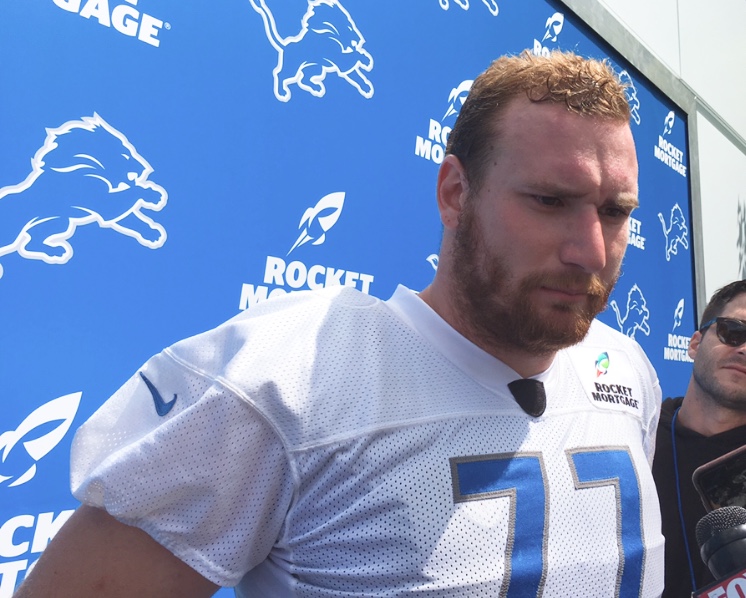 The offensive line has been the focus of GM Bob Quinn since he arrived in Detroit. His drafts and free agent signings could see a payoff this season.

Last year injuries were a factor throughout the season. So far in training camp, health is not an issue.

Obviously strong play by the line is crucial to get the run game on track after last season when the Lions averaged a measly  3.4 yards per carry and just 76.3 rushing yards per game ranking them at the bottom of the NFL.

After four days of training camp, here are five reasons the offensive line will be better this year:

1. The addition of first-round pick Frank Ragnow  (in photo) looks to be huge. Look for him to start at left guard where he has taken most of his reps since OTAs. He did get some work in at center on Monday. That’s likely to give the line more flexibility in case of injury. It is certainly not because he hasn’t played well at left guard. His domination there stood out big-time on the first day of pads on Sunday. He said he’s living his dream and working hard each day to learn.

2. Decker played in only the final eight games last year after suffering a torn labrum in June 2017. The Lions didn’t have much time to find a replacement and really no one could fill Decker’s shoes. He’s back, excited to go and will be ready from the get-go. He won’t talk about last year but is pumped to be on the field in training camp this year. No one is probably happier than Matthew Stafford who was sacked 47 times last season.

3. Continuity is key to the offensive line. Of all the position groups the line needs consistency to play well. This was a huge issue in 2017. Due to injuries the line had 10 different looks in 16 games. It wasn’t just Decker who was out. Graham Glasgow was the only starting offensive lineman to play every game. There is no telling what may happen in the next several weeks or months, but at this point everyone is healthy. That includes right guard T.J. Lang who was coming off hip surgery last season.

4. Glasgow looks to be the starting center. He started last season at left guard but started six games at center giving him invaluable experience at the position. He and Stafford have a better comfort level after last season.

5. Depth is key because injuries happen. The Lions added experience on the line by signing free agents — guard Kenny Wiggins and center Wesley Johnson. Wiggins has played in 45 games the past five seasons for the Chargers where he started all 16 games at right guard  in 2017. Johnson has started 24 games in the past three seasons for the Jets including 15 starts at center in 2017. Brian Mihalik, who played in 15 games and started two for the Lions last year, and Corey Robinson, who played in eight games in 2017 with five starts, return as backup tackles. Also, fifth-round pick Tyrell Crosby, who played left tackle at Oregon, is available although he might land on the practice squad with so many veterans ahead of him on the depth chart.