DETROIT — The Lions’ offense was good but not spectacular, the defense shut down Aaron Rodgers and the Packers for a half and special teams had a good day.

It was the perfect equation for the Lions’ 31-23 win over the Green Bay Packers on Sunday at Ford Field.

Quarterback Matthew Stafford called it a “total team win.’’ It is exactly what this team strives for every week but it doesn’t always happen.

Oddly enough Detroit has beaten two of the best quarterbacks (Tom Brady and Rodgers) and fallen short against lesser teams.

In other words, it’s the NFL.

The Lions jumped out to a 24-0 lead at the half. Yet everyone knew the game was just getting interesting.

Five reasons the Lions hung on to win:

1. Packers kicker Mason Crosby missed four straight field goals and a point-after attempt. The first three misses were from 38, 41 and 42 yards — chip shots. The fourth was from 56 yards. He finally made a 41-yarder when it was so late it didn’t matter. Had he been on his game, the Packers could have won. “So, this one unfortunately was really bad and going to have to really look at this one, and you know this one hurts a bunch.  I left a lot of points on the field for this team and I’m disappointed in my performance,” Crosby said. “And, this is, I look back, I’m thinking in my childhood, you know high school, this is definitely a lot worse.  I’m bummed about that.”

2. The Lions secondary was a patched-up group thanks to injuries and yet effective. Tavon  Wilson was inactive, Darius Slay was injured in the second half but able to return and Jamal Agnew was carted off the field with a knee injury in the fourth quarter. Aaron Rodgers threw for 141 yards in the first half but wasn’t able to get the Packers on the board. In the second quarter he threw a 30-yard bomb to Davante Adams to get to Detroit’s 9-yard line but Detroit’s defense held and Crosby missed the field goal. Rodgers scored touchdowns on the first three possessions of the second half. But then a huge stop came on third-and-15 from Detroit’s 38, forcing a field goal attempt that was missed.

3. Aaron Rodgers was sacked three times and lost two fumbles. It appears the Matt Patricia defense is starting to click. Rodgers can make defenses look weak but Detroit found a way to pressure him. He finished with 442 passing yards and three touchdowns, but it wasn’t enough. Rodgers was taken off the injury list this week, but he was missing two of his best receivers in Randall Cobb and Geronimo Allison. Also the Packers rushed for just 98 yards against the Lions’ rushing defense which is the worst in the NFL. “Defense is hard. It’s always hard every single week going against great quarterbacks, schemes, coaches. They do a phenomenal job and we’re just trying to dial it in,’’ Patricia said. “I think the biggest thing for us is some continuity. Maybe a little bit of continuity here the last couple games, which is good. That helps the communication from that aspect of it.’’

4. Even though they had a 24-0 lead at the half, the Lions’ offense remained aggressive in the second half. That was the plan. Stafford said he and Jim Bob Cooter talked throughout about remaining aggressive. Stafford finished 14 of 26 for 183 yards, two touchdowns and a 101.9 rating. The offense can play to its strengths when playing with a lead. “This is the way you want to play the game, out in front and to not have to come back. I just think that we had a great week of practice and it showed in the game,’’ Stafford said. Wide receiver Kenny Golladay had the gaudy numbers with four catches for 98 yards and a touchdown.

5. Once again, the run game helped balance the offense. Veteran running back LeGarrette Blount was signed as a short-yardage back and he got the job done on Sunday. He ran for a yard to convert a third-and-1 and then rammed through for a one-yard touchdown run early in the first quarter. He had a dozen carries for 22 yards and a pair of touchdowns. Rookie running back Kerryon Johnson’s first scamper was for 16 yards and he finished with a dozen carries for 70 yards (5.8 yards per carry). Johnson injured his ankle early in the fourth after a 24-yard run that led to Stafford’s 5-yard pass to Kenny Golladay for a touchdown to vie the Lions a 31-14 lead. His ankle was taped up but he didn’t get back into the game. 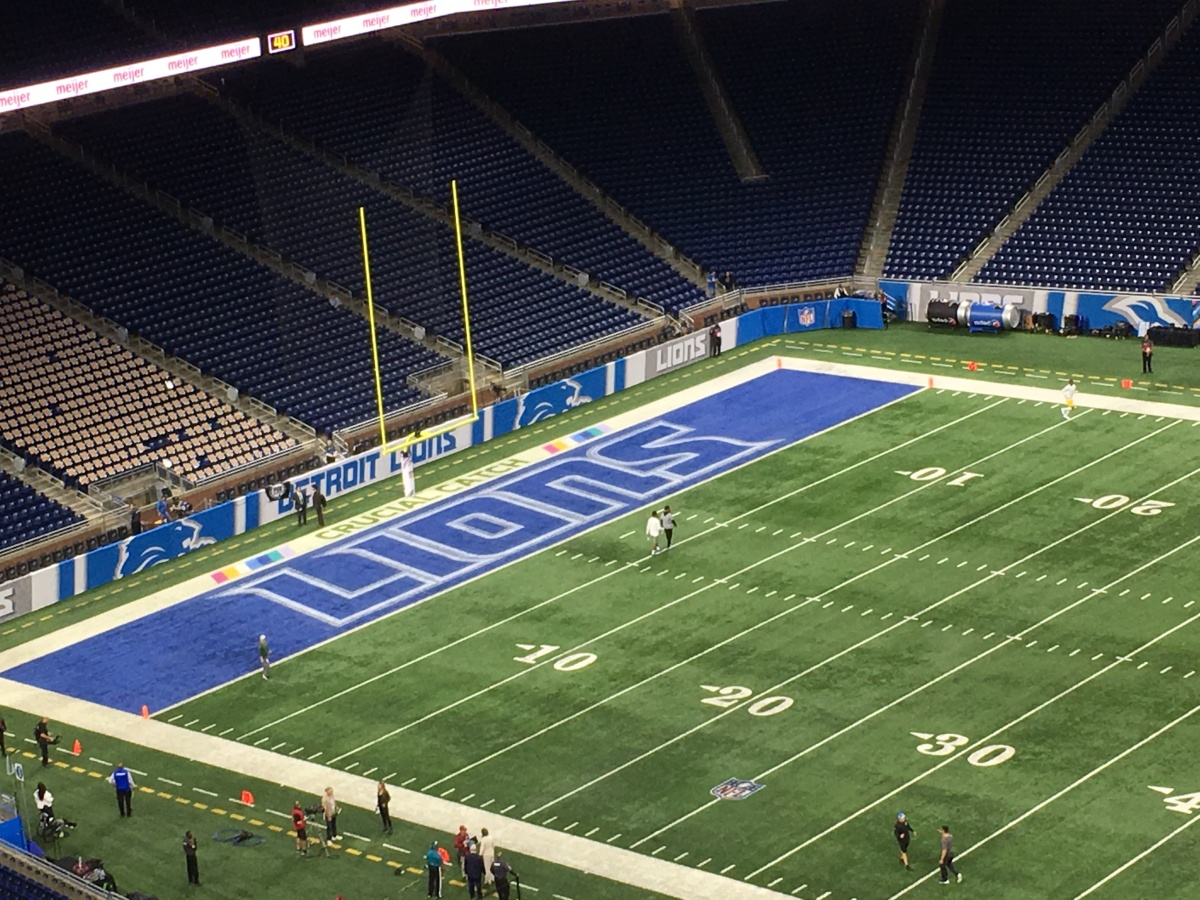 DETROIT — Defensive back Quandre Diggs, who broke his hand in the loss at Dallas last week, is active today against the Green Bay Packers at Ford Field. Diggs practiced all week with a cast on his left hand.

Lions running back Ameer Abdullah is active against today. He could see his first action this season after he was healthy but inactive the first four games.

It’s the fourth straight game that Ansah has missed since he was injured in the opener.

For the Packers, Randall Cobb and Geronimo Allison, two of their top wide receivers, are inactive. That leaves Davante Adams and three rookie wide receivers as targets for Aaron Rodgers.

A loss would drop Detroit to 1-4 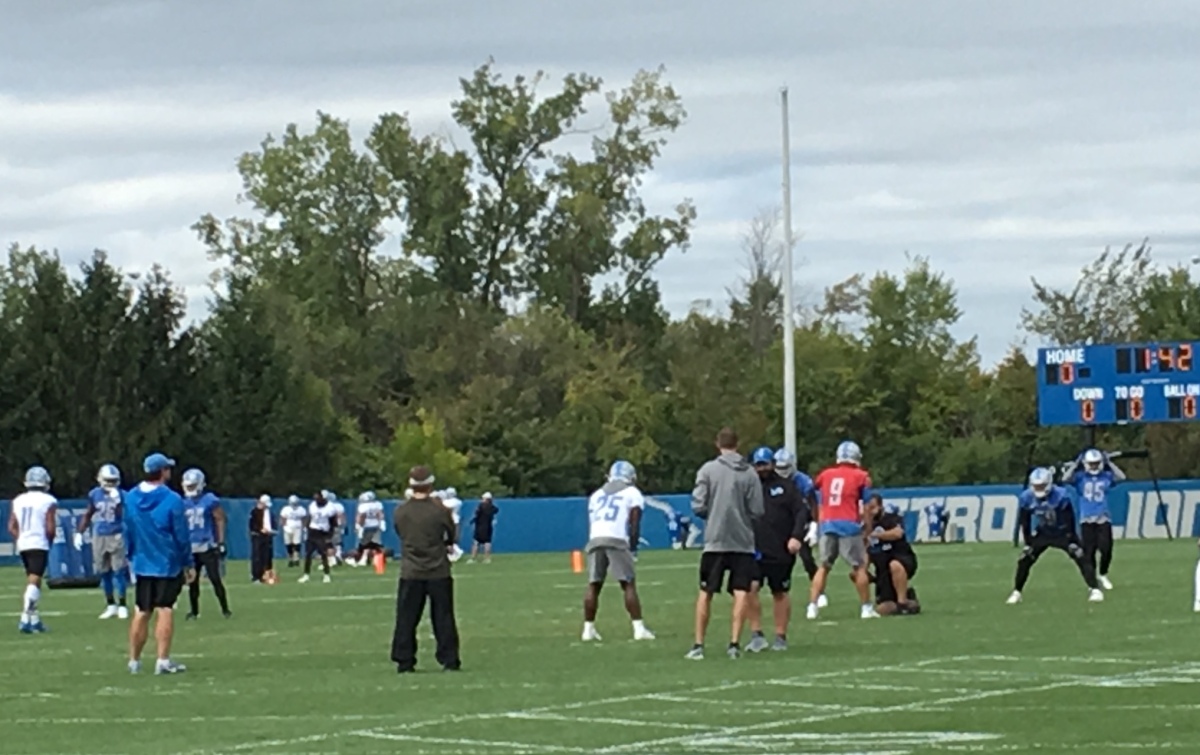 ALLEN PARK — It is huge. The Lions face the Green Bay Packers in their first NFC North game this season on Sunday at Ford Field.

“Division games they count two, so obviously we’re not in the spot where we want to be right now but getting a big division win against GB is huge. We get a win in our column, we’re able to give them a loss in their column. That’s huge,’’ safety Glover Quin said.

Detroit owns a lousy 1-3 record while the Packers stand at 2-1-1 despite the gimpy knee of quarterback Aaron Rodgers who was injured in the opener. This will be Green Bay’s third divisional game — they tied with the Minnesota Vikings and beat the Chicago Bears.

If Detroit drops to 1-4, the season isn’t over but even making it to 8-8 would be challenging. And remember this is a team that finished 9-7 last season which resulted in the firing of Jim Caldwell. General manager Bob Quinn said at the time he thought they were better than 9-7 so he hired Matt Patricia.

And here we are.

Five things to watch as the Lions face the Packers:

1. Even on one leg, Aaron Rodgers has been effective throwing seven touchdowns against just one interception. His top three wide receivers have been on the injury list this week — Davante Adams and Geronimo Allison are questionable while Randall Cobb has been ruled out. “(Rodgers) will be moving around very fast. He’s an extremely athletic player even if you go back to the Washington game where you can say he wasn’t moving as well but he still scrambled and ran for first downs on third down and no one could catch him,’’ Patricia said. “So, this guy is very dangerous when he’s out in space. This guy can make and create a lot of plays not only with his arm, but with his legs.’’ Rodgers is 13-3 against the Lions and, of course, threw the Hail Mary game-winning touchdown pass in 2015 that took the air out of Ford Field.

2. The Lions have not been able to stop the run. Period. They rank 32nd in the NFL allowing 157.8 rushing yards per game. There really is no excuse. Safety Glover Quin this week said they’ve had too many missed tackles, among other issues. He said more film work and concentrating on this in practice is the way to improve. Packers running backs Jamaal Williams, Ty Montgomery and Aaron Jones were watching film too. “They do a really good job of creating space and separation in the defensive front and a little bit of a zone and stretch run team. Those guys are very explosive backs that do a good job of getting into the secondary very quickly,’’ Patricia said. “And the guys up front do a real good job blocking and obviously the backs are taking advantage of that and finding space. But, definitely a big part of their offense is their ability to run the ball, which obviously opens up the rest of it for them in the passing game.’’

3. Matthew Stafford needs five passing touchdowns to become the all-time leader in that category against the Packers. Five in one game would be a ton, but it shows that he has had success moving the offense against the Packers, if not beating them. Currently Johnny Unitas is tops with 34 touchdowns and Fran Tarkenton is second with 33. Stafford has been on solid ground after the opener when he threw four interceptions. For the first time in his career, Stafford will be facing the Packers with a defensive coordinator not named Dom Capers. Mike Pettine has taken over the Packers’ defense. “I wouldn’t say it was easier (with Capers), but I was more familiar with what they were all about. Obviously, (they have) a new defensive coordinator this year so I have quite a bit of learning to do on these guys,’’ Stafford said. “Do I know a few of their players maybe better than some non-divisional opponents? Yes, but they have plenty of new guys around, too, to get to know and to learn.”

4. Rookie running back Kerryon Johnson was limited to nine carries last week in the loss at Dallas. There’s clamoring from the Lions’ faithful that he needs to get more touches, but the Lions’ coaches will continue with their plan for the rookie. “Every game’s a little different. You don’t know situationally what’s going to happen with each game from a reps perspective, from a situational perspective, from a match-up perspective,’’ Patricia said. “So, the ultimate goal is just to win the game. That’s the goal each week. That’s what we put all our thought into, all our work into and that’s the emphasis for us.”

5. Injuries will affect both teams. The Lions have ruled out Ziggy Ansah, T.J. Lang and Michael Roberts while the list of questionable players is long. Defensive back Quandre Diggs has been practicing with a cast on his broken left hand so would not be a surprise if he plays. The Packers have ruled out Randall Cobb, but have a half-dozen listed as questionable. Tight end Jimmy Graham and Aaron Rodgers were taken off the injury report.