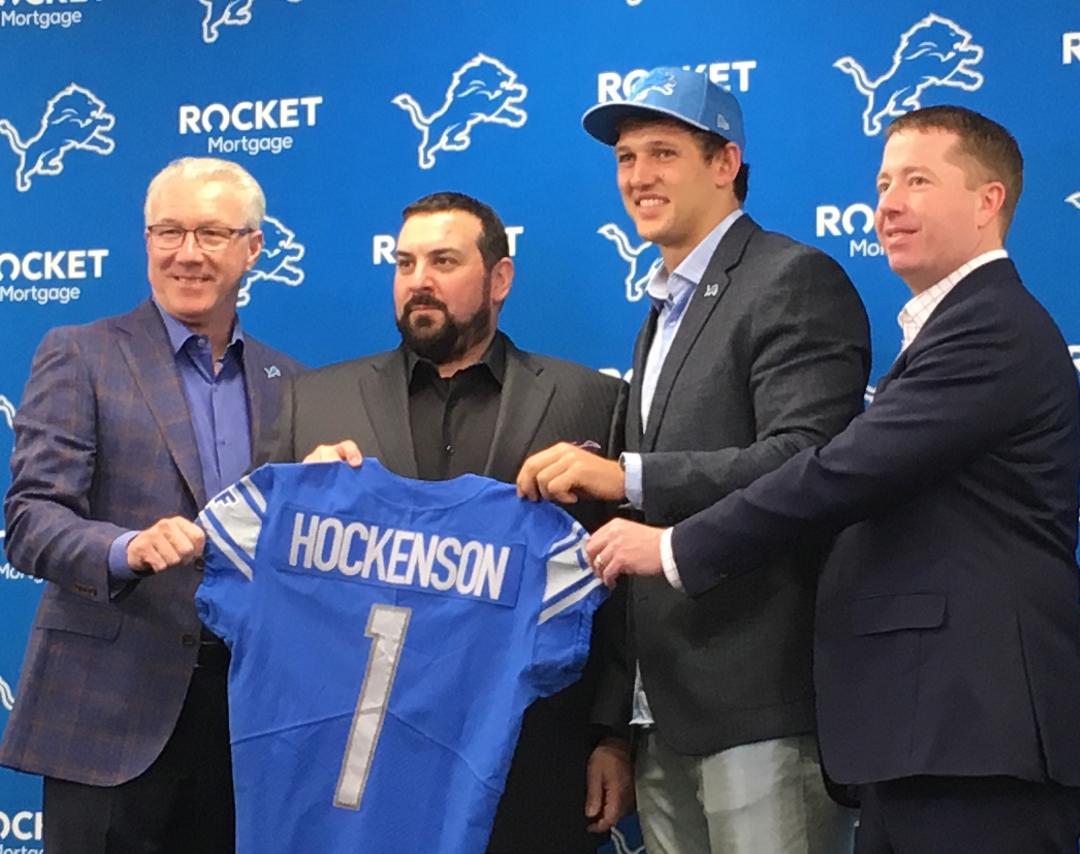 The tight end from Iowa was the eighth overall pick in the NFL draft on Thursday night in Nashville. He and his parents flew to Detroit on Friday and were welcomed into the Lions practice facility.

“We’re very excited about the addition of T.J. When the opportunity came up last night in the draft, he’s somebody we targeted, somebody we knew would be a great fit in our organization, we’re thrilled to have him and his mom and dad here to celebrate just a tremendous achievement but also a beginning and the next phase of what’s going to be a great career,’’ coach Matt Patricia said in his introduction.

The coach said it was a perfect match. They were excited when he was not selected early but didn’t want to get too excited.

Five things to know about Hockenson:

1. The 21-year-old tight end was not heavily recruited out of Chariton but Iowa and Iowa State came calling. “Being from Iowa and being from a small town, growing up and watching coach (Kirk) Ferentz there, I was excited to be a Hawkeye,’’ Hockenson said.

2. At 6-foot-5, he was just 220 when he arrived at Iowa which was way under-sized for a Big Ten tight end. He redshirted his first season. He tips the scales at 250 now. He credits the coaches at Iowa with giving him all the tools he needed to gain weight and strength. “It comes down not only working hard, but having the right tools to do it,’’ said Hockenson who only played two full seasons for the Hawkeyes. Those early practices when he weighed 220 certainly toughened him up. “They’ll definitely get you tougher that’s for sure, they were fun,’’ Hockenson said. “You just have to play the game. When you get knocked down you’ve got to get back up and go back at it and go as hard as you can.’’

3. He’s excited to get going but has to wait a few weeks for rookie minicamp. He’s had a chance to talk with quarterback Matthew Stafford. “I’m excited, he’s such a great quarterback and he’s a great person, just being able to talk to him today, just learning who he is as a person and how genuine he is, I’m excited about learning the game from him and see how he sees it,’’ Hockenson said. “Like I said I’m going to try to be a sponge and figure this thing out.’’

4. It will be a big change coming from Chariton, Iowa, which has a population of 4,122. “It’s cool, the entire community has come together. Last night they had a draft party and able to get a lot of pictures and phone calls,’’ Hockenson said. “I literally think I have 600 text messages right now. I don’t know what I’m going to do I’ll spend next week (going) through them. I’m excited, they’re so excited, they’re happy. I’ve loved my time in Chariton. It’s put me where I needed to be from a small town, I always know I’ll have those people.’’

5. Away from football, he enjoys playing golf and being outdoors. He was pleased and surprised to learn the Lions have a par-3 hole behind their practice fields. He’s also a big Disney fan. He was wearing “Lion King” socks on Thursday night at the draft and his dog is named Lilo from the Disney movie, “Lilo and Stitch.” He’s been to Disney properties a few times. “It’s the best place on Earth,’’ Hockenson said.