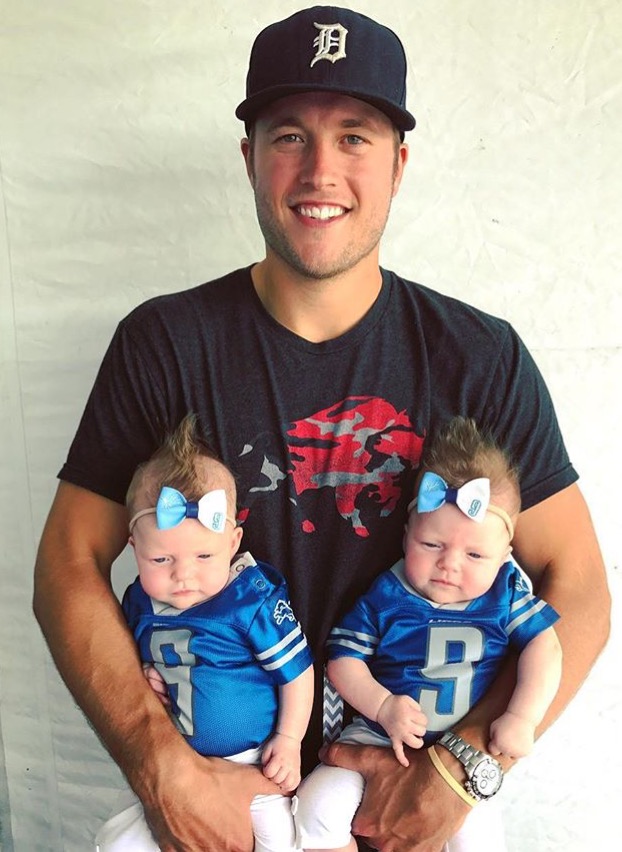 Remember back to the Lions’ 2009 training camp? All eyes were on first-round pick Matthew Stafford who had to beat out veteran Daunte Culpepper for the starting quarterback job. (It seems a little ridiculous now but that’s what coach Jim Schwartz wanted. Stafford wasn’t announced as the starter until Sept. 6.)

While the Lions have many question marks and tough roster decisions to make, concern about Stafford is just not an issue.

The 29-year-old quarterback looks just fine and has rarely missed any throws in camp.

Here are five new things to know about Stafford:

1. Running back Theo Riddick sees a difference in Stafford from last season. “Definitely he’s way more vocal and that’s what we love,’’ Riddick said. “We’re definitely going to need that to see the things that he likes so that we can change and iron out a few things so we’re all on the same page.’’

2. Wide receiver Golden Tate pretty much agrees. “I think at the end of the day in this game you’re getting better or you’re getting worse, you’re never staying the same,’’ Tate said. “Knowing who Stafford is and who we have in this locker room we’re all getting better. Naturally as you get more comfortable he probably shares a little more and micro-manages the guys a little bit more and that’s what he’s been doing. He’s a phenomenal leader as it is and he’s been doing even more of that this year.’’

3. Rookie wide receiver Kenny Golladay has told stories about how Stafford has taken him under his wing, even worked on routes with him after practice. Golladay mostly has no complaints about Stafford’s zip on the ball. “To begin with I’m used to it now,’’ Golladay said.  “It’s pretty much any other ball unless he throws a real rocket in there, then it might be a hard fastball.’’

4. Caldwell just sees Stafford continuing to grow. “I know everybody’s kind of looking for the Holy Grail in terms of something that’s really different. He’s always been a leader. I just think there may be some things that he wants to make sure he gets right and that they understand exactly what he’s looking for and so, I think he’s certainly got to be a little bit more vocal,’’ Caldwell said. “And that happens too when guys get a little bit better, more seasoned, in the system too. But, he’s always taken ownership and I think if you take a look at some film and just go back you’ll see quite often he’s pretty vocal out there.”

5. And a look from the outside on Stafford as he heads into his ninth season. Andy Benoit of SI.com wrote on Wednesday: “Besides continuing to make the big-time tight-window throws that Matthew Stafford has always made (he’s especially deft throwing deep outside against Cover 2), we’ve also seen the 29-year-old QB plays with more maturity in offensive coordinator Jim Bob Cooter’s system. Those ‘wow’ throws no longer come at the cost of wise decision-making. Cooter often puts the Lions in straightforward, static formations. The stillness gives Stafford a clearer picture of the defense pre-snap. It’s the same thing the Colts used to do with Peyton Manning.’’ It’s probably not a coincidence that Cooter and Caldwell spent significant time working with Manning.