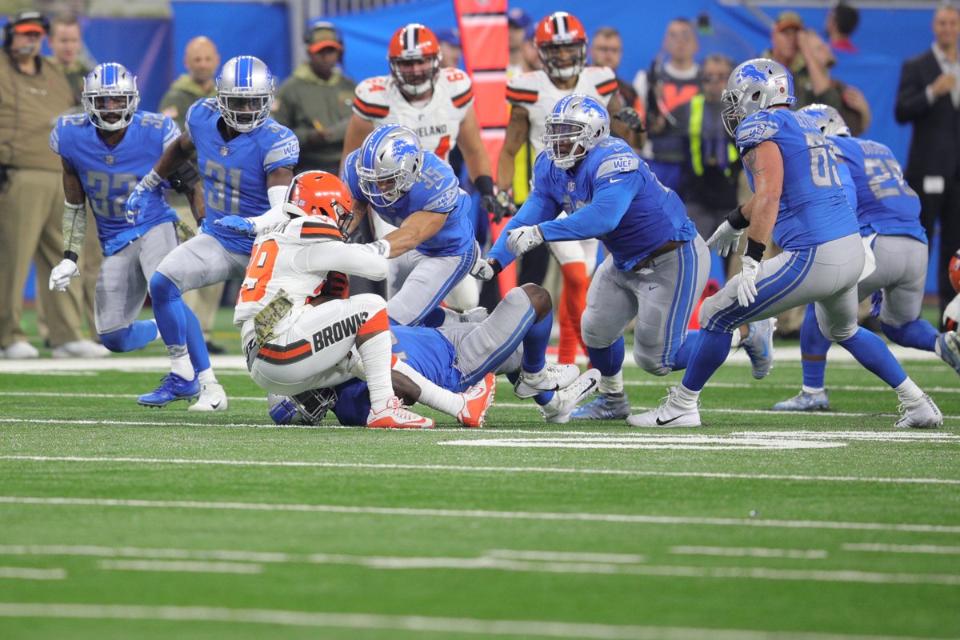 ALLEN PARK — It’s tough to evaluate the Lions defense because one week it looks almost unbeatable and the next it gives up 201 rushing yards to the Cleveland Browns.

That was last week and this Sunday the Lions face the Chicago Bears who depend on the run especially with rookie quarterback Mitchell Trubisky as a starter.

“That’s a little bit frustrating because then I always go back and the first thing I look at is not our guys, I look at what did I do because I know we can play. I know we can play sound run defense, and we didn’t do it that week, that particular week,’’ defensive coordinator Teryl Austin said. “So, like every game, good and bad, you go back and look at it and say, ‘Hey, what are some things that you have to do better this week?’ Because obviously if we allow this group this week to rush for 200 yards, it’s going to be a long day just like it was last week. We had a real struggle last week because we weren’t doing a good job in stopping the run.”

The Bears average 121.8 rushing yards per game, but in the last three games they’ve averaged 152 rushing yards. Turns out the Lions defense is not the only inconsistent factor in this game equation.

Overall Detroit’s defense ranks 21st in the NFL giving up 23.3 points per game and they rank 22nd giving up an average 349.7 yards per game.

They miss defensive tackle Haloti Ngata, their top run stopper, who is lost for the season. But the game goes on.

Five things to know about the Lions defense as it prepares for the Bears:

1. Austin has the utmost respect for Bears running back Jordan Howard who had 23 carries for 111 yards when the Lions played the Bears in Chicago last year.  “I mean, he ran up and down the field on us, and he is a load. He’s got really good vision. He’ll run through arm tackles. If you jump out of your gap, he’s going to find it. I really like the young man and how he runs,’’ Austin said. Obviously it’d be good to see the Lions’ rushing defense play like they did in Week 5 holding the Panthers to 28 rushing yards.

2. Not unlike the defense, rookie linebacker Jarrad Davis has had his moments. “For most young guys, the first year is kind of a roller coaster, up and down. You’re going to see some really good things, and you’re going to see some not-so-good things. And I think he’s still in that area where there’s going to be games where he looks outstanding. And there’s going to be other games he’s going to struggle a little bit,’’ Austin said. “But the thing I like about him is, he puts in the work so that as the season goes on, you’re going to see the big ups and downs won’t be as big. They’re going to be less. You’ll see he may struggle in a game, but it won’t be big. You won’t be saying, ‘Boy, that was a bad one.’ Things like that. You’ll say, ‘OK, he’s maybe not as good today, but wasn’t really an up and down type ride.’ And I think that’s the biggest thing with him in terms of strides that the ups and downs won’t be as big.”

3. The value of having a top corner like Darius Slay is not lost on Austin. “It’s really nice when you have a No. 1 corner so that when you go into a game, you don’t feel out-matched against their No. 1 receiver, and that’s always a good thing,’’ Austin said. “It is what it is. I think that’s the important part. You have a guy out there that can match up with just about any receiver in this league and hold his own. It doesn’t mean he’s going to win every time, but it means that you’re going to go out there, and you’re not going to feel like, ‘Boy, we have to tilt the coverage every time to this guy,’ and do all kinds of tricks and mirrors and all the different things you have to do to try to slow somebody down. So, that’s where he’s really, really helpful, and he’s really grown this year. The thing I like about him, he’s great attitude, great worker, but he just keeps getting better.” Slay has a team-leading four interceptions so far and seems to be having his best season.

4. Defensive end Anthony Zettel’s improvement this season is without question one of the biggest surprises on the defense. Austin had an inkling this would happen when Zettel came back last spring in superb shape. He liked Zettel when they drafted him in the sixth round, but didn’t necessarily foresee this level of play.  “I can tell you that. Kris (Kocurek) and I went and worked him out at Penn State, and we saw a guy that maybe physically was like some of the other guys, and maybe doesn’t measure up. But we saw he was tough, worked hard. I remember in our workout with him, we put him through the ringer, and we were like, ‘Want to do some more?’ He’s like, ‘I got all day.’ And that’s how he works,’’ Austin said. “And so, I think the point where we thought he might end up having a pretty good year was his offseason. He came back in great shape, better shape than he was obviously through last year, stronger, moved better. And during the OTAs and offseason is where you saw that. Boy, he’s a little bit different than he was last year. Not sure how that’s going to show up til we get to the preseason and everything. And he’s just continued to grow. So, that’s really when you saw the difference when he came back this offseason and was in really good shape, really kind of transformed himself as a player.”

5. Austin said he has not made Pro Bowl votes. “I absolutely am not involved with Twitter. So, I’m good,’’ he said. Darius Slay is trying to whip up votes via social media.