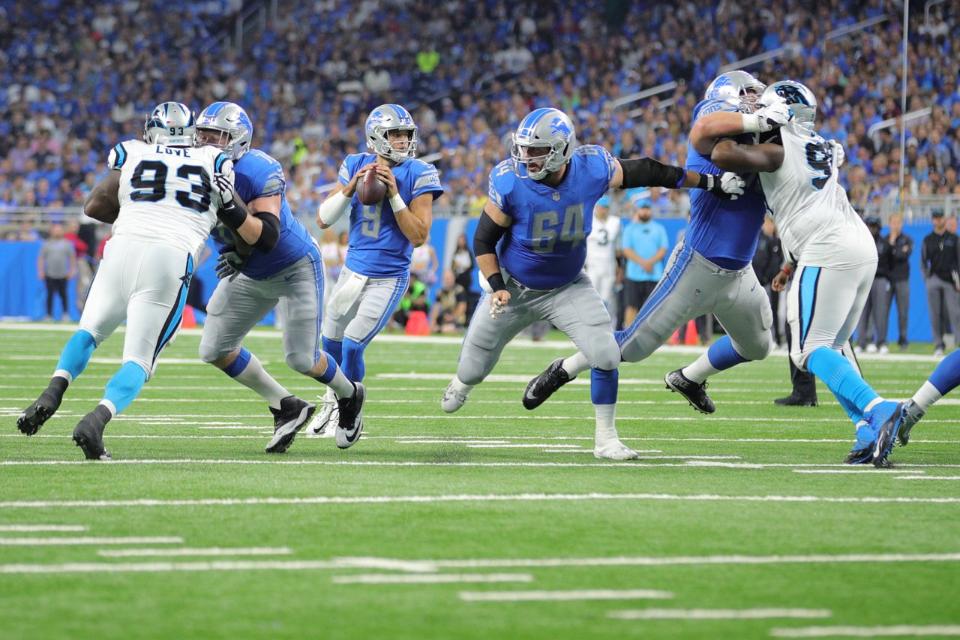 ALLEN PARK — It would be easy to overlook the Chicago Bears. They’re 3-6 and unlikely to make any noise in the NFC North race.

However, the Lions mantra is one game at a time. Next up they face those Bears at Soldier Field on Sunday afternoon.

The Lions (5-4), who have won two straight, have to keep stacking wins if they hope to overtake the Minnesota Vikings (7-2).

They’ve practiced outdoors all week — even in pouring rain on Wednesday — to be ready for any weather condition they may face at Soldier Field.

“I played in a bunch of games there. I played early in the season, played late in the season. Like you said you never know what you’re going to get. That’s how we’ll prepare. You got to go out there and see the way the game’s unfolding, see the way the weather is either affecting the game or not affecting the game,’’ quarterback Matthew Stafford said. “But our biggest opponent is their defense. From our offensive standpoint, they’re really talented. They’re big, physical guys up front. They can get after the passer, stop the run, and their guys on the outside do a really nice job of keeping everything in front of them. So, we’ll have a good challenge for us to go with whatever the weather brings.”

Five things to watch against the Bears:

1. For the first time this season, the offensive line as envisioned by GM Bob Quinn last spring, will be on the field at the same time. Look for left tackle Taylor Decker to play more than he did last Sunday in his first game back since shoulder surgery in June. Right guard T.J. Lang was out in the win over the Browns with a concussion. The line could prove to be a tremendous asset for the final seven games this season starting with the Bears. Coach Jim Caldwell credits his assistant coaches for keeping the line mostly effective no matter who has been a starter. “They don’t blink at a challenge, and you’re presented with challenges all the time in this business. And our approach is, no matter who it is, we’re going to coach who shows up, and our job is to go win a game regardless of the circumstances,’’ Caldwell said. “So, I think they’ve taken that on and worked with it. We haven’t been perfect, but I think we’ve got them headed in the right direction.”

2. Matthew Stafford has been lights out in the last two games with a combined 610 yards, five touchdowns and one interception. He should have more time with the offensive line up to speed. Stafford has won three of the last four contests at Soldier Field with a 17-14 loss last season.

3. The Lions’ run game must be efficient because the weather could curtail the passing game. This is the case every week but it’s critical against at Soldier Field. “I’m not necessarily concerned about how we get it, but the (rushing) yards, the possessions, and all those things are key. I don’t care if it comes in big plays. I don’t care if it comes increment by increment, small bit size. The big thing is to get it going and make certain we’re consistent in that area,’’ Caldwell said. “So, that’s the most important thing.” The Lions have rushed from more than 100 yards in two of their eight games, most recently on Sunday in the win over the Browns.

4. Darius Slay, Glover Quin and the Lions’ secondary should make life miserable for rookie quarterback Mitchell Trubisky who has completed 51.3 percent of his passes in five starts with three touchdowns and two interceptions. He’s somewhat mobile, averaging 22 rushing yards per game. “Right now they haven’t opened it up for him,’’ defensive coordinator Teryl Austin said.

5. Rookie Kenny Golladay is always a downfield threat, same with tight end Eric Ebron. “Well it just adds — you know, the more guys that can make plays, whether that’s underneath, way down the field, handing it to him, tossing it to him, whatever it is. The more of those guys we can put on the field and let impact the game, the better for us,’’ offensive coordinator Jim Bob Cooter said. “That was a really good throw and just a heck of a catch and run after by Kenny Golladay. So, he hasn’t been back with us on the field very long, we’re going to keep him coming and sort of do that with our whole offense.’’ Golladay missed five games before returning in the win over the Browns where he had two catches for 64 yards.