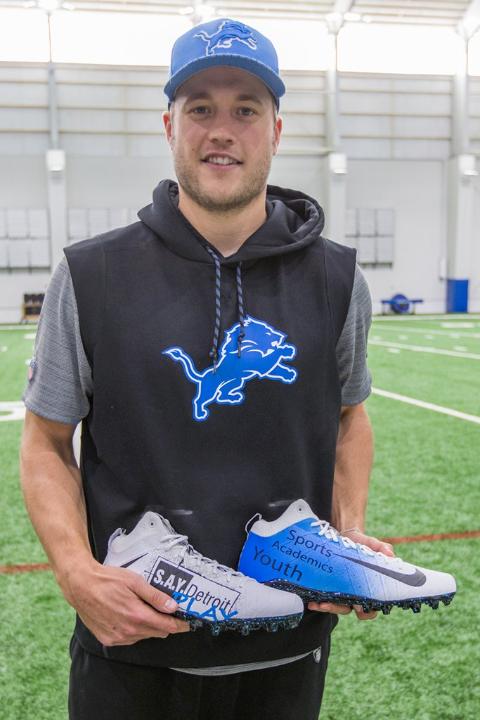 ALLEN PARK — Many of the Lions will be wearing specially painted shoes in the game at the Ravens on “My Cause My Cleats” Sunday.

It won’t be just the players who will be identifying their causes on their footwear.

Coach Jim Caldwell said he was given the option and jumped at it along with several coaches on his staff and general manager Bob Quinn.

“Mine in particular kind of falls in line with my wife and I’s foundation, Jim and Cheryl Caldwell Foundation. My cleats are for the Midnight Golf Program which is one that’s been in here in the Detroit area for quite some time,’’ Caldwell said on Friday. “Reneé Fluker actually started it, and it’s not playing golf at night just in case anybody wants to know. What they use is they use golf to obviously attract young people and kind of teach them how to live their life around the game of golf. But it’s a mentoring, tutoring sort of initiative that really have several thousand applicants, and they choose 250, or 260, or so. And of those individuals, they follow them through their senior year in high school, help them in terms of going on to college with funding. Once they’re in college, it gives them support mechanisms, and then also after college and starting their careers, internships, etc.

“I had an opportunity to go over for the first time and see the young people that have come out of the program, and it was absolutely, unbelievably impressive and so we got involved in it. So, that’s kind of what we’re going to do wear the shoe for the Midnight Golf Program,’’ Caldwell said. “So, it should be a great time I think for all. I know a number of our players are also wearing cleats for different reasons and different causes. So, I think it’ll be certainly well worthwhile.”

Golden Tate will honor veterans with his cleats, while Matthew Stafford will highlight “S.A.Y. Detroit.” Don Carey reps his own foundation while Tahir Whitehead goes with “Downtown Boxing Gym.”