Stafford was not sacked for first time this season at Tampa 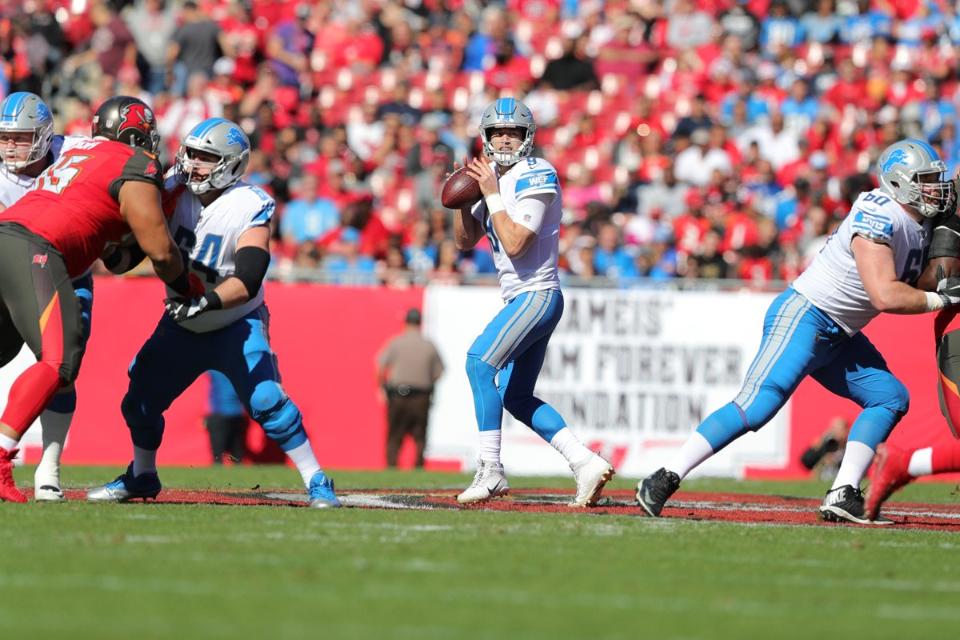 It’s been a rough season for the Lions offensive line.

This group was supposed to be a strength, but injuries have prevented the line playing together as planned except for two games in November.

It started in June when left tackle Taylor Decker injured his shoulder and underwent surgery.

So far Graham Glasgow is the only lineman who has played in every game. He’s typically the left guard but has started for Travis Swanson at center in the two games he’s missed.

It continues through this week. Three of the five Lions who did not practice on Thursday were offensive linemen — T.J. Lang (foot), Swanson (concussion) and Rick Wagner (ankle). Also Decker was limited in practice due to his shoulder.

Although Lang has missed several practices due to injury, he has only missed two games.

“It’s not easy this time of year, it’s a physical game, but (Lang) knows his body, he knows what he needs. It’s great to have a guy that’s been around a bit to be able to step in there who if he says he can go when the doctors concur with that as well, he steps in and does a great job,” coach Jim Caldwell said.

Swanson and Wagner have been ruled out for Saturday when the Lions (7-6) host the Chicago Bears (4-9).

Look for Glasgow to start at center and possibly Dahl to fill in at left guard. Expect to see Corey Robinson or Brian Mihalik, who has played in every game with two starts, to replace Wagner at right tackle.

“It’s just how it is, I mean you have to adapt and adjust. …  I believe you don’t dwell on things of that nature, I mean all you do is handicap yourself. Let’s move on with it, you understand the circumstances, nobody cares about that. The only thing anybody cares about is winning, I’m talking about people outside of our building,’’ Caldwell said. “Certainly, we care about our guys from a physical nature and all that kind of stuff, I don’t want somebody to misunderstand that part of it, but nevertheless, I just don’t spend a whole lot of time worrying about that. Here it is, this is what it is, deal with it, win. Plain and simple, no excuses.”

Despite the musical chairs on the O-line, last week in the win at Tampa Bay was the first time all season that Matthew Stafford was not sacked.

The Lions durable quarterback has been sacked 39 times, tied for second in the league. Only the Colts’ Jacoby Brissett has been sacked more often (48). And still Stafford has the third most passing yards in the NFL (3,683) behind Tom Brady (3,865) and Ben Roethlisberger (3,744).

“We’re just trying to adjust and adapt to our guys and their guys — our sort of pass protection plan to their either pass rush plan or blitz plan. And every one of those things matches up a little bit differently. Our guys up front did a really nice job last week,’’ offensive coordinator Jim Bob Cooter said. “That was not a defense that was going to blitz you 40 times in a game. They were going to mix some big pressures from time to time, but a lot of times we were getting four-man rush. We tried to have the best plan available to block those four guys.’’

Of course sacks are not just the fault of the line, Stafford needs to get rid of the ball in timely fashion and he needs pass protection from everyone else too.

“Our guys up front did a good job. Stafford did a good job getting the ball out on time which requires our receivers getting open on time, and that all kind of worked together pretty well a lot of those times last week anyway, and we need to keep that going. Zero sack games are really beneficial for our team,’’ Cooter said.

And for the health of Stafford whose throwing hand was severely bruised in the loss at the Ravens.