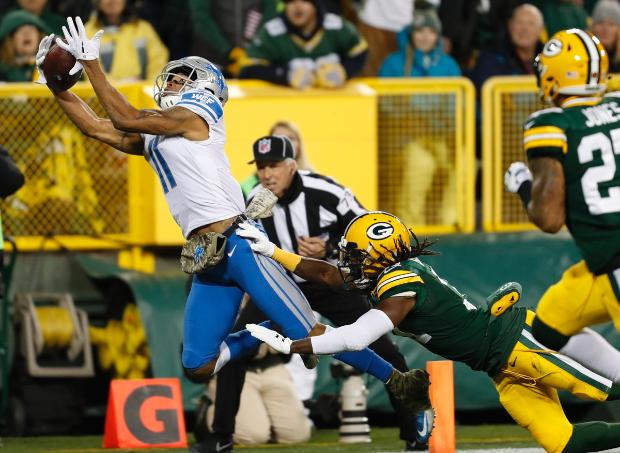 Sunday’s game was supposed to be a huge NFC North divisional match-up with the Lions hosting the Packers in the regular season finale.

And then the season happened. The Lions (8-7) and Packers (7-8) aren’t going to the playoffs, but the game is on at Ford Field on Sunday. Kickoff is 1 p.m.

It is not meaningless.

“Right now, believe it or not, we’re all playing for something. Some guys are playing for their jobs, a spot on the team next year, maybe they move up the depth chart. There is something at stake here, let’s not lose track of that,’’ wide receiver Golden Tate said. “We want to go out and get a win. We want to be 5-1 in our division this year. Beat the Packers twice which has been rarely done. We’re competitive, that’s just how we’re born.’’”

Five things to watch on Sunday

1. Of course the Lions are going to play their starters. This is the NFL — they are only guaranteed 16 games per season and they work hard all year long just for the chance to play in those 16 games. It’s crazy to think otherwise. They are not looking to 2018 and what Jake Rudock can do. They are trying to win their final game this season. Hey, it’s not like they only play veterans throughout the season. They get rookies playing time regularly.

2. The offensive line will start its 11th different lineup Sunday. Center Travis Swanson was placed on injured reserve on Friday. It looks like you’ll see Taylor Decker at left tackle, Joe Dahl at left guard, Graham Glasgow at center, T.J. Lang at right guard and Rick Wagner at right tackle. The line has struggled all season due to injuries. Of all the position groups the offensive line is one that needs to play together regularly.

“You really value playing time playing together with each other as the offensive line. You really value those guys getting reps right next to each other, being able to communicate, being able to adjust as you go during a game,’’ offensive coordinator Jim Bob Cooter said. “These things happen in the League. Different guys play next to each other. If you were able to start the same five guys 16 games in a row in a season, you would hope some of those things would be really clean on the sideline, in-game communication, those type of things. A little bit of it’s just a factor of reps.’’

3. Matthew Stafford will start his 112th straight game. He had a down week in the loss at Cincinnati after three excellent games in which he completed more than 80 percent of his passes. Expect the best from him against the Packers. In their first meeting this season — the Lions won 30-17 at Lambeau on Nov. 6 — Stafford threw for 361 yards and a pair of touchdowns.

4. Ziggy Ansah had three sacks in Cincinnati giving him nine for the season. It is not lost on the defensive end that just one more would push him into double-digits, always a goal for a sack master.  Remember he had just two sacks in 13 games in 2016. His career high was 14.5 in 2015.

5. This could be Jim Caldwell’s final game as the Lions coach. His record in four years is 35-28 in the regular season which is impressive by Lions’ standards. Three other NFL teams came out this week to say their coaches (who were thought to be on the hotseat) will return. General manager Bob Quinn could have done the same, but remained quiet. Caldwell was hired to win a championship and after four years he failed. The players love playing for him and you won’t find a better person than Caldwell. It’s a business, though.