Has similarities to Ziggy Ansah 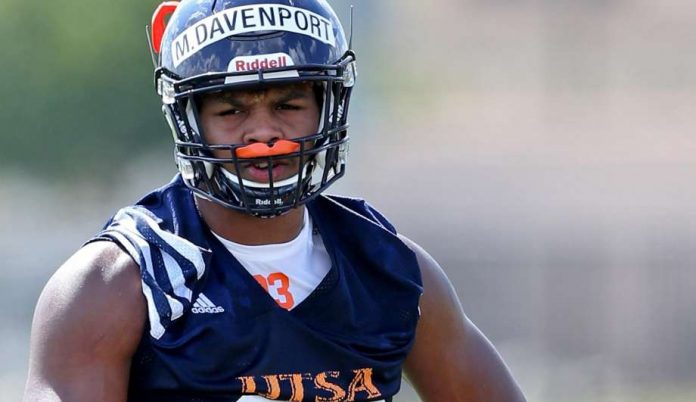 Marcus Davenport makes sense for the Lions to draft with the 20th overall pick on April 26, the first night of the three-day NFL draft event.

The defensive end, who played at the University of Texas at San Antonio, is routinely described as “raw.” He’s 6-5 and 259 pounds — or as the scouts say — long, strong and physical at the point of attack.

In Gil Brandt’s top 150 draft prospects that was posted on NFL.com today, Davenport is ranked 12th with this comment: “Davenport will get better every year and has a chance to become a good pass rusher in the NFL. He’s very athletic and has good character and excellent work habits.”

Detroit’s defensive line is one area that needs help in the draft and, if there’s a good option, it would not be surprising to see GM Bob Quinn select a defensive lineman in the first round. Davenport could be the guy.

Here are five reasons why:

1. If anybody knows Davenport well it’s his defensive line coach from UTSA last season. That would be Bo Davis. Coincidentally, Davis is the new Lions’ defensive line coach under head coach Matt Patricia. Hmmm. So if the Lions like Davenport — and most scouts do — it seems this would be a perfect match if he is still available.

2. Davenport is known as an excellent run defender. That was an area of concern last season for the Lions who were 15th in the NFL last season, allowing 112.5 rushing yards per game.

3. He wouldn’t be the first “raw” defensive end the Lions have drafted in the first round. Indeed, Ziggy Ansah probably had more work to do just to learn the game he had only played for three years. And we know, that worked out just fine. Last season he had 55 tackles with 17.5 tackles for a loss, 8.5 sacks, four passes batted and three forced fumbles.

4. Mock drafts vary widely when it comes to the Lions’ 20th pick. Two of the three NFL.com mock drafts have Davenport going to the Lions.

5. From Charlie Campbell at WalterFootball.com: “Edge defenders with length are always in demand, so even though Davenport needs development, he could be a mid- to late first-rounder. Scouts from over a handful of teams have told me that Davenport is a good player and impressed them in 2017, but they thought a top-16 pick is too high for him. They think the back half of the first round is possible.” If true, this means he could be available when the Lions pick at No. 20.