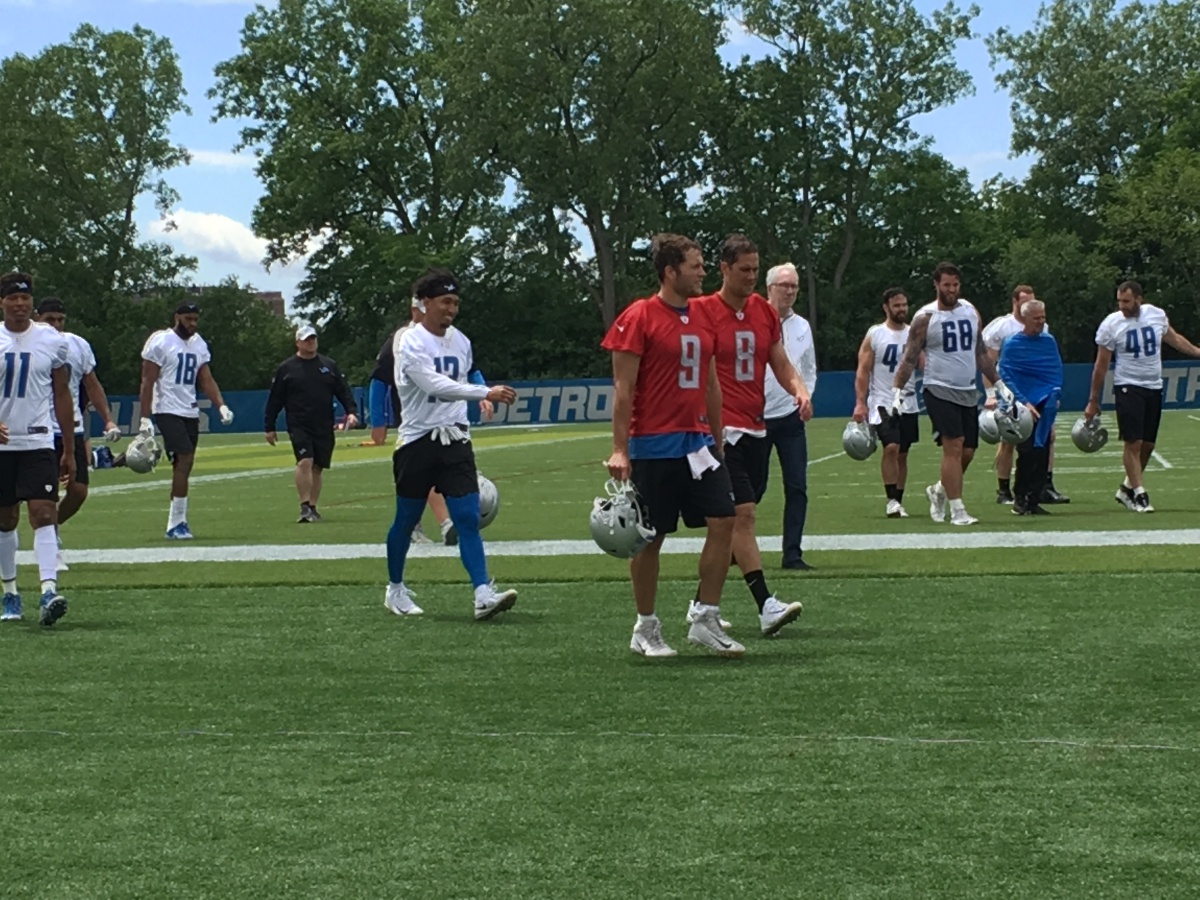 When Detroit Lions training camp gets underway on Friday, the shape of this team will start to reveal itself more than in the off-season workouts.

All eyes will be on first-year head coach Matt Patricia. It’s a big task that he is expected to handle well.

Just like every NFL team, there are plenty of questions at several key positions for the Lions.

Here are five battles to watch:

1. The offensive line, which is so crucial to the run game, is not set in concrete. Taylor Decker at left tackle, Rick Wagner at right tackle and T.J. Lang at right guard are givens as long as they are healthy. According to the snaps during minicamp and OTAs, it appears Graham Glasgow has the edge at center replacing Travis Swanson who was not re-signed. Glasgow started all 16 games last year either at center or guard. Look for rookie Frank Ragnow to get the shot at starting left guard. He’ll have to prove himself. If he doesn’t it’s a huge indictment of Bob Quinn’s first-round draft pick. He played 15 games at left guard at Arkansas but the past two seasons at center. When he was drafted the door was left open that he may be moved back to guard. Joe Dahl is highly respected but he has only a dozen games of NFL experience over the last two seasons. He’d be a solid choice to be a Sunday backup at center and guard but veteran Kenny Wiggins might have something to say about that. The Sunday tackle backup role will likely be a choice between Brian Mihalik, Corey Robinson and Dan Skipper.

2. It’s really tough to judge running backs in training camp due to lack of hitting except on days when they wear full pads. We’ll get a glimpse into how Jim Bob Cooter ranks his running backs by the number of reps each gets. During minicamp and OTAs, rookie Kerryon Johnson looked solid and got plenty of touches along with veteran LeGarrette Blount who is coming off the Super Bowl champion Eagles. Don’t expect Cooter to name one starting back. He’s typically gone with running back by committee and that’s should continue depending on who is doing well and also on the opposing defense each week. Will Ameer Abdullah be on the 53-man roster come September? Good question. It seems unlikely they would keep him around just as a return specialist and not sure there is a role for him. Would not be surprising if he was traded. The versatile Theo Riddick is a lock. Zach Zenner and Dwayne Washington will be battling to stay on the roster. I’d give the edge there to Zenner, but that is not a popular sentiment.

3. The defensive line must be a bit more nimble moving from 4-3 to 3-4 packages during games. That’s the expectation. It’s not one or the other, it’s both. Ziggy Ansah should be motivated to get a new contract after signing as the franchise player. If he’s healthy, watch out. If he’s not, it could be another disappointing season for the big guy and the line as a whole. Anthony Zettel, A’Shawn Robinson should play key roles along with Kerry Hyder who is coming back from a torn Achilles which sidelined him for the entire 2017 season. In 2016 he led the Lions with eight sacks. Can he get back to that form? We will get an idea during camp, but more likely we’ll see what he has in the preseason games. Da’Shawn Hand, a rookie tackle out of Alabama, has a chip on his shoulder after getting drafted in the fourth round. Shoulder chips are a good thing, typically providing even more motivation. It’s tough to get a total handle on the line because of the new defensive coordinator, along with Patricia and a different defensive scheme. There’s a good mix of young guys and veterans like end Cornelius Washington, end Cam Johnson and tackle Sylvester Williams.

4. Linebacker Jarrad Davis is expected to improve in his second season. It’s a natural phenomena that players improve the most from Year One to Year Two. The 2017 first-round pick was thrown in as a starter as a rookie last year and graded out well, for the most part. At times he certainly did look like a rookie but seemed to learn from his mistakes. Now his challenge is to grasp the new scheme. He’s a smart player so there is not much doubt that he will do exactly that. Jalen Reeves-Maybin, another linebacker entering his second season, developed before our eyes during his rookie season, playing in 14 games. Free agent Jonathan Freeny, a former Patriot (2015-16), was signed to bolster this group and add a little veteran leadership. Also Christian Jones and Devon Kennard will be in the mix. Talent does not seem to be an issue for this position group. They key will be finding the right multi-dimensional guys who fit the scheme.

5. Long-time Lions fans know what a relief it is to have a starting quarterback, especially one as talented as Matthew Stafford. The question here is at backup. It caught some off-guard when Quinn signed veteran Matt Cassel as a backup. He looked solid during minicamp and OTAs. Cassel, another former Patriot (2005-2008), was much more accurate than Jake Rudock, the Michigan product who is entering his fourth season with the Lions. Rudock has not thrown one pass in an NFL regular season game while the 36-year-old Cassel has played in 105 games. Remember that part of a backup quarterback’s role is to share what he sees with Stafford on game days. It’s too early to know whether Patricia will keep two or three quarterbacks on the 53-man roster. Much of it depends on depth at other positions.

(More to come on other position groups including wide receiver, tight ends and defensive backs.)