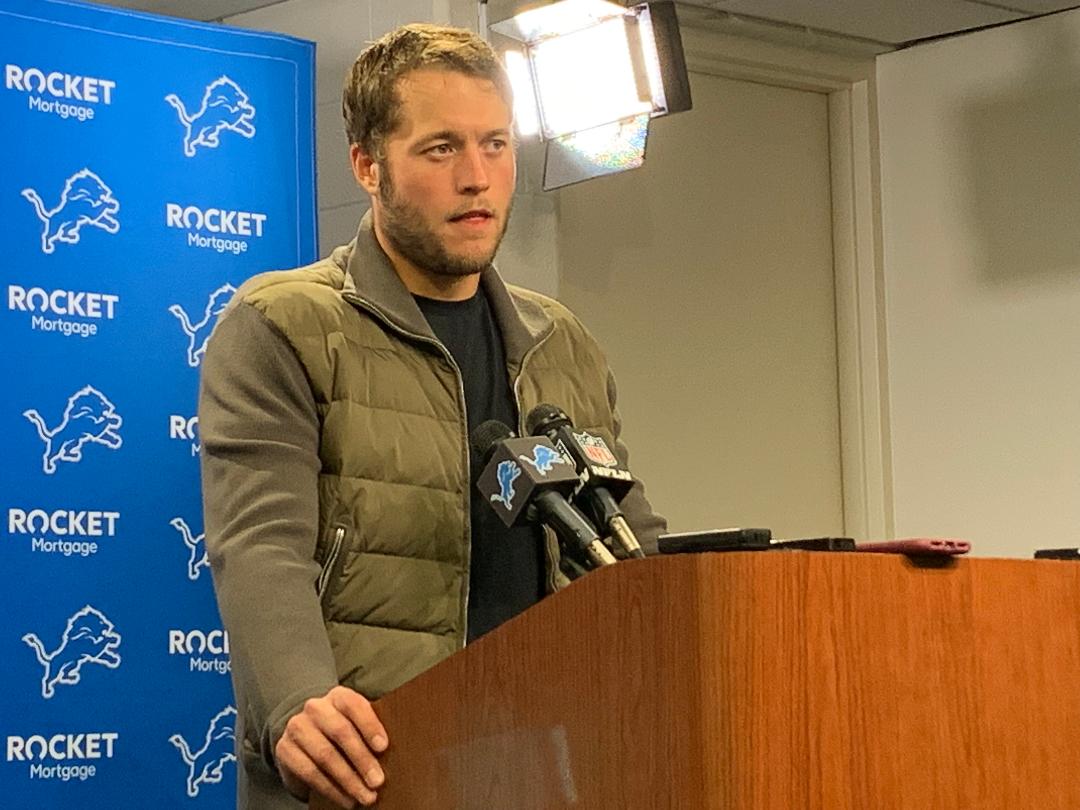 DETROIT — Any talk during the week  of the Lions-Chiefs matchup being a statement game, did not come from the Lions players or coaches.

So it fits that while it appeared the Lions proved they could play with one of the NFL’s elite teams in the 34-30 loss to Kansas City on Sunday, the Lions (2-1-1) didn’t like that storyline.

“I don’t think we need to prove anything to anybody – we love the way we practice, the way we work, the way we come out and play. We’re a good football team, lost to a good football team today,’’ Lions quarterback Matthew Stafford said. “There were a bunch of great plays made in this game, a couple bad plays be each team made in this game, that’s the way it goes in the NFL. It came down to the last 15 seconds, they were undefeated coming into this game, so were we. Somebody was going to have to lose, obviously want to win them all at home, was a good opportunity to beat a good team and we were darned close.’’

Coach Matt Patricia was happy with the fight he saw in his team. “This team doesn’t blink, it just keeps going forward,’’ Patricia said.

Five things to know about the Lions’ loss:

1. The Lions scored touchdowns on two of their five trips to the red zone, but on three others they managed just three points. In the first quarter on fourth-and-7 from the 7-yard line they settled for a Matt Prater field goal. Then in the third quarter Stafford fumbled while trying to make a run on third-and-5 from the 5. The Chiefs recovered. Then Kerryon Johnson fumbled on a first-and-goal from the 1, the ball was scooped up by the Chiefs’ Bashaud Breeland and run back 99 yards for a touchdown (see below). On his fumble, Stafford looked like he was going to make a throw. “I thought Marvin Hall had a chance in the back of the end zone at least a chance to throw it away but I really probably should of eaten it for a sack on third and goal,’’ Stafford said. “Chances of making that play not so good, chances of Prater making a chip shot probably really good. Obviously disappointed I put the ball on the ground.’’

2. Kerryon Johnson took full responsibility for that fumble that led to the Chiefs’ touchdown. “My perspective is, they called it a fumble. We lost three or seven points, which turned into seven points for them, we lost by three points, so obviously it hurt. Big play in the game, we had a lot of momentum going for us, kind of killed it,’’ Johnson said. “I take full responsibility for it.” In a pool report. NFL senior vice president of officiating Al Riveron said: “The officials ruled on the field that they did not see the ball carrier down. They did not see a body part other than the hand or foot down.’’ That’s why they didn’t blow the whistle.

3. To have a chance to beat the Chiefs, Detroit’s run game had to improve and it did. Kerryon Johnson had 26 carries for 125 yards and the Lions finished with 186 rushing yards. “I think for us the run game, we were close last week maybe a couple blocks or details away, we’ll see what the tape looks like, it appears that that was cleaned up … I think the group in general, they want to get better, they’re trying to improve, that’s all you can ask for as a coach, we have to coach them better and keep working with them,’’ Patricia said. In the first three games this season, Johnson finished with 49, 41 and 36 yards.

4. The defense played well to hold quarterback Patrick Mahomes to just 315 passing yards his lowest total this season. Also, he had no passing touchdowns — he’s had at least three in each of the first three games this season.. However, the Lions’ defense would like at least one play back. With 1:55 left and the Lions leading 30-27, the Chiefs had a fourth-and-8 at their own 34. The Lions stop them and it’s likely they could hold on for a win. Instead Mahomes sees a big gap straight down the middle and runs 15 yards to get the first down. Eight plays later, Chiefs running back Damien Williams runs up the gut for the game-winning touchdown. Patricia took the blame on that one, saying he needs to coach better. To their credit their pressure on the previous play (third-and-8) forced an incomplete pass to Demarcus Robinson.

5. It’s not unusual for a Lions team (we’re talking in recent years) to deflate after a big play. That did not happen after that Chiefs touchdown that was returned after the Kerryon Johnson fumble. Stafford tried to help his teammates stay tough. “My point was we score a touchdown there, the game wasn’t going to end,’’ Stafford said. “We didn’t win the game if we scored a touchdown there. They don’t win the game because they scored a touchdown, there was a lot of football left. I think there were 9 or 10 minutes left in the third quarter. There was a lot of football left to play.’’

BONUS on INJURIES: Stafford was questionable going into the game with a hip injury. He didn’t want to talk about it afterward but said it wasn’t the same injury as last season. … Safety Quandre Diggs injured a hamstring trying to run down a Mahomes pass late in the first quarter and didn’t return. Patricia did not have an update after the game. … Tight end T.J. Hockenson had to be carted off the field after he landed on his shoulder and head leaping to avoid a tackle. Patricia said he was in good spirits afterward and did not go to the hospital.