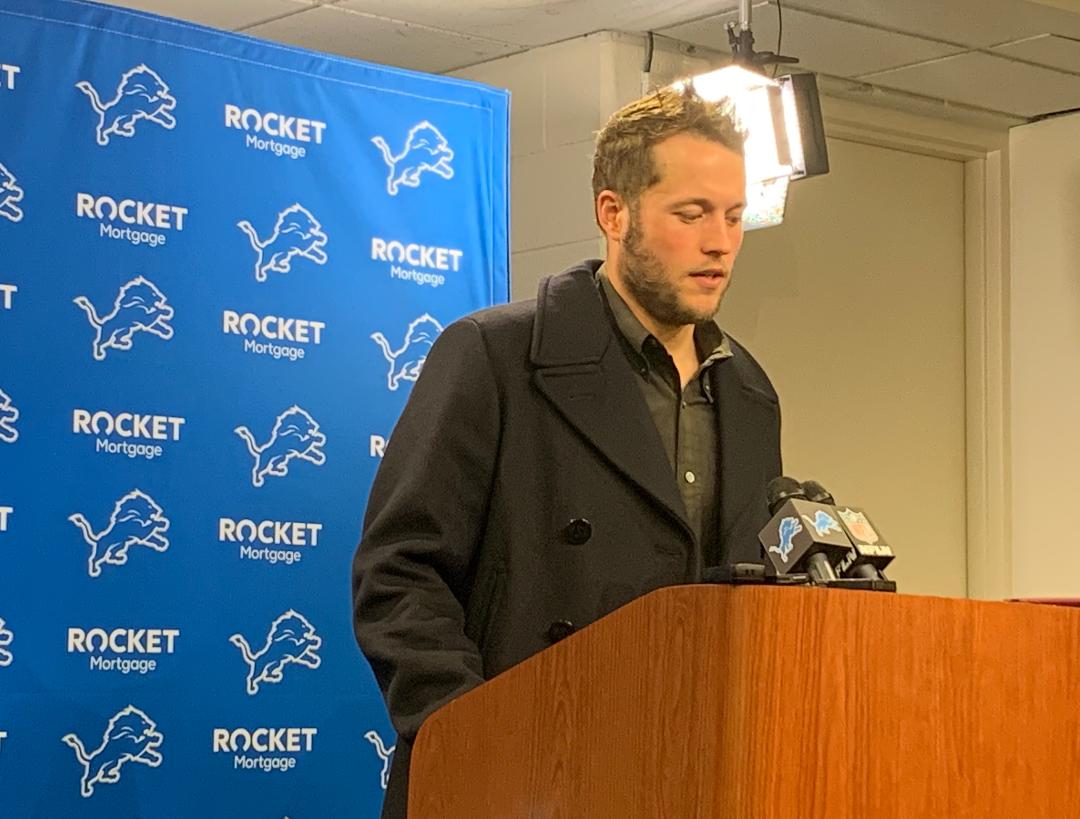 DETROIT — Matthew Stafford has kept his head up and continued to work through the rough start to the season for the Lions.

When they lose, the quarterback shoulders the blame.

When they are victorious — like Sunday’s 31-26 win over the Giants — he credits his teammates.

“He is just a competitive, competitive guy. He always wants to be the best, and he’s great. He works really hard, he’s competitive, he’s tough, he’s grinding it out every single day,’’ coach Matt Patricia said. “He did a great job today, leading the offense and just staying consistent all the way through. He handles pressure really well. You just have to love the guys. You have to love how hard he works, how he battles, and you have to love how tough he is, and he’s smart.’’

Stafford completed 25 of 32 pass attempts for 342 yards. It was his third game of the last four that he threw at least three touchdown passes. He had one blip — an interception — that he is absolutely not happy about.

Five thoughts from Stafford on the win:

1. A flea-flicker play in the fourth quarter resulted in a 41-yard touchdown pass from Stafford to Kenny Golladay with an assist from J.D. McKissic who got the ball first. It’s more proof that offensive coordinator Darrell Bevell looks outside of the box. “I like that’s he’s willing to try those things, put them in and if we execute them (in practice) and they look good, then he has confidence to go out there and just like any other play and call it during the game,’’ Stafford said. “Obviously we had a good spot on the field to call it and got a little bang for our buck and scored.’’

2. Every Sunday a different wide receiver steps up. This game it was Kenny Golladay with a pair of touchdown catches among his 6 receptions for 123 yards. Danny Amendola had eight catches on eight targets for 95 yards. Marvin Jones Jr., had just four receptions for 22 yards after he scored four touchdowns a week ago. “I’m just trying to get the ball to the guy who’s open, to where the coverage tells me to throw it,’’ Stafford said. “I’m trying to read every play appropriately and trust in our guys are going to win. They’re winning a bunch right now and making great plays for me. That’s just what i’m trying to do, I don’t go into a game thinking i’m going to feed this guy or feed that guy.’’

3. Amendola, in his first season with the Lions, has fit right in. He’s Stafford’s kind of player. “He’s doing a great job, I still think he and I can continue to build and be better but he’s doing a really nice job on the inside part of the field,’’ Stafford said. “… He’s just doing everything for us. You guys know what he is, he goes out there, works his tail off, gets open when he’s supposed to get open, makes great catches, blocks in the run game, he’s a guy who does everything right. ‘’

4. Wide receiver Marvin Hall had just one catch but it was for 49 yards and a touchdown. He doesn’t get the ball often but makes big-time yardage when he does. “He’s done a great job, he’s an explosive player. I think I  should’ve thrown it to him one more time, he got behind some guys on another ball I didn’t find him on, he’s done a great job,’’ Stafford said. “He’s smart guy, he’s in the right spot, does the right things, when I’ve given him chances he’s come through. That was a huge play today, third-and-15. Any time you convert that it’s great, to score a 50-yard touchdown on it it’s even better.’’

5. Stafford’s interception came on the Lions’ opening possession on a first-and-10 play from the Giants’ 40-yard line. The ball was intended for Marvin Jones Jr., but Giants cornerback Janoris Jenkins made the play.  “I got totally in-between on how I wanted to throw the ball — whether I wanted to rip it over 21’s head (Jabrill Peppers) or I wanted to throw it in the back of the end zone and let Marv go get it,’’ Stafford said. “And somewhere in-between was not a good place. Poor decision/throw, just a bad play. I was beating myself up pretty good about that one.’’