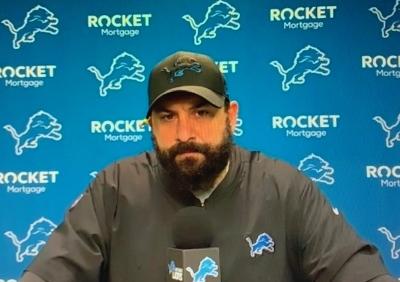 Owner Sheila Hamp was awarded the game ball from the Lions only win this season at practice this week.

Will she add another ball after Sunday’s game at the Jacksonville Jaguars?

Actually, the game ball is not a concern, but beating a 1-4 team at their home stadium tops the list.

If the 1-3 Lions, coming off a bye, can’t beat the Jaguars will coach Matt Patricia still be the coach next week?

Of course Patricia knows the situation. The players do too.

“For us, every week, we’re just trying to go out and compete and win and do everything that we can to get better. We come in, and we do our job. That’s what we do,’’ Patricia said on a Zoom meeting this week. “I don’t think you get into anything other than that, and you don’t ride that wave. You just try to go out and do the best you can that week.”

1. The offense has come out red hot, but can’t keep the fire going after the first quarter. It’s a bit of a mess. It has been lifted by a stronger ground game (thanks to Adrian Peterson), but can do better. They took a closer look at themselves and the team during the bye week.  “As far as things we can do better – I think a little bit of everything,’’ Matthew Stafford said on a Zoom call. “You look at it obviously we can be a little better in the red zone, I think we can be more efficient, more explosive, all of it. I think we’ve done a nice job in the run game, that can always be better. I think we just look at everything and find ways to make ourselves and our team better.’’

2. The 1-3 record is not all on the offense. The defense has failed to pressure quarterbacks. Sacks aren’t the be-all, end-all for a defensive line but they are an indication of whether the line is effective. In four games, the Lions have sacked opposing QBs just five times (they got to Drew Brees twice) while Stafford has gone down a dozen times. Not a great ratio.

3. Jags quarterback Gardner Minshew has played well even though they’ve lost four straight. He’s thrown 10 touchdown passes against just four interceptions, completing 69.9 percent of his passes. “I think he’s done a great job of showing that he can really be quite dynamic in the passing game. We know he’s athletic. He has a very strong arm. He does a good job with the deep balls, (he has) some phenomenal skill players around him that can run vertical, get open, big-catch-radius guys. He has that element of athleticism so they can mix in some of the read-option stuff with him too, and certainly the extended plays that he gets out of the pocket on scrambles are outstanding,’’ Patricia said. The second-year QB will pose a challenge for the Lions secondary which will be without cornerback Desmond Trufant (hamstring). D.J. Clark, the Jags’ top receiver is questionable with a sprained ankle.

4. Guard Joe Dahl is back after recovering from a groin injury and could get the start at center. Center Frank Ragnow (groin) was listed as questionable in Friday’s report but did make the trip to Jacksonville. If Ragnow is a go, then Patricia has to decide whether to let Dahl or Halapoulivaati Vaitai start at right guard. “I think it’s great for us to have our guys healthy and get back out there and compete. Certainly, Joe has been working really hard to get back on the field and he’s got to get out there and practice and kind of get back in the swing of things, but we know how good of a guard he is, and we know how good of a player he is for us,’’ Patricia said.

5. All the talk about consistency and execution is swell, but we’ve heard it for years. Years. Time to put it to work and beat the Jags. No more excuses.