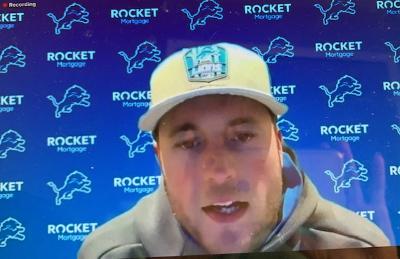 With a win at the Carolina Panthers on Sunday, the Detroit Lions (4-5) could make it back to .500. Injuries, particularly on offense, will make that a tougher assignment even against the Panthers (3-7) who have lost five straight games.

Detroit’s offense has been dinged. Quarterback Matthew Stafford (injured thumb on his throwing hand) is questionable, but knowing his history, odds are he will play.

Not the same story for rookie three others who have been declared out — running back D’Andre Swift (concussion), along with wide receivers Kenny Golladay and Danny Amendola who both have hip injuries.

1. Stafford who put the offense on his shoulders last week in the comeback win over Washington, still will have a talented bunch surrounding him if he plays. Adrian Peterson and Kerryon Johnson will step up, same for Marvin Jones Jr, Marvin Hall and Quinten Cephus. Stafford has been limited in practice this week with the coaches trying to find a good balance. “It’s a little bit of a – rest is good, but reps are good. So, trying to balance that all the way out,’’ coach Matt Patricia said. Stafford didn’t get into much detail this week about how the injury could affect his passing.

2. The offensive line, which has suffered its share of injuries in the first nine games, has come up big. It was most notable against Washington’s front four last week. “I think some of the things that they’re doing in practice, some of the time that they get to spend with one another, playing next to each other, it’s been a mix,’’ Lions offensive coordinator Darrell Bevell said. “We’ve had to move guys around a lot, but with that, I think it made each and every guy more comfortable with the guy that plays next to them. We’re moving it around in practice all the time, trying to keep the guys – one, trying to keep them healthy, and two, trying to give them some good looks with guys next to them.’’

3. Even though Detroit is coming off a win, the defense still has plenty of work to do especially in the second half. Against Washington the Lions gave up 21 unanswered points in the second half. “I don’t think we’re struggling to play together. We just got to play better. I don’t know if it has anything to do with us – I think we play together whatever it has been, nine weeks now, I think we’ve got a good feel for that,’’ defensive coordinator Cory Undlin said. “Not that we played perfect in those nine weeks, but if I had an answer for – I wish I had the answer for having a lead and then kind of turning down the dial, the game plan didn’t really change that much from the first half to the second half. We played lights out in the first half, kind of (un)played exactly how we talk about it all week. We’re going to have to tackle the check downs. They might get some yards, but proud of them how they stepped up down there once they crossed the 50 in that first half. Made some plays and then held them to three points, and then we came out in the second half and tempo got us.’’

4. The Lions are preparing to face quarterback Teddy Bridgewater, who is questionable to play with a knee injury.  “First of all, his mobility is really difficult, and I would say more than just when he gets out into open space. He does a great job in the pocket,’’ Matt Patricia said. “I think those are – quarterbacks that move really well in the pocket and kind of have that strength to move around and not get pulled down by an arm tackle or knocked down by maybe some pressure from one side or the other, and his ability to move, to get into some open space, and then redirect his eye downfield, I think that’s where he just becomes very dangerous. Now look, he can take off and run and then you have a bigger problem when he’s in space, but I think that’s the part to me that’s the most impressive, is when he moves within the pocket, finds that – I’ll call it that little open space for him to settle in – and then get his eyes downfield and find his receivers.” Bridgewater has passed for 13 touchdowns and 7 interceptions this season.

5. Stopping the run has been a tough task for the defense, but they look to catch a break with Christian McCaffery who will miss his second straight game with a shoulder injury. However, Mike Davis could pose a challenge.  “I think Mike Davis – this guy is a really good running back. This guy is strong and powerful. He’s a great cut-back runner, but he can also bounce out to the edge,’’ Patricia said. “So you have to be very disciplined in the run defense or otherwise this guy will hurt you very quickly. He has good speed.’’