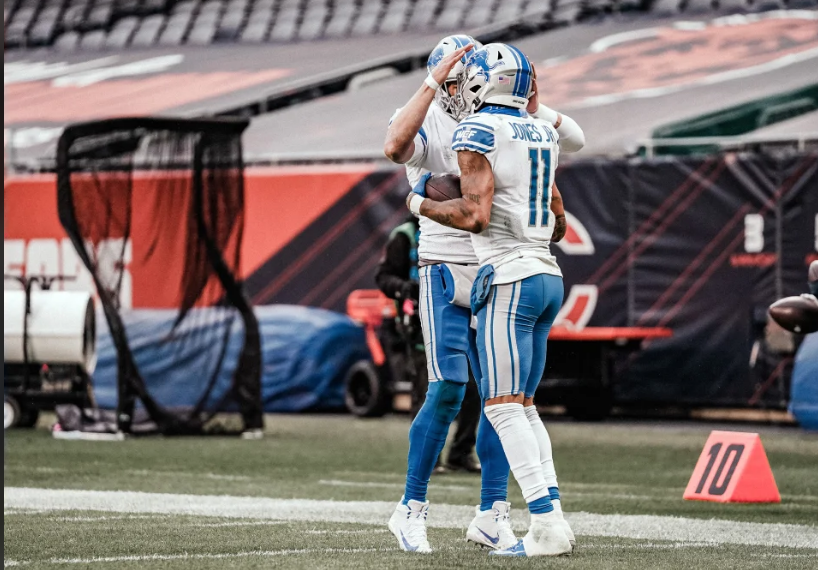 In Darrell Bevell’s first game as Detroit Lions interim coach, the Lions made a fourth-quarter comeback to remember. Certainly, it will be one sweet memory for Bevell whose head was spinning after the game.

The Lions (5-7) snapped a two-game losing streak with a 34-30 win over the Bears at Chicago on Sunday.

“I think his energy is infectious and guys feed off of it and really appreciate him as a person and just happy to help us get the win today,’’ Stafford said. “Guys went out and played fast and free, it wasn’t perfect you know, there were plays we want back but never quit, never looked at the scoreboard, just kept playing, let it figure itself out and it did.’’

“I just told them to continue to keep playing, don’t measure the game, play until there’s no time left on the clock and to continue to play with joy and enthusiasm we want them to play with and we’ll see what happens at the end,’’ Bevell said. “I think they did exactly that and good things happened.’’

It was the sixth straight loss for the Bears (5-7) who took the lead with their first possession and held on until late in the fourth quarter.

Turns out the Lions defense had a few huge plays left and Stafford did too.

1. Romeo Okwara, likely the Lions’ best defensive player this season, came up huge with a strip sack of Mitchell Trubisky with 1:37 left. He stripped the ball and John Pensini recovered it at the Bears’ 7-yard line. Two plays later Adrian Peterson ran over four Bears on his way to the end zone for what turned out to be the game-winning touchdown. Okwara’s play was obviously key. “To get that big play right there in that moment, it changed the whole momentum of the game. It was a cool play. … Just so happy for him, the defense and how they responded in the second half,’’ Bevell said.

2.  The offense appeared to open up a bit under Bevell who still made the play calls as he had as offensive coordinator. Even after Stafford missed on two deep balls, he went back deep to Quinten Cephus for a 49-yard touchdown catch in the second quarter. “The game plan was kind of do what we normally do but let Matthew kind of take the game over a little bit,’’ Bevell told WJR. “Receivers, we felt good about that, mixing in the run game. The offensive line protecting him. Matt Nelson has to go in and play right tackle, a converted defensive lineman to go out there and play tackle and block Khalil Mack play in and play out.’’ Stafford finished completing 27 of 42 attempts for 402 yards, 3 touchdowns, 1 interception and a 109.4 rating.

3. Stafford is no stranger to fourth-quarter magic. With 4:33 left, he drove the offense 96 yards down the field in 2:15, ending with a touchdown throw to Marvin Jones Jr. that put the Lions within 3 points of the Bears. Stafford now has 31 fourth-quarter comebacks, the most in the NFL since 2009. He tied with John Elway for the seventh-most in history. His 38 game-winning drives are the second-most in the NFL since 2009 and tie quarterbacks Matt Ryan and Johnny Unitas for the eighth-most in history. He did have one big hiccup. On the Lions’ first possession in the fourth, Stafford threw a side-arm pass and it was intercepted by a Bears’ defensive linemen. They were down 30-20, but obviously the game was not over. And Stafford said he kept his confidence because he felt he’d been in a good rhythm all game.

4. The Lions defense struggled in the first half, giving the Bears a 23-13 lead at the half. The Bears were held scoreless in the third. Chicago did run the ball practically at will finishing with 140 rushing yards but only 34 of those yards came in the second half. Before Sunday, the Bears had two rushing touchdowns in their first 11 games. They had three against the Lions

5. Bevell is a breath of fresh air. The emotion on the sideline was evident throughout the game, even though the Lions were losing for the first 58-plus minutes. In some of the most recent efforts, the sideline was dead. The game at Carolina stands out — the Lions were a team without a pulse. Bevell has injected much needed energy late in the season. So far it’s a winning formula