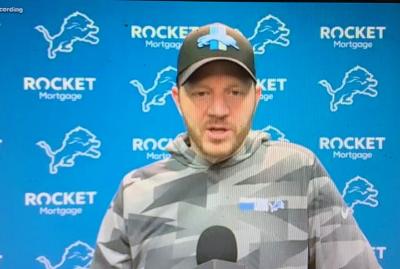 The Detroit Lions run defense will face one of its biggest tests when Detroit (5-8) plays at the TennesseeTitans (9-4) on Sunday.

Titans running back Derrick Henry leads the NFL in rushing and is a big reason the Titans have won three of their last four and sit atop the AFC South.

The Lions in their third game under interim coach Darrell Bevell look to bounce back after a home loss to the Packers.

1. Matthew Stafford didn’t practice until Friday and then it was on a limited basis. He is questionable to play due a rib injury that occurred late in Sunday’s game. He’s tough and if he can throw the ball and feel comfortable, expect to see him in the lineup. He said on Wednesday that he is not counting himself out. If he can’t go, backup Chase Daniel will be prepared after taking most of the snaps in practice throughout the week.

2. Center Frank Ragnow has been ruled out with damaged vocal cords. It’s uncertain who will start in his place. The center took a hit in the throat area which damaged his vocal chords on Sunday. The Lions are one banged up team. Wide receiver Kenny Golladay remains out while defensive lineman Da’Shawn Hand has been placed on injured reserve along with Jeff Okudah. Cornerback Daryl Roberts is out. Defensive tackle John Pensini is questionable.

3. The Lions’ defense is ranked 29th in the NFL against the run, allowing 132.8 rushing yards per game. The Titans have the second-best ground game (157.8 yards per game). Something’s got to give. Stopping Henry will be a huge test. “Critical that we start fast (on defense) in the run game, and then if we can get a ball off of (Henry), or if we can get an interception and kind of create a spark there early in the game, that will help us,’’ defensive coordinator Cory Undlin said. “You don’t want to get down early, because you’re just letting them do what they want to do, and that’s just (to) continue to run it and wear you out. Really, really good challenge.”

4. While the Titans’ offense revolves around Henry it’s not a one-man band. “Derrick Henry is the leader and that’s how they want to build the thing, and kind of the same thing that I’ve been preaching here is, when you have a solid run game in the way that they’re able to use him, it really opens up the explosions in the pass game in terms of play action and that kind of thing,’’ Bevell said. “Ryan Tannehill has done a great job for them. I know I said it, but Comeback Player of the Year and he’s still playing like that. A lot of weapons over there, and they can be explosive. Some of those explosives also come in the run game with those big, long runs by Henry as well.”

5. The Lions have about a 1-percent chance to make the playoffs and Bevell will take that. “So you’re saying there’s a chance, right? That’s why we play these games. We’re going to get them playing, and just like I said when I started this thing, this is an opportunity for all of us,’’ Bevell said. “It’s an opportunity for all of us, whether it’s going to be on this team, whether it’s another team – people are watching. They want to see how the Detroit Lions are going to be acting: if they’re just going to throw in the towel or if they’re going to keep fighting. If I have anything to say about it or these players do, we’re going to keep fighting – and 1 percent (chance to make the playoffs)? We’ll take it. I don’t even know if that’s right, but we’ll take it.”