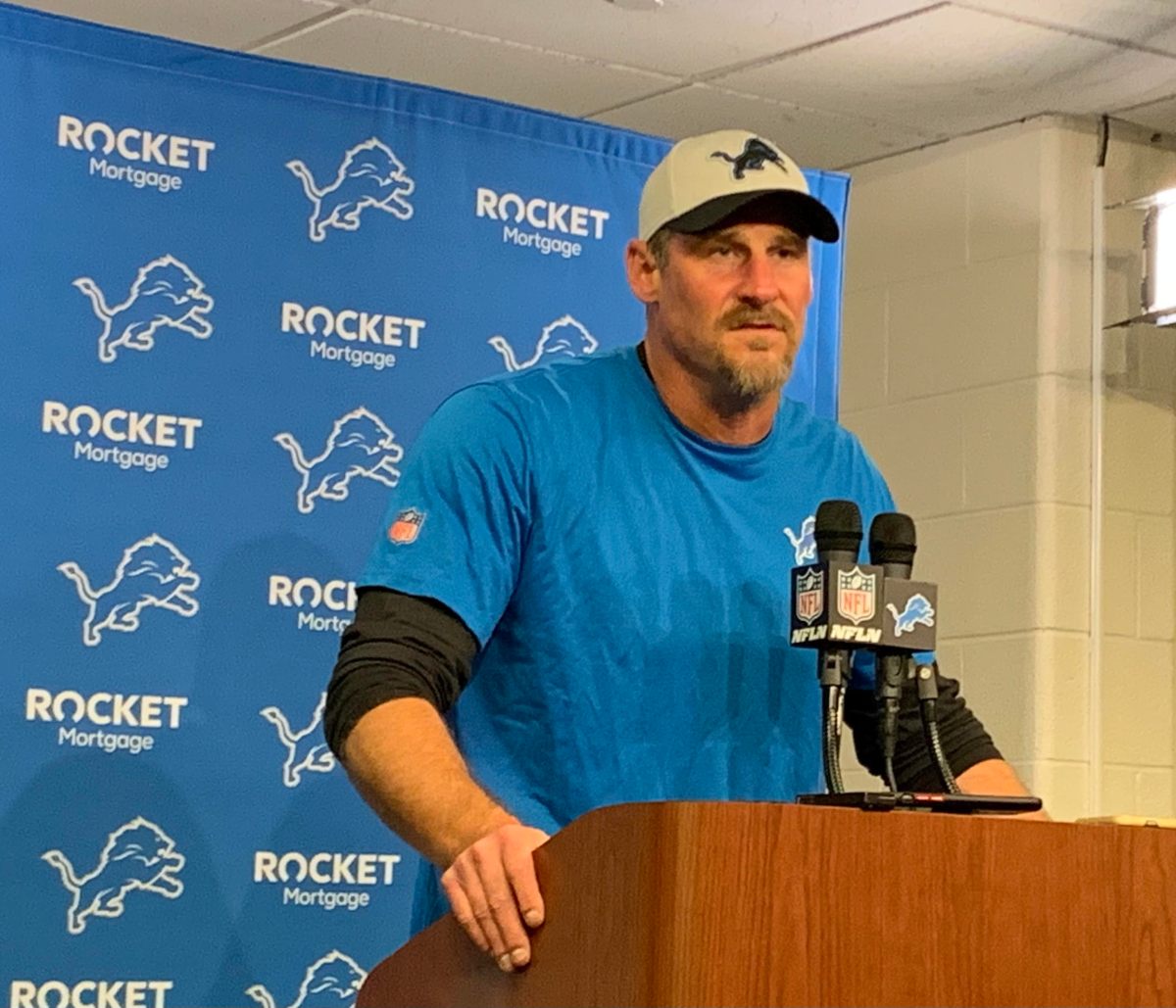 Dan Campbell had no tears to shed after the Lions’ 34-11 loss to the Bengals on Sunday at Ford Field. Instead he was angry, frustrated and everything in-between.

The targets? Everyone including himself.

His first words when he took the postgame podium: “We got whipped, that was brutal.’’

This Lions coach did not sugarcoat.

“We didn’t do anything right. (I) thought we played a little defense early in the first half other than the shot play we gave up, but we were in it. We couldn’t sustain,’’ Campbell said. “Offensively we had no rhythm, we had no tempo, we couldn’t execute on third down, missed opportunities and that’s the story of the game. That was a beatdown.’’

Five things to know about the beatdown:

2. The defense played well in the first half, just giving up 10 points. But appeared to be just bystanders during the second half. Campbell said if the offense is going to struggle the defense has to step up. “If that’s the way it’s going, the defense can’t allow the opponent to score then, so be it. That’s life. If you’re the ones who are playing best, you’ve got to hold them and keep us in the game,’’ Campbell said. “Keep it to where we can score maybe one score and find a way to win the game. It’s not good.’’ Cornerback Amani Oruwariye intercepted Joe Burrow for his third pick in the last four games. “We’ve got to find a way to get a win, play our best football we can do. I still don’t think we’ve played our best football yet,’’ Oruwariye said.

3. Running backs Jamaal Williams and D’Andre Swift had been fine in the first five losses, but couldn’t get it going against the Bengals defense even in the first half when they were only down 10-0 at the half. It’s not all on them, the makeshift offensive line (due to injuries) has to do its part too. Swift had 13 carries for 24 yards and a touchdown, along with 5 catches for 43 yards.

4. Penalties were a killer — 9 for 77 yards. The offense opened the game with back-to-back penalties — illegal formation and false start — on their first drive. This is one area that is definitely fixable but they’ve got to focus on it

5. Coaching is indeed at least in part to blame for the 0-6 record. “The focus wasn’t there. I told the team this I’m going to look at everything, that’s my job. But when you get whipped like that, that’s on me there is no way around that,’’ Campbell said. “Of course we’ll look at everything that’s a reflection on me. You don’t play like that. We don’t have a team – that team isn’t 30-something points better than us, there’s no way,’’ Campbell said. “We shot ourselves in the foot, we could not execute. We had some plays that were there to make, we didn’t make them. It’s brutal, it’s on me.’’

UP NEXT: Lions (0-6) at Los Angeles Rams (5-1). It will be a reunion with Matthew Stafford who will likely be the one walking away with a smile. The Rams defeated the Giants, 38-11, on Sunday.

THIS AND THAT: Fumbles were an issue last week, against the Bengals the Lions did not fumble. … Jack Fox punted six times and averaged 55.5 yards per punt with a long of 64 yards. … Tight end T.J. Hockenson caught 8 passes for 74 yards. … In the first half the Lions had 51 yards of offense and just four first downs. They finished with 15 first downs but only because of garbage time in the fourth when there was no way they could come back. … The Lions were 5-14 (35.7%) on third downs and 1-2 on fourth-down attempts. … The Bengals finished with 398 net yards while Detroit had 228. … Cincinnati won the time-of-possession battle with 35:52 to 24:08. … Julian Owkara had his first NFL sack and Austin Bryant also sacked Joe Burrow. … Derrick Barnes led all defensmen with 8 tackles.