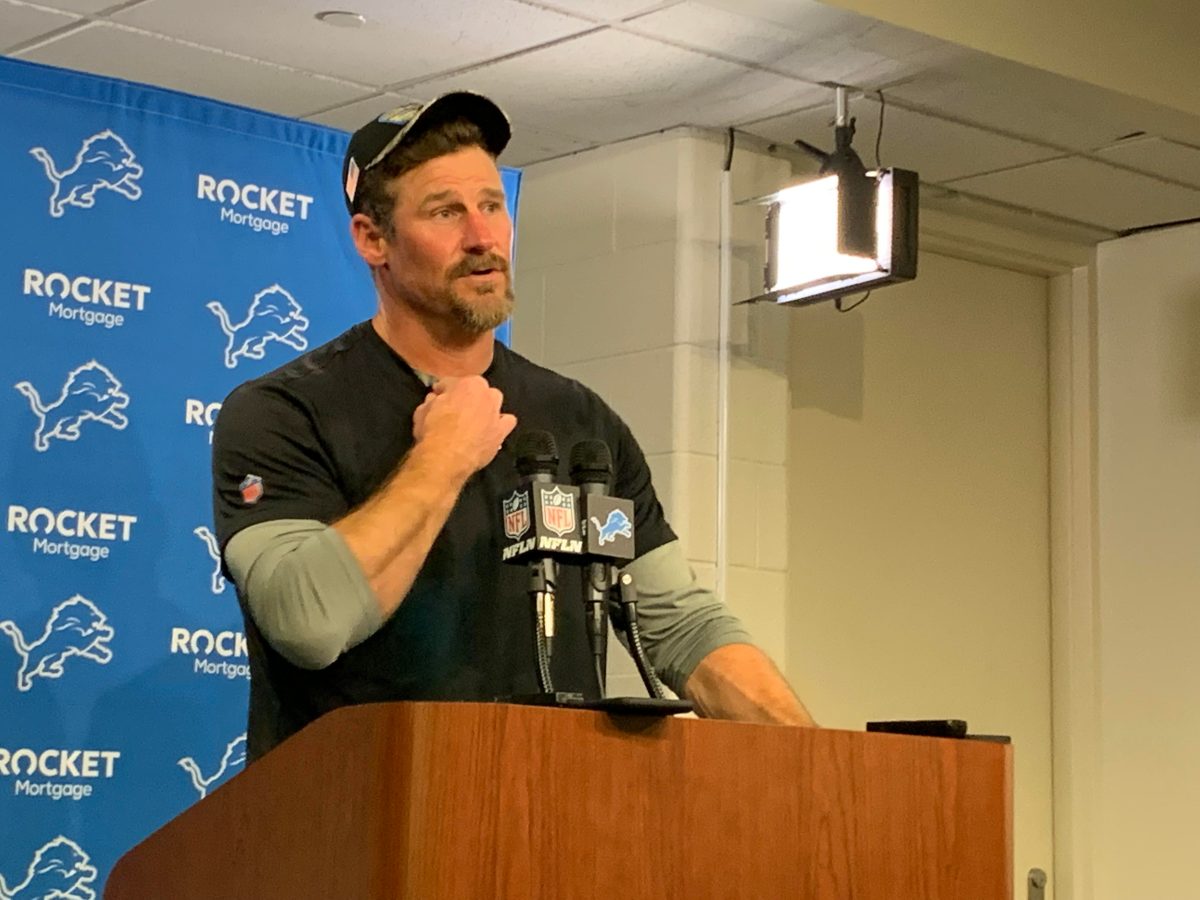 For the second straight home game, the Lions embarrassed themselves with a one-sided loss. On Sunday they fell 44-6 to the Eagles (3-5) who had lost five of their previous six games.

This should have been a game the Lions were in, but they most certainly were not. It wasn’t bad calls by the officials, it was weak play on all three units along with questionable coaching at times.

The Lions (0-8) may be the best team in the NFL at shooting themselves in the foot. A dubious distinction to be sure.

“We got pushed around bad. … I felt like we got out-coached today and out-played across the board and that starts with me. You don’t play that bad with a number of guys and areas and turn the ball over and penalties and low-energy,’’ Campbell said. “You don’t do that unless that comes from the top and that’s on me. I did not set the tone and the tempo properly obviously because that was bad. We didn’t even give ourselves a chance.’’

With next Sunday as the bye, Campbell, his staff and every player have time to reflect on the 0-8 start.

Five things to know about the loss

1. So far this season, maybe with the exception of the Bengals game two weeks ago, the Lions have shown a fighting spirit. Even at the Rams a week ago, they came out on fire scoring 16 first-half points before being slowed down in the second half. The want-to was not really apparent on Sunday. “I really felt like we were flat. I’m not worried about my message … well I guess maybe I should be worried about my message right, when you play like this that’s why you’re asking,’’ Campbell said.  “I’m not worried about losing this team, I am worried that I didn’t deliver the right message to get them ready to go. That’s what concerns me about what I do.’’

2. Quarterback Jared Goff had a brutal day. He was sacked five times (four in the first half), and completed 25 of 34 passes for 222 yards. On a fourth-and-11 in the third quarter it looked like he threw the ball away although Goff said it was a misfire, a physical error, he was not trying to throw it away. Campbell still has Goff’s back. “Aside from the fact on the fourth-down he threw it into the stands which yes, that’s not a good decision, I don’t know what he’s supposed to do as far as the way that game went,’’ Campbell said. “I don’t look at him and go, ‘He’s the problem.’ That’s not how I see it. I do see this —  offensively we were very anemic. If you’re going to ask me where are you going to look this week, I’m going to look at it three times before I look at anything else.

3. Running back D’Andre Swift was not effective at all against the Eagles defense. Jamaal Williams was out with an injury so they needed Swift to have a big day. The Lions have to be able to run and it was not there at all. Swift carried a dozen times for 27yards, a 2.3 per carry average and caught five passes for 24 yards. “We know Swift can help us, we couldn’t get him going. We tried, we just couldn’t get him going the way we wanted to get him going,’’ Campbell said.

4. The defense knew exactly what to expect of mobile Eagles quarterback Jalen Hurts – they couldn’t let him out of the pocket and yet they did. He had more rushing yards (71) than all the Lions combined. This was not a surprise. He was the Eagles leading rusher going into the game. Lions safety Tracy Walker put the lack of execution on himself and his teammates. The coaches, they can make the game plan, they can draw up as many plays as they want but they can’t throw that playbook out there to make those plays,’’ Walker said. “At the end of the day us as players we’ve got to go out there and execute the plays that are called regardless of what the scheme may be we have to go out and do our jobs.’’

5. Give Campbell credit that he will always take the blame for a loss. That’s swell but he has to find ways to make this team more competitive. Everyone knew that wins this season would be extremely tough to get but this has been worse than billed. Campbell will spend the bye week looking at every aspect of the team in all three phases. Goff says the team has not given up. “I think that’s kind of been the theme the whole year. As bad as it’s been, the effort is there . We have young kids who are fighting, we have veteran guys who are fighting and we love each other,’’ Goff said.