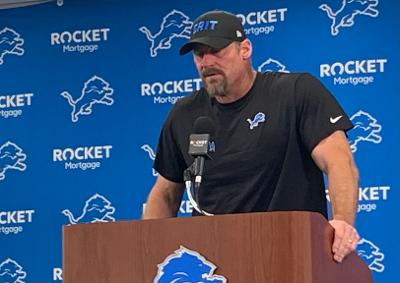 With the deadline for making the roster cuts to 53, just over 24 hours away, Detroit Lions coach Dan Campbell said that no moves had been made. Campbell addressed the media, breaking away from a meeting with GM Brad Holmes, early Monday afternoon.

Campbell said there could be tougher decisions than last year when he and Holmes were just getting started.

“These are difficult. Ultimately we’re probably going to have to let go of some players who were here all last year, that we depended on, did everything we asked them to do and produced for us last year. That’s a sign of progress,’’ Campbell said.

After the preseason loss at Pittsburgh on Sunday, he said he had gotten clarity on the backup quarterback situation. That could mean two things – he’s good with either David Blough or Tim Boyle as Jared Goff’s backup. Or, he doesn’t feel either one can handle the job if Goff goes down.

“Whoever is out there you’ve got to know it’s a clear upgrade from what’s already in this building because if it’s not, why would you do it,’’ Campbell said.

Holmes and Campbell are watching all team cuts for anyone they feel can improve the roster.

“There are a number of guys we are going to have to move on from that we would love to have back in this building. They didn’t quite make the 53, but we’ve had a lot of time invested with them, we know what they’re about and we understand the growth. There is a comfort level with some of those guys you bring them back if something does happen you feel like they’re plug and play and there’s comfort in that,’’ Campbell said.

“You always want that but you also want to know are there some players who are out there, who aren’t in this building right now that you believe can come in and have a tremendous amount of upside and maybe can develop into true starters at some point. It’s a balancing act that you have to have,’’ he added.

The deadline is looming. Stay tuned.