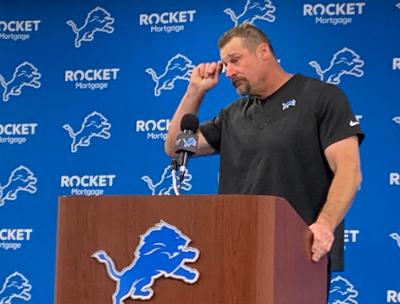 After hitting rock bottom two weeks ago, coach Dan Campbell said he sees the Lions climbing back out of the depths even after the 24-6 loss at Dallas.

“I’m encouraged by our defense, it was encouraging. It’s hard to lose but when you watch the way they played yesterday and I told them, I said this last night, they played exactly the way we practiced,’’ Campbell said on Monday. “It was high energy, they were intense, they were urgent, we got a ball out – we got a turnover. You could feel the pressure on third down. We hit the quarterback early. We challenged on the perimeter, our secondary was coming down hitting and tackling.’’

The Lions fell to 1-5 after the loss. The defense has been at the bottom of the NFL standings in points per game and yards allowed. For the talent on that side of the ball, more was expected.

After rock bottom — the 29-0 loss to the Patriots — Campbell, his staff and players took the bye week to examine what was going on, on both sides of the ball but defense was more of an issue. Even though the Lions offense was shut out in that Patriots game, it was one of the NFL’s most high-scoring offenses up to that point.

Defensively, coordinator Aaron Glenn and Campbell made changes including benching veteran defensive lineman Michael Brockers. Campbell called him a “pro’s pro” and said he is willing to help the younger guys even if he’s not playing.

Campbell said the loss was Jeff Okudah’s best game since he’s been in Detroit and it’s exactly how he practiced last week. He also noted that Julian Okwara had his best game.

“That’s encouraging because when your defense begins to start finding their way there a little bit, you’ve got a chance. It’s a credit to A.G. We changed a few things, kind of went back to what we were doing last year, just the way we played those big boys up front. Getting Hutch (Aidan Hutchinson) up in the 2-point, having (Josh) Paschal back and (John) Cominsky. I thought they all showed up.’’

He also noted the physical play of cornerback Amani (Oruwariye) who had been benched for the Patriots’ game and finished with 15 tackles on Sunday. Also, Campbell was pleased with rookie Kerby Joseph who forced a fumble in the red zone.

“One of the reasons we liked (Joseph), he’s a ball guy. He’s got instincts back there, he’s got range and he’s this close. Every week he’s gotten better and better and better,’’ Campbell said of the third-round pick. “That was huge, we preached takeaways last week and he came up with a big one in the red zone. So he’s trending the right way.’’

The scheme has also changed.

“We’re going to set edges and funnel everything inside to our backers, our two big guys, now anything pops through there, if it gets out to perimeter between edge setter and your linebacker now you put them in a phone booth for your corner, you don’t have to tackle on the perimeter where you have all that space,’’ Campbell said. “We just felt like it was going to help everybody and it did.”

Four rookies started on defense — Hutchinson, Kerby, Malcolm Rodriguez and Josh Paschal (in his first NFL game). Paschal, a second-round pick, also was called out by Campbell for having an encouraging debut.

Now about the offense, which was missing running back D’Andre Swift (ankle/shoulder) and wide receiver D.J. Chark (ankle). Plus, wide receiver Amon-Ra St. Brown was taken out of the game early for a concussion test and not allowed back in under new NFL rules. He was cleared of a concussion and Campbell expects him back for Sunday’s game against the Dolphins.

The defense showed up with a few changes and the addition of Paschal and John Cominsky — and the return of Oruwariye — on Sunday.

Could the offense improve with Swift and St. Brown in the lineup?

“I would say this, it wouldn’t hurt,’’ Campbell said.