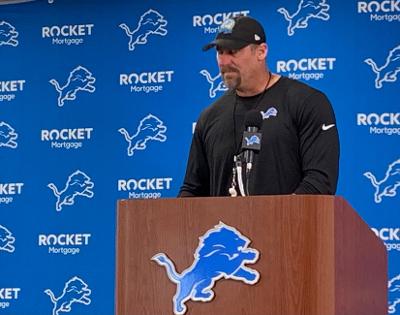 When the NFL schedule makers scheduled the Green Bay Packers at the Lions this week, it could have been a key NFC North matchup. Well after seven games, not so much.

The Packers (3-5) are tied with the Bears in the division while the Lions (1-6) are once again hanging out in the basement.

Detroit traded away tight end T.J. Hockenson this week but they insist winning each week is still the goal. Coach Dan Campbell, whose record is 4-19-1, insists the team is close. And, by the way, he doesn’t believe this team is cursed.

“No, I don’t man. I do not, I can’t go there. I’m not going to allow myself to go there because I just feel like for me as a coach, or for us as players, that’s an excuse,’’ Campbell said. “And I think you create your own vibe, your own mojo, you create your own energy. And I think the more you buy into that, believe that, that’s what you become, so no, I’m not buying that.”

Five things to watch as the Lions host the Packers:

1.Can the defense regroup after a coaching shakeup cost defensive backs coach Aubrey Pleasant his job. The defense is dead last in the NFL ratings. Miami’s TuaTagovailoa had his way with the Lions passing for 382 yards. Not one of his passing attempts was thrown into tight coverage where there was a defender within one yard or less of the receiver at the time of completion on incompletion, according to Zebra Technology. That is one atrocious stat. Defensive coordinator Aaron Glenn said the focus is to win now. “I think every decision that’s made is made to win. Period. Some guys might not understand that, but it’s made to win,’’ Glenn said. “If it’s in the future, but every decision’s meant to be made to win right now. I know that’s how I look at it.’’

2. Aaron Rodgers has been inconsistent but he is completing 66.4 percent of his passes and has thrown just four interceptions against 13 touchdowns. He is always dangerous.  “Well, they still have that guy (Rodgers), so as long as you have that guy you have a chance,’’ Glenn said.

3. Speaking of quarterbacks, Jared Goff threw three touchdown passes in the first half against the Dolphins, but couldn’t get the offense on track in the second half due to penalties and drops. He never found a rhythm with just three second-half possessions and he said the issues were mostly self-inflicted. “That’s kind of the frustrating part. I wish I could say, ‘Yeah, the defense came out and did something we weren’t expecting and it kind of caught us off guard.’ And that hasn’t been the case,’’ Goff said. “It’s been self-inflicted, and for a variety of reasons, but this past week unfortunately, it was some penalties. I think though, with that being said, how can we – like every team is going to have a bad drive here or there. They’re going to have penalties, they’re going to have turnovers. How do we put it away and move on and get back to what we do quicker the next drive, respond? And I think that’s kind of where the emphasis is put, less on, ‘Hey guys, let’s avoid mistakes,’ more on, ‘Hey, let’s respond after them.’”

4. The offense will regroup in a fashion to make up for the absence of Hockenson who had 26 catches for 395 yards and three touchdowns. Look for tight ends Brock Wright and James Mitchell to be more involved and the wide receivers too. Campbell said he was honest with the team about the trade. “I told them that what I have to judge is, well, where does his production go now? And I have to feel OK with that production going to (WR Amon-Ra) St. Brown, (WR Kalif Raymond) Leaf, (WR Josh) Reynolds, (RB D’Andre) Swift, another carry for (Lions RB) Jamaal (Williams) and the other tight ends. And I feel OK with that,’’ Campbell said.

5. After trading the top tight end and firing an assistant coach, the Lions have to remain focused. Campbell said he was straight with them about Hockenson, calling it a business decision. It was a tough call to fire Pleasant but obviously he thought it was necessary. The organization hasn’t given up for the season even though it may look like it from afar. With straight talk and solid leadership within the team, they have to keep playing like it matters. It will be obvious if they don’t.