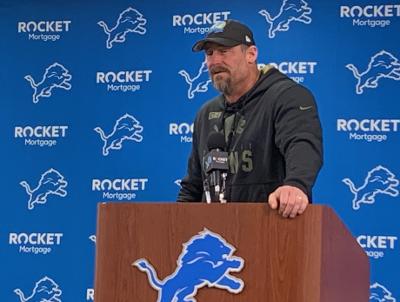 ALLEN PARK — Lions first-round pick, wide receiver Jameson Williams, returned to the field on Monday. Coming off injured reserve, the Lions have up to three weeks to activate him for a game.

Jameson, who played at Alabama, tore his ACL in January’s national championship game and hasn’t been on the field since. It seems highly unlikely he will play on Thursday because of the shortened week of preparation for Thursday’s game against the Bills.

Coach Dan Campbell does not know at what point Williams will be ready to be active for a game.

Of course there will be a learning curve. Even though Williams has not been able to practice since the draft, he has been in meetings and he’s gotten to know his teammates.

“There’s some good rapport. When that time comes he’ll earn respect from his teammates like the rest of his guys have,’’ Campbell said.

Again, no estimate from the coach on when he’ll make his debut.

“The rehab that he’s done — even though this is technically not practice if you will, it’s walk-through mode — the things he’ll do starting today out there live are much more football-oriented,’’ Campbell said on Monday. “We’ll see where he can go and see how fast he can get there.’’

Quarterback Jared Goff said it was good to see him out at the walk-through. “He’s got so much speed and ability,’’ Goff said.

Campbell said he learned a lot from playing on Thanksgiving last year and it should help with the preparation this week.

“Last year it was literally, you’ve heard the term, it was drinking out of a firehose. I’ve done it before as a player and a coach, but not as a head coach. Man, it gets on you in a hurry,’’ Campbell said. “I do feel like for me personally, I’m much more prepared for getting us prepared for this week. …There’s no easy way to do it. However you cut it, it’s hard on the players and the coaches.’’

The assistant coaches had prepared statistics and notes earlier. The coaching staff met last night when they got back from the win at the N.Y. Giants.

Rookie Aidan Hutchinson is the NFL’s first defensive lineman to produce a season with at least 5 sacks, 2 interceptions and a fumble recovery since Jared Allen in 2010. And Hutchinson becomes the third rookie defensive lineman in NFL history joining Leslie O’Neal (1986) and John Zook (1969). He’s making a case for NFL defensive rookie of the year.

Lions had to estimate a practice report since they were just planning a walk-through in preparation for Thursday’s game. Those who wouldn’t have practiced include OL Evan Brown (ankle), DL Charles Harris (groin), G Jonah Jackson (illness), CB Jeff Okudah (concussion), Josh Paschal (knee), C Frank Ragnow (foot), and  WR Josh Reynolds (back). WR D.J Chark (ankle) would have been limited. Campbell said that it doesn’t appear there is any way that OKudah will be cleared to play by Thursday.