The veteran missed 2016 with a torn ACL 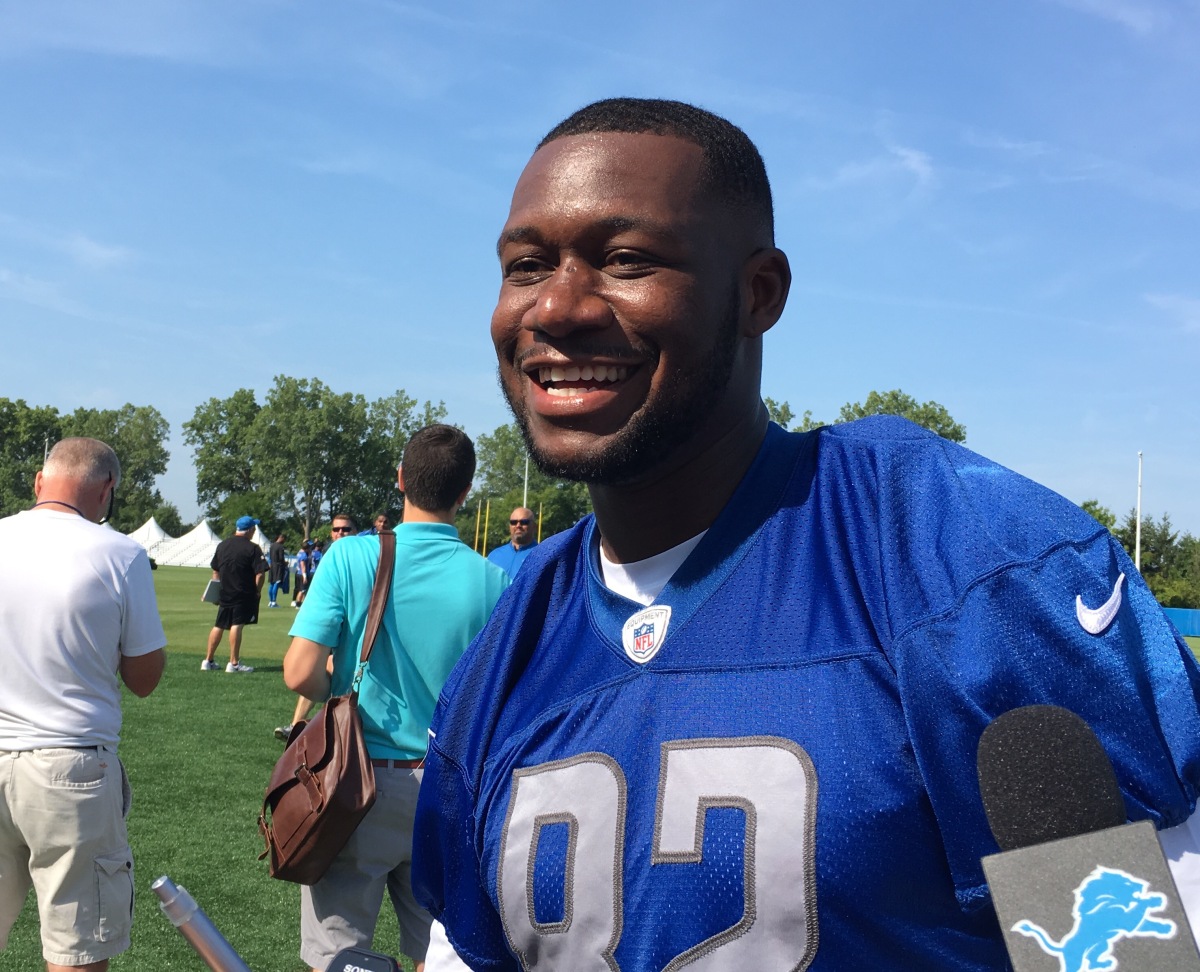 ALLEN PARK >> When he’s not an NFL tight end, Tim Wright is busy at his barber shop — The Wright Cut — in Piscataway, N.J.

Luckily, he has a team in place to take over the hair-cutting duties because he signed with the Lions on Wednesday and was back on the practice field.

It’s unclear what his chances are of making the 53-man roster since he is one of seven tight ends. He certainly has a good shot and, if Wednesday was an indication, he’ll get plenty of first-team reps. (Eric Ebron has not been practicing due to an undisclosed injury.)

Much of Wright’s success will depend on how well he looks in camp and the preseason games.

“He has some familiarity with the system, so we’ll try to bring him along,’’ coach Jim Caldwell said.

Here are five things to know about Wright:

1. He knows the offense and said not much has changed since last year. That could be one reason he was taking reps with the first team in practice. “I’m a true veteran and I’m a pro. I’ve been around a great organization and this is a great organization,’’ Wright said. “So I know what to expect and where to pick up where I left off.’’

2. While he had feelers from other NFL teams, he’s happy to be back in Detroit. “My heart is here. All the stuff in my drawers is Lions stuff, all the other teams I’ve been on, that stuff is in storage and I’m ready to be a Lion again,’’ said Wright who is wearing No. 82.

3. He was not just cutting hair this summer. His NFL dreams were not dead. “I was working out man, posting stuff on Instagram so people could see it,’’ Wright said. “Fortunately the coaches had checked in, they saw how I look and brought me in. I dominated the workout and they saw me.’’ He said the Lions had been in touch with his agent over the past few months. “I’m sure they had me on their radar, I felt it, so I was preparing myself. When the time struck, the opportunity came, I was ready for it. I was focusing on getting better every day.’’

4. In 2015 with the Lions, Wright had nine catches for 77 yards. Two of those nine receptions were touchdowns. In 2014 with the New England Patriots he had six touchdowns in 16 games  and in 2013 with Tampa Bay he scored five times. “The touchdowns and catches are good for the books,’’ Wright said. “It’s a new year, I’ve got that under my belt. I know how I did it, my teammates know how I did it, hopefully (Matthew) Stafford knows how I did it. I’m trying to go out there and collect a few more.’’

5. The Lions were to leave for Indianapolis on Wednesday afternoon. They’ll have joint practices with the Colts on Thursday and Friday leading up to their first preseason game on Sunday at Indianapolis. “I’m excited. The last two times I was traded, the next day I was into a game either starting or playing full speed. That’s what it is tomorrow at Indy. I’m ready to go rip it up,’’ Wright said. 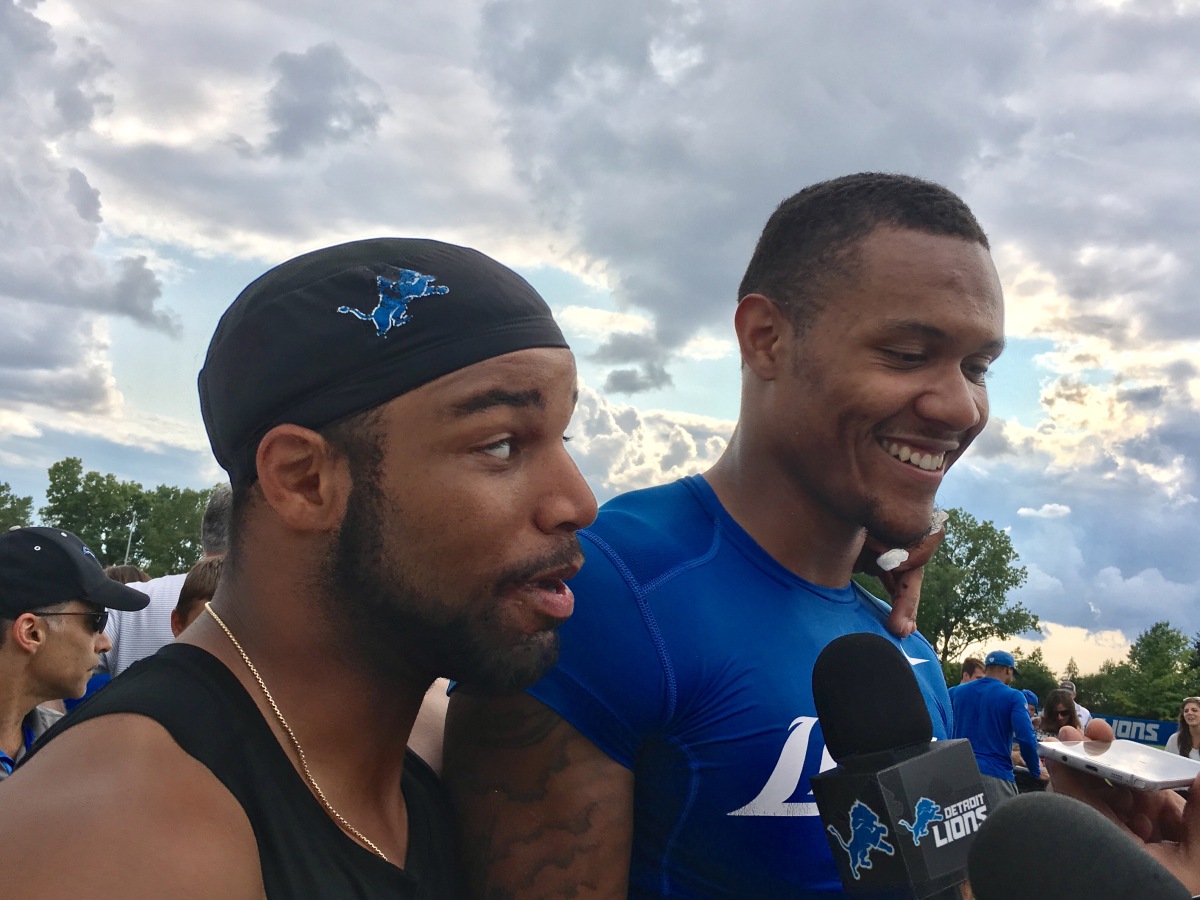 ALLEN PARK >> Sunday was another typical day at Detroit Lions training camp with a few twists.

Here are five notes of interest:

1. Running back Ameer Abdullah did not work for the first time since training camp started a week ago. Abdullah is coming off ankle surgery which forced him to miss the final 14 games in 2016.

“I guess it’s a vet day, only my third year I get a vet day,’’ Abdullah said.

In other words, the coaches gave him a day off, being careful to not overwork him.

He was good with it.

“I can get after it every single day. I feel good. I was telling coach I’ve turned the corner, I don’t really think about it any more. I’m out there competing at a high level, back to my old self and I’m happy with the progression I’ve made,’’ Abdullah said.

2. Rookie wide receiver Kenny Golladay continues to flash. On Sunday he made some nice catches in red zone drills.

A media scrum with Golladay was briefly interrupted by veteran Golden Tate. (See photo above.) He had a few words to say: “Timeout — this boy can ball, you all have been seeing it, this guy can ball,’’ Tate said.

Tell us something we don’t know.

Golladay also got praise from Chad “Ochocinco” Johnson who visited camp on Friday.

“He said keep on working. He said you have a bright future — you’re big, physical and you can run. I just take advice from a guy like that. Fuel to the fire —  it just stokes me to come out and work,’’ Golladay, the third-round draft, pick said.

3. Cornerback Teez Tabor has had an up-and-down camp which is not unusual for a rookie.

When he was drafted, he said he was going to attach himself to Darius Slay to learn the position. He’s been true to his word.

“He’s learning from me, I’m still learning myself more, just trying to get him better,’’ Slay said.

He said Tabor is improving when it comes to asking the right questions.

“To be honest he’s probably one of the smartest ones in the (cornerback) room. He really understands the game. I think that helped him a lot in college because he understood the game real good. I think he’s going pretty good,’’ Slay said.

4. Punter Sam Martin is on the active/non-football injury list with an ankle issue. Unlike most of the other injured players, he has not been on the field at practice.

He is around, though.

Kicker Matt Prater said it’s weird not to have him on the field.

“I’m with him all day anyway. He’s just not at practice but he’s here everyday working getting healthier, better stronger,’’ Prater said. “We’re excited for an opportunity for Kasey (Redfern) to showcase what he can do in camp. We all know what Sam is capable of, he’s obviously one of the best to ever do it but Kasey has done a nice job filling in.’’

5.  Theo Riddick continues to wear the red cautionary jersey but it didn’t stop him on Sunday from juking and making plays like we’ve seen before.

“We just want to give him enough to make certain he was ready. We started out where he wasn’t do any catching just running, then he started catching a little more during certain phases. He’s doing more catching and a little more activity. … He’s been released (by doctors) to play but we’ll take our time,’’ coach Jim Caldwell said. Riddick is coming off surgery on both wrists.

Abdullah calls Riddick one of the most underrated player in the NFL.

“He’s one of the most difficult guys to cover in the National Football League. Now the minute you say that they’ll double-team him, triple-team him, take him away from you but we have other guys to get the ball to. He is a real threat out of the backfield in a number of different ways,’’ Caldwell said.

Running back only played 10 games in 2016 due to injury 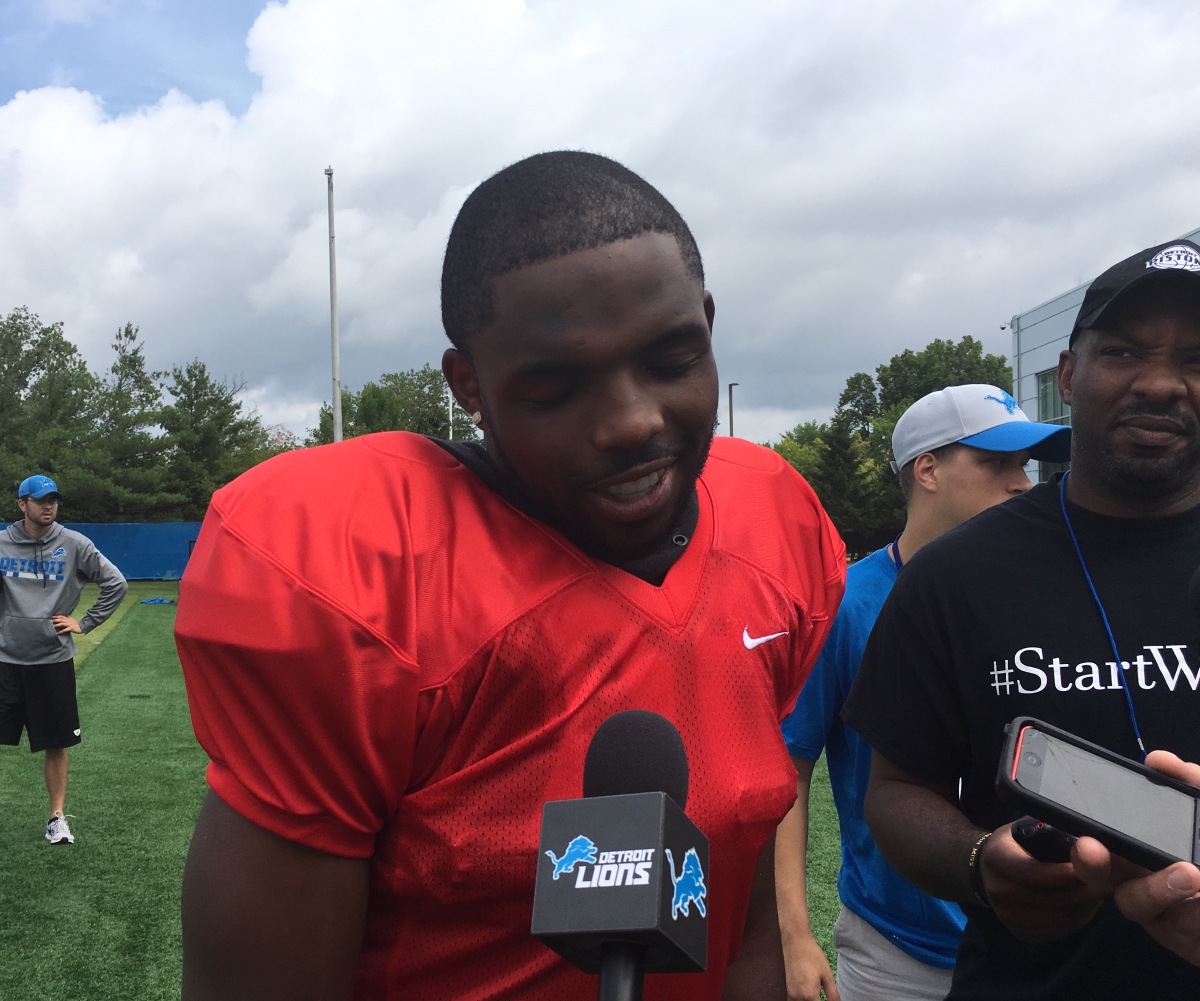 ALLEN PARK — Theo Riddick had an uncharacteristic drop in Friday’s training camp and he was not happy about it.

Riddick missed the final three games last season with injuries that led to surgery on both of his wrists.

After he missed all of the spring practices, he’s back in action wearing a red cautionary jersey. He’s not fair game — he is not supposed to be hit.

Here are five things to know about Riddick:

— Coach Jim Caldwell is pleased with his progress. “He’s coming along well, just in terms of his cardiovascular shape. He’s in good shape. He’s moving around out there,’’ Caldwell said on Friday. “The only thing we’re not allowing him to do is have contact, even though he went to the ground one time out there. But other than that, I think he’s making good progress.”

— When asked about the statement that he’s one of the most underrated players in the NFL, Riddick has one three-word response: “Let’s play ball.”

— He’s thrilled to be back on the practice field after watching all spring while still wearing a brace on his right wrist. “It’s what you love to do, go out there and get the calls going in fast motions or slow. And just being out there working on the little things, paying attention to detail,’’ Riddick said.

— Ameer Abdullah and Riddick have not been on the field together since the second game of the 2016 season. Abdullah missed the final 14 games with a foot injury. “As long a we stay healthy we should be in good shape. We’re two talented backs and want to get the ball in our hands, we just want to do something with it,’’ Riddick said. The Lions’ running game was ranked 30th in the NFL in 2016 averaging just 81.9 yards per game.

— Riddick and Abdullah help each other off the field. “That’s my guy, everybody’s close in the room. Definitely me and Ameer, we definitely communicate. When he’s in  I can be an extra set of eyes,’’ Riddick said. “We’re always constantly learning and critiquing ourselves. With that we’re always trying to push each other even if we can get better in the smallest area.’’