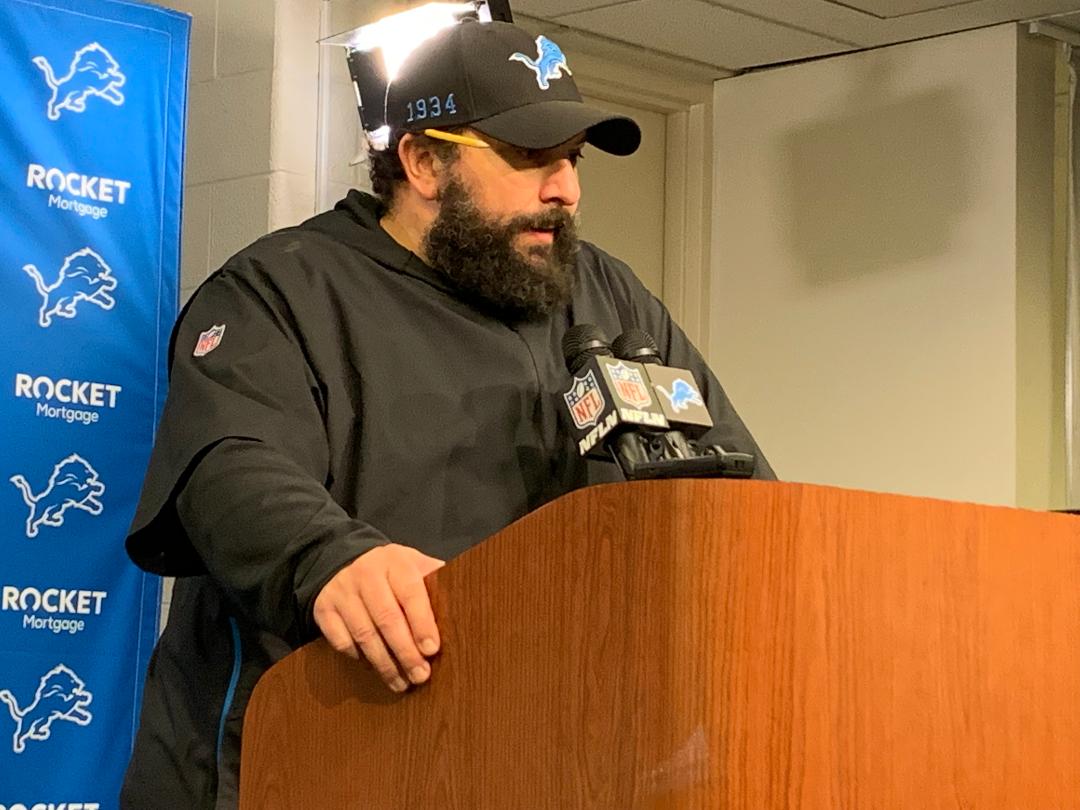 DETROIT — Matt Patricia’s survival as coach of the Detroit Lions may be in more peril after Sunday. The Lions’ defense made quarterback Jameis Winston look like a Hall of Famer in waiting, in Tampa Bay’s 38-17 win at Ford Field.

It was the seventh straight loss for the Lions who drop to 3-10-1.

“I think the one thing that’s consistent, the team fights, they work hard, really regardless of who’s out there,’’ coach Matt Patricia said.

Is that enough? Apparently not, but wide receiver Danny Amendola agrees with Patricia.

“We got a lot of guys who are beat up, banged up and injured and we got guys rolling in, next man up, trying to step up, trying to make plays. Everyone here is trying their best, everybody is fighting,’’ Amendola said. “I love how everyone comes to work, I love how we fight on game day and whatever the situation may be, we are going to get out there and fight for our brothers. So that is what I love about this team.”

He said they have to find an edge.

“We have to believe, we have to roll into each game thinking we are going to win,’’ Amendola said.

They have two games left this season to figure it out.

1. Winston had a monstrous day thanks to Detroit’s defense which was beat again and again and again on deep crossing patterns. Winston was 28 of 42 for 458 yards, four touchdowns and one interception. Darius Slay dropped what could’ve been an interception. Detroit’s secondary just plain got beat time after time. On Breshad Perriman’s first touchdown (for 34 yards) cornerback Rashaan Melvin was about 5 yards behind the play. Trey Flowers muffed on a sack. Overall the Lions’ defense didn’t look prepared. One highlight was Jahlani Tavai’s first interception, but the Lions offense could not score afterward.

2. The Lions fought back in the second half. Down by just a touchdown (24-17) with five minutes left, Detroit’s offense had the ball but quarterback David Blough’s pass intended for Danny Amendola was intercepted by Sean Murphy-Binding and returned 70 yards for a touchdown. “Can’t do it. Obviously it’s the play that will come back, we’ll look at as ultimately the dagger in the game. Danny ran a good route I left it a little behind him, the guy made a good play and went the other way with it,’’ Blough said. “You can’t do it playing quarterback in this league you have to value the football first and foremost. It’s frustrating it happened there after the guys fought so hard to battle back. I’ll take it it’s on me, it’s frustrating.’’ Blough was 24 of 43 for 260 yards, no touchdowns and two interceptions.

3. The bad start was a killer. The Lions were down by three touchdowns with 8:13 left in the second quarter. “The slow start was not really what we want to do against an explosive team like this,’’ Patricia said. “Obviously, detrimental. They can score extremely fast, they’re a very aggressive defense, they have good players on both sides of the ball you have to do a better job to start the game.’’ The defense gave up three first-half touchdowns and the offense was stuck in neutral. At the end of the first quarter the Lions’ offense had 1 net yard (the Bucs had 236). At halftime it was up to 56 yards.

4. The fourth quarter was a disaster again. This season the Lions have been outscored 122-84 in the final stanza — it’s on the offense for not getting it done and the defense for letting the opponent march down the field. Again on Sunday they were outscored 14-7 in the fourth. Patricia said it is not a result of conditioning. “I don’t think you ever want to put frustration into words because it never comes out right, so I would say for us we understand, we just look at it from the standpoint of why, what are we doing and how do we improve it,’’ Patricia said. He did not offer any more specifics.

5. Injuries have really hit the Lions hard, especially in the last few weeks. Within the last seven days they’ve put four players on injured reserve (Da’Shawn Hand, Marv Jones Jr., Jarrad Davis and Joe Dahl). Wes Hills, the starting running back on Sunday (replacing the injured Bo Scarbrough), was playing in his first NFL game. He had a slow start, but finished with two rushing touchdowns becoming just the third Lions player to rush for two touchdowns in his first career game, along with Jahvid Best (2010) and Billy Sims (1980). Ten Lions who started in Week One were not available on Sunday (that includes Quandre Diggs who was traded). The others were injured or on injured reserve. That’s a ton.

BONUS: Bucs wide receiver Breshad Perriman finished with three receiving touchdowns — he had two in the first 11 games. He’s just another opponent that the Lions’ defense made look like a Pro Bowl player. He had five catches for 113 yards. Curiously enough, Breshad’s dad, Brett, played for the Lions for six years (1991-96) and never had a three-touchdown game.