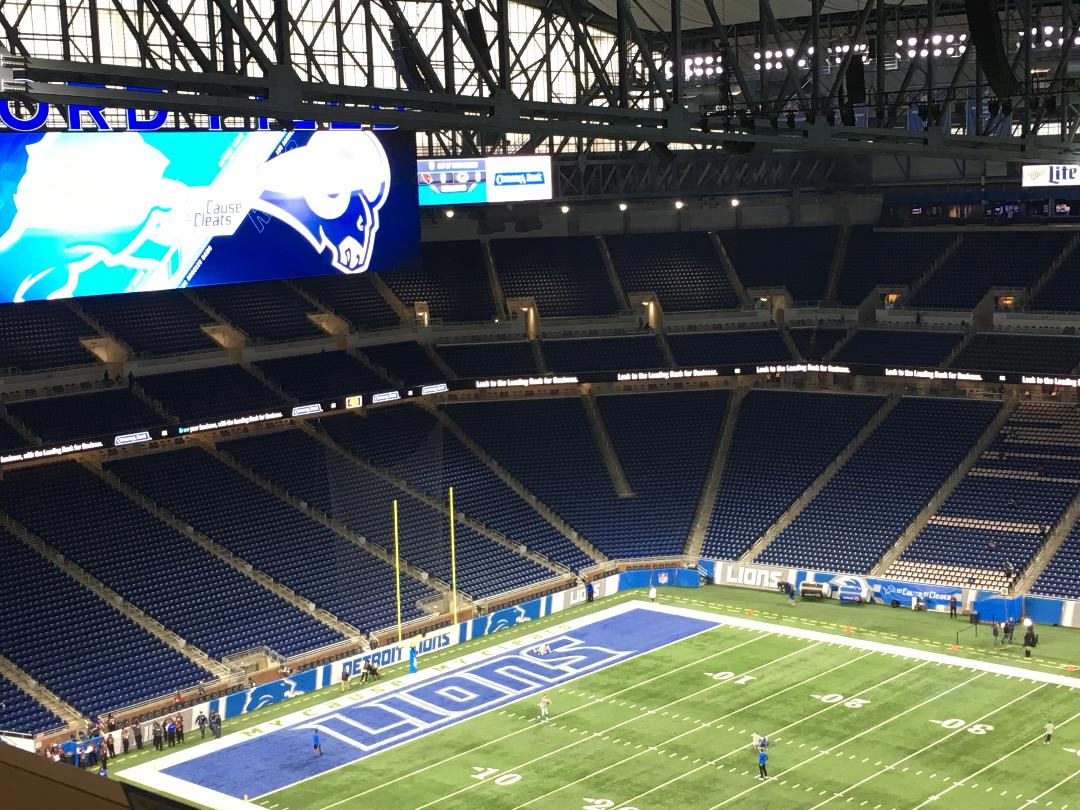 DETROIT >> The Detroit Lions (4-7) will face the Los Angeles Rams (10-1) today without top running back Kerryon Johnson who misses his second straight game with a knee injury. Expect LeGarrette Blount to pick up more carries like he did against the Bears on Thanksgiving.

Fullback Nick Bellore (ankle) and wide receiver Brandon Powell (calf) were also declared out on Friday. Tight end Michael Roberts (shoulder) was doubtful and is out.

Wide receiver Bruce Ellington (back) and linebacker Jalen Reeves-Maybin (neck) were questionable but are active.

Loss drops Lions to 4-7, with Rams coming upu next 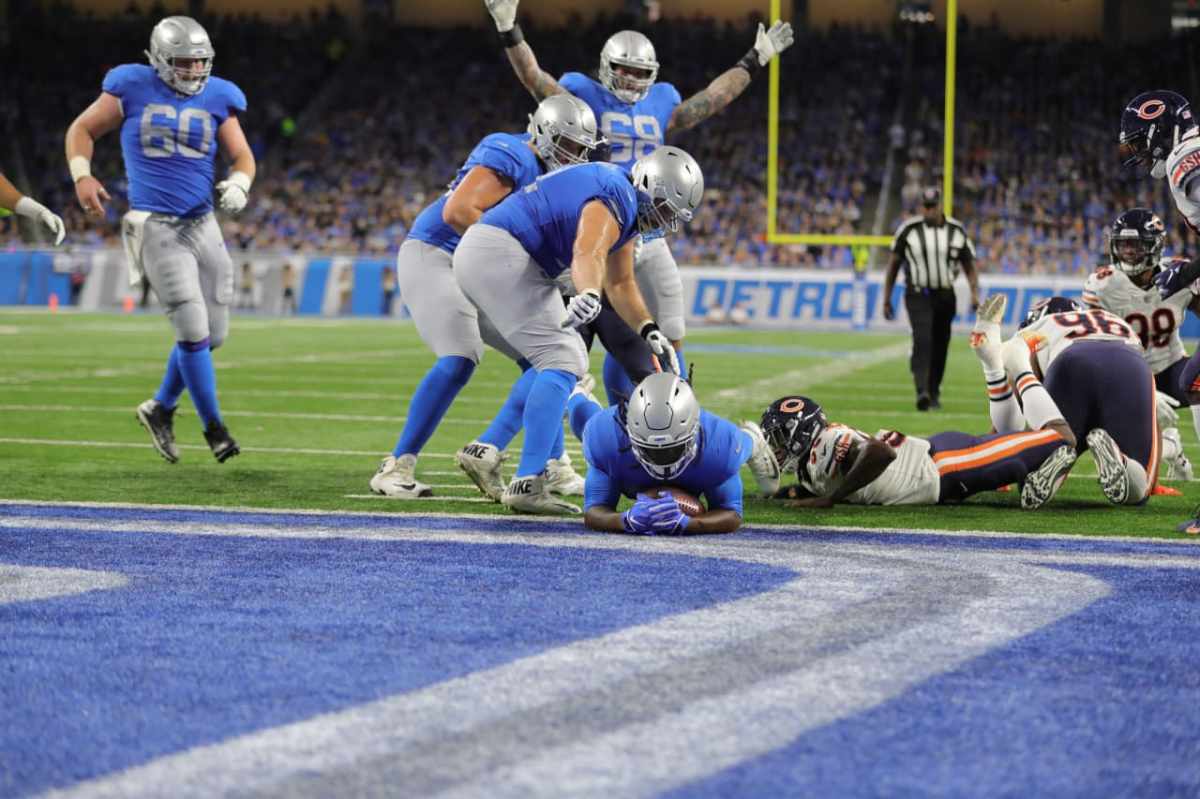 DETROIT — The Lions’ offense appeared to take a step backward in Thursday’s 23-16 loss to the Chicago Bears at Ford Field.

Yes, they were without wide receiver Marvin Jones Jr., and running back Kerryon Johnson. But Chicago was forced to lean on quarterback Chase Daniel who hadn’t started a game since 2014.

Detroit running back LeGarrette Blount had a good day (19 carries for 88 yards). He was in no mood to celebrate. He didn’t even know his touchdown earned him a $350,000 bonus for his fifth touchdown of the season.

Blount has won three Super Bowl rings playing for the Patriots and the Eagles. He knows what it takes to be a winning team.

“I’m a Detroit Lion right now so that’s all I’m focused on. I think there’s a lot of things we need to fix in order for us to be a successful team,’’ Blount said. “There’s a lot of things that we’ve got to do that we haven’t done to put ourselves in position to win games like this. When it’s close games like this we have to finish them off. We’ve got to close them out and we didn’t. That’s our fault.’’

Quarterback Matthew Stafford had a rough day, throwing two interceptions in the fourth quarter with one returned for a touchdown by Eddie Jackson.

Blount also wouldn’t put the blame on offensive coordinator Jim Bob Cooter who called a conservative game except for a touchdown drive in the third quarter that feature a 43-yard pass play to Kenny Golladay.

“Our play caller calls plays but we have to go out there and execute the plays. Whether we’re doing it right or wrong, people may not know, but he does and we do,’’ Blount said. “It’s just minor details we have to fixed. Whenever we have those minor details that don’t get fixed, you have bad plays and you have plays that stall your offensive drive. We have to get back in the lab and be more detailed at what we do, pay a lot more attention to our craft and try to get this thing back on pace.’’

The Lions dropped to 4-7, matching their loss total for all of the 2017 season. Next up are the Los Angeles Rams who own the best record (10-1) in the NFL.

“We’re competitors, we’re warriors, we’re not going to go out there and lay down for anybody,’’ Blount said. 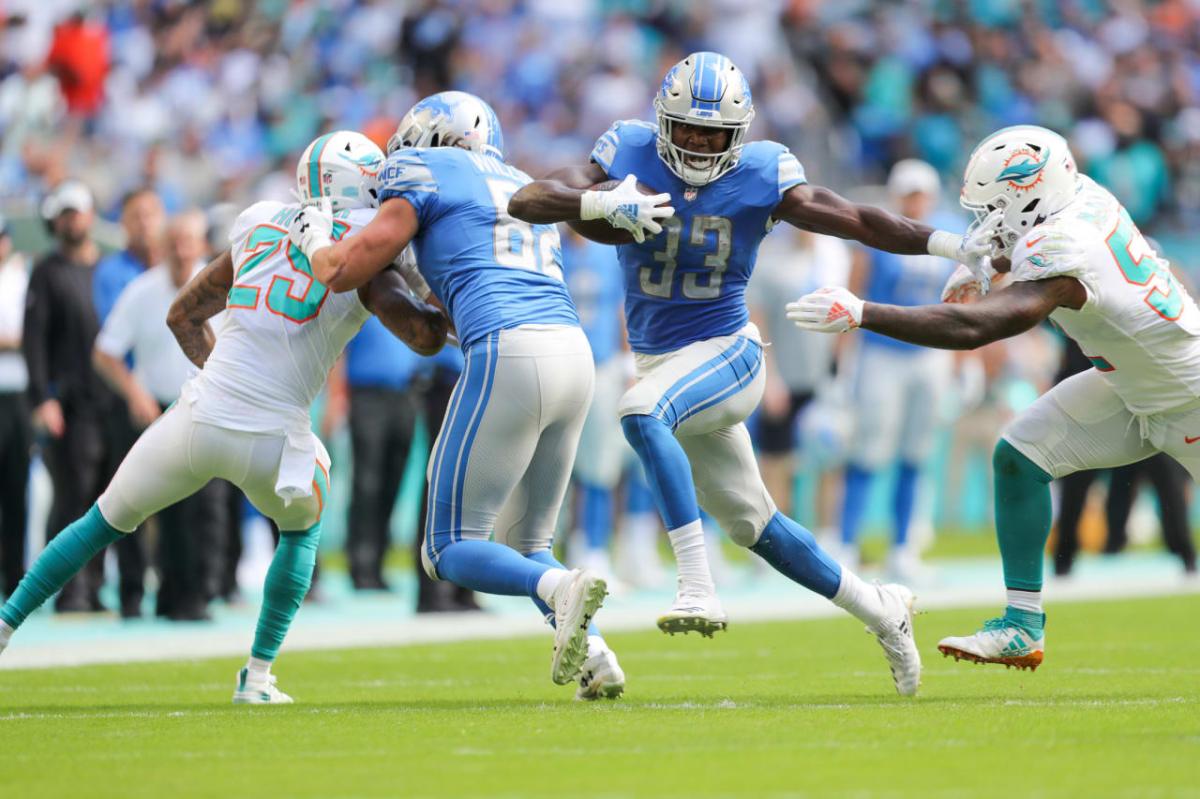 The Lions handed the Miami Dolphins their first home loss this season, winning 32-21 on Sunday in steamy Miami Gardens.

Amazing what a successful run game can do for an offense. Coordinator Jim Bob Cooter looked like a genius and quarterback Matthew Stafford had one of his more efficient games.

It was the first road win for the Lions who are now 3-3 and riding a two-game win streak.

Temps in the high 80s (and higher in the sun on the Lions’ bench) did not seem to be a factor. The Lions could not afford to wilt in the fourth quarter and they didn’t.

1. The run game. The run game. The run game. The Lions rushed for 248 yards, the most since Nov. 13, 1994 when they had 293 yards against Tampa. Barry Sanders had 237 rushing yards that day. On Sunday, rookie Kerryon Johnson finished with 158 yards, including a 71-yard scamper. He averaged 8.3 yards per carry. LeGarrette Blount had 10 carries for 50 yards and a touchdown. Long runs, short runs, they ran it all. The Lions have worked toward establishing a run game and there have been some strong hints it was coming, it arrived in Miami. Prior to the game the Dolphins defense was allowing 118.2 rushing yards per game.

2. Matthew Stafford completed 18 of 22 passes for 217 yards. Stafford was a mess in Week 1 with one touchdown and four interceptions. But since then, he has one interception and 11  touchdowns, including two touchdowns in Miami. He completed passes to eight teammates. He didn’t even connect with Kenny Golladay until the second half. One touchdown pass to Golladay was negated by a holding penalty by Frank Ragnow. Tight end Michael Roberts had three receptions for 48 yards – two of them were for touchdowns.

3. Detroit’s defense which has been improving against the run, had a solid effort again. They held Frank Gore to 29 rushing yards. The 14-year veteran had averaged 48 yards per game this season. Miami’s Kenyan Drake’s 54-yard touchdown scamper was the longest that the Lions allowed. This is a huge step forward for the defense which seems to be adjusting to Matt Patricia’s changes. It was kind of ugly at first. They allowed a combined 259 rushing yards in the first two games, both losses. Detroit outran Miami 248 to 107 yards.

4. Miami backup quarterback Brock Osweiler completed 71 percent of his passes and threw for a pair of touchdowns, but he was sacked four times and often under pressure. Ricky Jean Francois, who was playing in his hometown, had two of those sacks. It wasn’t an awful game for the backup, but Detroit’s defense held him in check after he had passed for 380 yards the previous game. So much for the talk of “Brock-tober.”

5. Matt Prater was perfect three of three on field goals, including a 50-yarder late in the fourth quarter. It was the kicker’s best game this season.

UP NEXT: The Lions play the Seattle Seahawks (3-3) at Ford Field at 1 p.m. on Sunday, Oct. 28. The Seahawks will be coming off their bye week.