Matthew Stafford played his best game early this season and he got big-time help from the Lions’ defense which intercepted Cardinals quarterback Kyler Murray three times.

The 26-23 win came courtesy of Matt Prater’s 39-yard field goal with the clock running out on Sunday in Arizona. It snapped the Lions’ 11-game losing streak.

“A chance to end the game on offense is what I want, that’s what we all practice for is to go out there and control the game at the end of it and win it,’’ Stafford said. “Obviously a good operation by our special teams at the end to get the win.”

However, it was definitely a team effort.  Mistakes? Sure. Penalties? A few killers. Missed opportunities? Oh yes.

Still the Lions overcame them and got the ball back with 1:52 left, the game tied at 23-23 and lousy field position at their own 9.

Stafford was four of five on that final drive. His 53-yard pass to Marvin Hall looked like a touchdown or at least a catch at the 1-yard line, but a holding call on Halapoulivaati Vaitai negated the play.

“We just had to move on to the next play. It is what it is, we’re all fighting tooth and nail,’’ Stafford said.

They could have folded or shrugged their shoulders, instead they marched down the field with some authority.

Five keys to the win:

1. Matthew Stafford had a good game, looked more like his old self. He completed 22 of 31 passes for 270 yards and a pair of touchdowns even though he was sacked four times. “I’ve been doing this a long time, I feel real comfortable in that situation, that’s the situation I want,’’ Stafford said. “I hate sitting on the bench and watching another phase trying to win the game for us. I love it. Had an opportunity in week 1 to get it done and got close, didn’t get it done. We had another opportunity today I wasn’t going to let that slip through my fingers.’’ It was his 29th fourth-quarter comeback, the most in the NFL since he joined the NFL in 2009. It was also his 35th game-winning drive, the second most in the NFL since 2009.

2. Kenny Golladay’s return, after missing the first two games with a hamstring, was huge. “Obviously a big weapon for us, made a great play in the red zone,’’ Stafford said. “Just an undersized safety (covering), I just tried to throw one up to a good spot for him, he went up and made a great play and got in which was awesome.’’ That touchdown gave the Lions a 17-13 lead with less than a minute left in the first half.

3. After zero takeaways in the first two games, this was a point of emphasis with the defense preparing for this week. Nice job. Arizona quarterback Kyler Murray had been intercepted just twice total in the first two games, but the Lions picked him off three times. Credit to rookie Jeff Okudah, Jamie Collins and Duron Harmon. Collins’ interception led to a Lions touchdown, while Okudah’s in the third quarter led to a Matt Prater field goal which gave Detroit a 20-16 lead. Win the turnover battle and often you win the game.

4. The defensive pressure up front which was lacking in the first two games is what helped with the interceptions. Murray was only sacked once (by Romeo Okwara) but he’s a mobile quarterback who is tough to get down. “You can see how dangerous he is when he gets in space. He’s got unbelievable quickness and acceleration,’’ Patricia said of Murray. Still much work to do on defense, but certainly the group looked better against the Cardinals who are now 2-1.

5. Running back Adrian Peterson got the workload in the running game. He finished with 22 carries for 75 yards and started with a 27-yard scamper on the Lions’ second play of the game from scrimmage. Not bad for a 35-year-old back. Kerryon Johnson had just three carries for 16 yards, but his work on pass protection was huge.

BY THE NUMBERS: Matt Prater kicked four field goals (37, 24, 35 and 39 yards). … Stafford completed passes to nine different guys. … Jason Fox averaged 55.5 yards on his four punts and had a long one of 65 yards. … The Lions were just 2 of 6 in the Red Zone while the Cardinals were 3 of 3. … Each team had seven penalties – Lions for 46 yards, Cardinals for 48. … Tracy Walker led the defense with 11 tackles. Collins and Okudah each had six.

NEXT SUNDAY: The Lions (1-2) play the New Orleans Saints at Ford Field at 1 p.m. e help from the Lions’ defense which picked off Cardinals quarterback Kyler

ALLEN PARK — After two weeks, the Lions remain undefeated even though that first-week tie still seems kind of ugly.

The Lions are 5-point underdogs on the road at Philadelphia at 1 p.m. on Sunday.

Quarterback Matthew Stafford said he doesn’t think at all about being 1-0-1.

“It’s just a huge challenge for us this week. Going to Philadelphia is a tough place to play. They have a bunch of good players and have been a really good team for a long time, so it’s just a new challenge for us, something we have to attack on its own,’’ Stafford said.

Stafford and his teammates agree that Sunday’s comeback win against the Chargers doesn’t mean much this week.

Five things to know about the Lions at the Eagles (1-1):

1. In the win over the Chargers, Stafford was let loose. Offensive coordinator Darrell Bevell called an aggressive game even after Stafford had thrown two interceptions. Afterward Stafford was smiling and it wasn’t just because of the win. Bevell is known for depending on the run game and certainly a balance (not necessarily 50-50) is key to an offense putting up points in the NFL, but Stafford has to be allowed to throw the bombs, to throw on an important third down. Maybe this is the change the Lions have needed over the past few years. Now we’ll see if it continues.

2. Stafford must be kept clean again. It’s rare when he goes through a game without being sacked like he did on Sunday. In the last five seasons he’s been sacked 213 times with only 7 games with no sacks. “Keeping the quarterback safe and protected is No. 1. You know obviously you’ve seen us do different things with Matthew (and the first thing is always trying to take care of him and how we keep him upright, even if he gets an opportunity to run,’’ Bevell said. “That’s always in the forefront of our minds because those guys are really hard to find, and we have a good one and we want to protect that guy.”

3. After missing left tackle Taylor Decker for one game and linebacker Jarrad Davis for two, it looks like the Lions will be mostly healthy in Philadelphia. Both practiced all week and are officially listed as questionable. Tyrell Crosby did a commendable job filling in for Decker on Sunday, but having a healthy Decker return would be a positive facing Fletcher Cox and the Eagles’ defensive line. “They have a solid front with Fletcher and Brandon Graham on the same side. They can move those guys around with (Derek) Barnett. It’s an active front,’’ Bevell said. “They do a great job of getting penetration and really trying to work up the field and wreak havoc that way. Fletcher has been a good player for a long time and something that we’ll have to make sure that we have answers for. It’s a good combination of him and Brandon Graham working on the side together.”

4. Matt Patricia did not confirm that Jarrad Davis will play on Sunday, but seemed optimistic before Friday’s practice. Davis’ presence would be huge against the EAgles offense led by Carson Wentz and fueled by TE Zach Ertz. “I think J.D., just in general, obviously this is a kid that loves the game,’’ Patricia said. “He just loves to come in and prepare every week and he loves to learn and he’s just every single day – that intensity to get better, as a coach, is something you love to see. I think he obviously provides a layer of leadership, I’ll say comfort or calmness, to the middle of the defense when he’s out there because of his knowledge and his ability to control the middle part of what we do in the defensive scheme. I think those other guys have done a great job and really Devon Kennard I think has stepped in great as far as the communication on the field. I think he’s done a phenomenal job of that too.’’

5. Special teams have not gotten off to a good start this season. Would expect that Matt Prater’s missed 40-yard field goal and missed extra point are just anomalies. Patricia said punt returner Jamal Agnew was benched for that game after a fumble, but that doesn’t mean he won’t be back as the return guy. Patricia does have options in Danny Amendola and Ty Johnson. Special teams also had too many penalties which is something that should be easy to clean up.

PREDICTION: Eagles 27, Lions 24. (Philadelphia is banged up while Detroit is mostly healthy. Still, it’s a tough place to play and pulling out a win would be a tough task.)

No timeline for staff changes 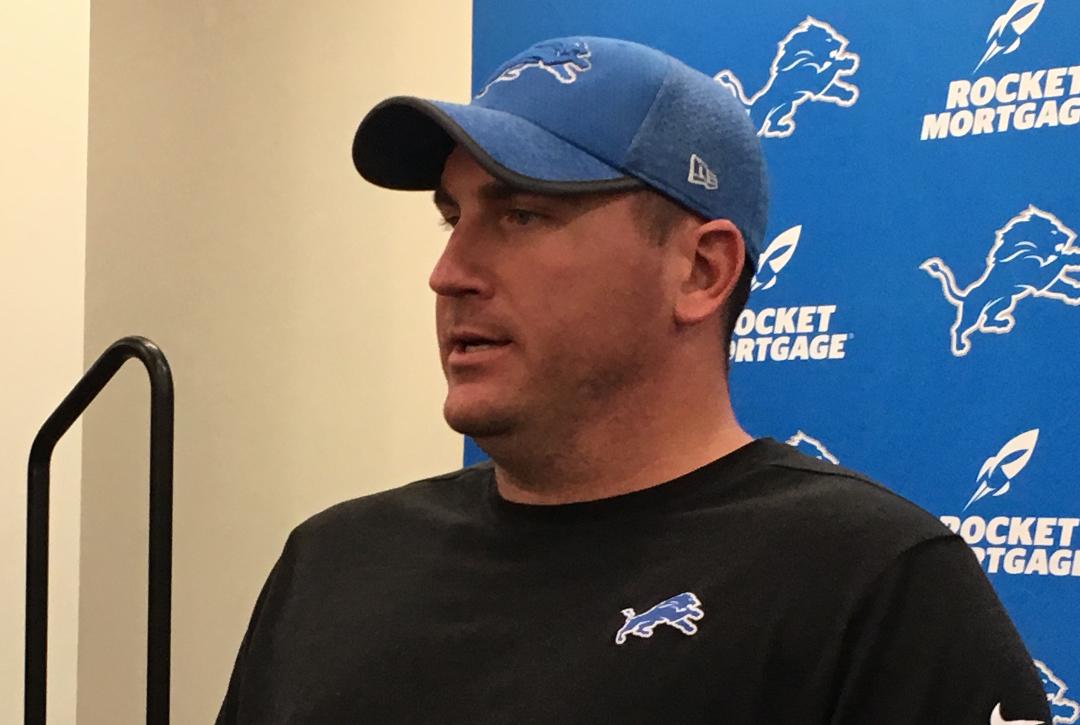 ALLEN PARK — Matt Patricia said on Monday that he has not made decisions on his staff moving forward. That includes offensive coordinator Jim Bob Cooter.

The Detroit Lions coach, who just completed his first season with a 6-10 record, said he wants to take time to let the emotions die down and then will evaluate which coaches and players will be a part of the equation moving forward.

He was asked specifically about Cooter, but Patricia responded in generalities.

Cooter, who was originally hired as the offensive coordinator by ex-coach Jim Caldwell, is in the final season of his contract. The Lions offense went from 13th in the NFL in 2017 to 24th in 2018 based on yards per game.

Patricia said he’s not sure when decisions on his staff will be made.

“I don’t think I need to put a hard timeline on it at this current moment. But obviously we do have a time limit we do have to address with it,’’ Patricia said. “Things will come up when they come up. For the minute I’m going to take the rest of the day, enjoy the New Year, see my kids and we’ll go from there.’’

The Lions wrapped up their season with a 31-0 win at Green Bay on Sunday. The players cleaned out their lockers on Monday.