In the past two years, Lions GM Bob Quinn has proven that he is not shy about dumping his own draft picks.

It happened again on Wednesday when Quinn waived defensive end Anthony Zettel who was a sixth-round pick in Quinn’s first draft class in 2016.

The Lions were awarded DE Romeo Okwara via waivers from the New York Giants. Okwara, 23, played in six games for the Giants in 2017 due to a knee injury and finished with no sacks. As a rookie he played in all 16 games with four starts and one sack. He was signed by the Giants as an undrafted free agent out of Notre Dame in 2016.

In 2016 with Kerry Hyder out, Zettel started all 16 games and was second in sacks (6.5) only to Ziggy Ansah (12).  As a rookie he played in 13 games with no starts.
Zettel, who is from West Branch, Mich., was listed as Hyder’s backup on the depth chart released this week.

In the final game of the 2017 season, the defensive line starters were Zettel, Ansah, A’Shawn Robinson and Akeem Spence who was traded to the Dolphins in May. Ricky Jean Francois and Sylvester Williams are expected to start at defensive tackle with Robinson as a backup. Hyder and Ansah will start at defensive end.

The Lions open the season on Monday night against the New York Jets.

Cassel’s experience a boost on and off the field 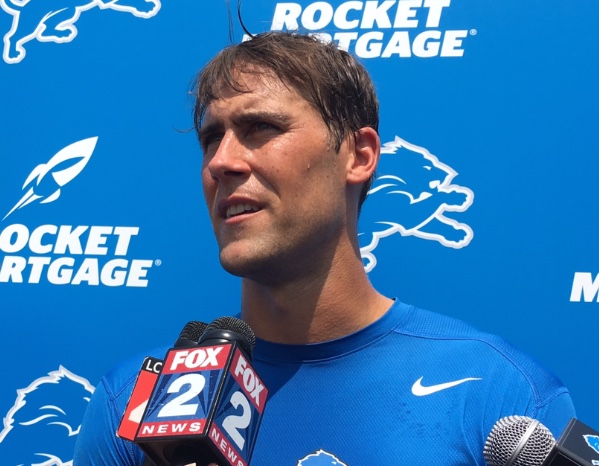 The Lions released quarterback Jake Rudock Saturday as one of their cuts on the way to the initial 53-man roster which was due at 4 p.m.

Matt Cassel, the NFL veteran, will back up Matthew Stafford this season.

Do not think for a minute that the backup has to be the quarterback who has best moved the offense in the preseason games or the younger guy. Look at the big picture.

“Their preparation, their professionalism, how they attack the day, the daily game plan, the weekly game plan, how they prepare themselves, is definitely all part of the evaluation,’’ coach Matt Patricia said.

This is not an attack on Rudock who could land on the practice squad if he clears waivers.

However, keeping Cassel over Rudock is a good move. Here are five reasons why:

1. After watching both at training camp, Cassel at age 36, has a better arm than the 25-year-old Rudock who served as Stafford’s backup the past two seasons after he was drafted in the sixth round out of Michigan in 2016. The Lions wouldn’t have signed Cassel if they thought his arm strength was gone and they wouldn’t have kept him if he didn’t meet expectations in the offseason and preseason.

2. It is not, however, all about arm strength or even the ability to move the offense down the field. Certainly those help, but the backup quarterback serves as another set of eyes for Stafford on the sideline during games, at practice and in the film room. This is a huge part of the job description. It only makes sense that this is the strength of Cassel who is entering his 14th NFL season. Deciphering defenses is second nature. Cassel has seen it all as a starter and backup on six other NFL teams. That experience is invaluable.

3. Rudock had a head-start on the Jim Bob Cooter offense, but Cassel seemed to be a quick learner. It happens with experience. Did I mention the benefits of experience? Cassel has played in 105 NFL games completing 1,571 of 2,666 passes (58.9 percent). As an NFL starter, Cassel owns a 36-45 record. He had two 10-5 seasons — in 2008 (Patriots) and 2010 (Chiefs). Rudock got some garbage time in three games last season completing 3 of 5 pass attempts with one interception.

4. Cassel, who was drafted in the seventh round in 2005 by the New England Patriots, has a history with Patricia. While Patricia ran the defense in New England, the two were not strangers. This is not the only reason Cassel got the nod as the No. 2 quarterback but it helps that Patricia knows him well and obviously trusts him.

5. Rudock is a nice guy and has worked hard the past two seasons. This isn’t a nice guy contest, although Cassel seems like quite a champ in that department too. It’s a business. Remember how Jim Caldwell felt comfortable with Dan Orlovsky as a backup? That’s how it looks for Patricia and Cassel.

(BONUS tidbit: Cassel has NFL career earnings of $61 million, according to FOXsports.)

Expect changes through the next few days. Initial roster cuts: