The Lions had to win on Sunday to keep whatever weak chances they had of making the playoffs. Lousy play on both sides of the ball resulted in a 20-13 loss at the Chicago Bears.

Yes, the Lions were missing quarterback Matthew Stafford who was not cleared to play by doctors due to broken bones in his back. He had started 136 straight games. Jeff Driskel got the start.

The Lions dropped to 3-5-1 while the Bears (4-5) snapped their four-game losing streak.

The Bears’ offense looked nearly Super Bowl worthy starting with their last possession in the second quarter and continuing through the third quarter – just long enough to do too much damage on the scoreboard. Quarterback Mitchell Trubisky, who had been struggling this season, threw touchdown passes on three consecutive possessions.

The Bears quarterback was nothing special in the first quarter, then he was transformed into more of what he looked like last season. It likely had something to do with going against the Lions’ defense, one of the worst in the NFL ((31st in yards allowed per game). Late in the third and into the fourth, the Bears were forced to punt four straight times. So give the Lions’ defense credit there.

After two Matt Prater field goals in the first half, Driskel connected with Kenny Golladay on a 47-yard touchdown play with 5:53 left in the fourth to cut the Bears’ lead to 20-13. Time was not on the Lions’ side. The Lions defense forced a punt on the Bears’ last possession and Detroit got the ball back with 1:48 left at their own 10-yard line but there just was not enough time to get to the end zone.

The Lions’ defense is missing key players (Tracy Walker, Da’Shawn Hand, Romeo Okwara). Sorry, no excuses. The Bears ranked 29th in the NFL in total offense (266.8 yards per game) before Sunday’s game. It was a game where the Lions’ defense should have stepped up and made a statement no matter who was playing

The Lions played the second half without running back Ty Johnson and right tackle Rick Wagner who were both tested for concussions.

After Driskel completed his first five passes in the first quarter, he struggled which was expected. He started five games for the Cincinnati Bengals last year (going 1-4) but other than that the 26-year-old quarterback just doesn’t have the knowledge, the experience and feel for the game. He finished 27 of 46 for 269 yards, one touchdown and one interception. He was also Detroit’s leading rusher with five carries for 37 yards. That also speaks volumes about the offense.

Several reports say that Stafford is week to week. He was on the sidelines, giving advice to Driskel.

Up next: Dallas Cowboys at Ford Field at 1 p.m. on Sunday, Nov. 17. (Dallas hosts the Vikings on Sunday night.)

ALLEN PARK — If the Lions are going to turn around the season, a win at Chicago might be a good place to start.

Without question, the offense is the Lions’ strength with Matthew Stafford having one of his best seasons. The Bears’ defense has faltered without injured defensive tackle Akiem Hicks the last four games. Still it’s much better than the offense led by Mitchell Trubisky who has thrown five touchdowns and three interceptions and was still called a “great player” by Matt Patricia.

Five things to know about the matchup:

1. The Lions’ struggles can be placed squarely on the shoulders of the defense. Whether it’s scheme or mixed tackles or lack of pressure by the line, it’s not working. Defensive coordinator Paul Pasqualoni said it’s not fair to say it’s been inconsistent all year due to the talent they have faced. “Every week, everybody tries to get better every day. Everybody here tries to get better. So, every week’s a new week. We’re moving on to this one-week season,’’ Pasqualoni said. “I’ve always considered – whether it was in college or pro ball – every week was a one-week season. To be honest with you, I don’t look much past beyond that. I think it’s the best way to handle the game. We’re into this – we’re in our division, Chicago Bears, great tradition, excellent team. So, we’re getting ready to play them.

2. After Miles Killebrew suffered a concussion in practice Thursday, the LIons are down to three healthy safeties — Tavon Wilson, Will Harris and C.J. Moore. So the secondary, which has been struggling, will be further depleted. Patricia said they cross-train guys at different positions in case of a situation such as this. It’s possible cornerback Mike Ford could pitch in at safety.

3. Detroit’s defense has been really inconsistent at stopping the run, allowing 138.5 rushing yards per game. Again, the defense has to step up. Bears running back David Montgomery has scored all of their rushing touchdowns (5) but is only averaging 3.6 yards per carry. “They were running the ball a week ago, two weeks ago against the Chargers. I think they ran it 38 times for – I don’t know – 138 yards. They really did an impressive job there. (Tarik) Cohen is an excellent, excellent back in the backfield. They have excellent wide receivers. (Trey) Burton is an outstanding athlete at the tight end position. They’re explosive, they can make big plays. We’re going to focus on what we feel we need to do to stop them and have a consistent day defensively,’’ Pasqualoni said.

4. Put the offense in the best position to succeed. Chicago’s offense may be nothing to write home about, but the defense is among the 10 best in the NFL. The fourth-down play call from the end of the game last week is still a head-scratcher. “I want to call plays that score touchdowns, so it didn’t score a touchdown. But we were on the one-yard line, so we ended up going with goal line package which we practice all the time,’’ Bevell said. For the most part Bevell and Stafford seem to be on the same page in their first season working together.

5. Protect the Franchise, Mathew Stafford. He was on the injury report this week after a big hit last Sunday. It should be slightly easier to protect him with Hicks sidelined but the Bears’ defense is not a one-man band. “To be honest with you, this Bears defense is loaded. Their whole front, their linebackers, their backend – about as impressive as a group as you’ll find. It’s a huge challenge to block Khalil Mack and Leonard Floyd. Their second-most sack leader is (Nick) Williams on the inside and Eddie Goldman is playing outstanding’’ Lions offensive coordinator Darrell Bevell said. “They have people that have been able to pick up the slack. I think just from the front all the way working through to the back, they have linebackers that can run, they have corners that can cover. It’s a really, really great defense.” 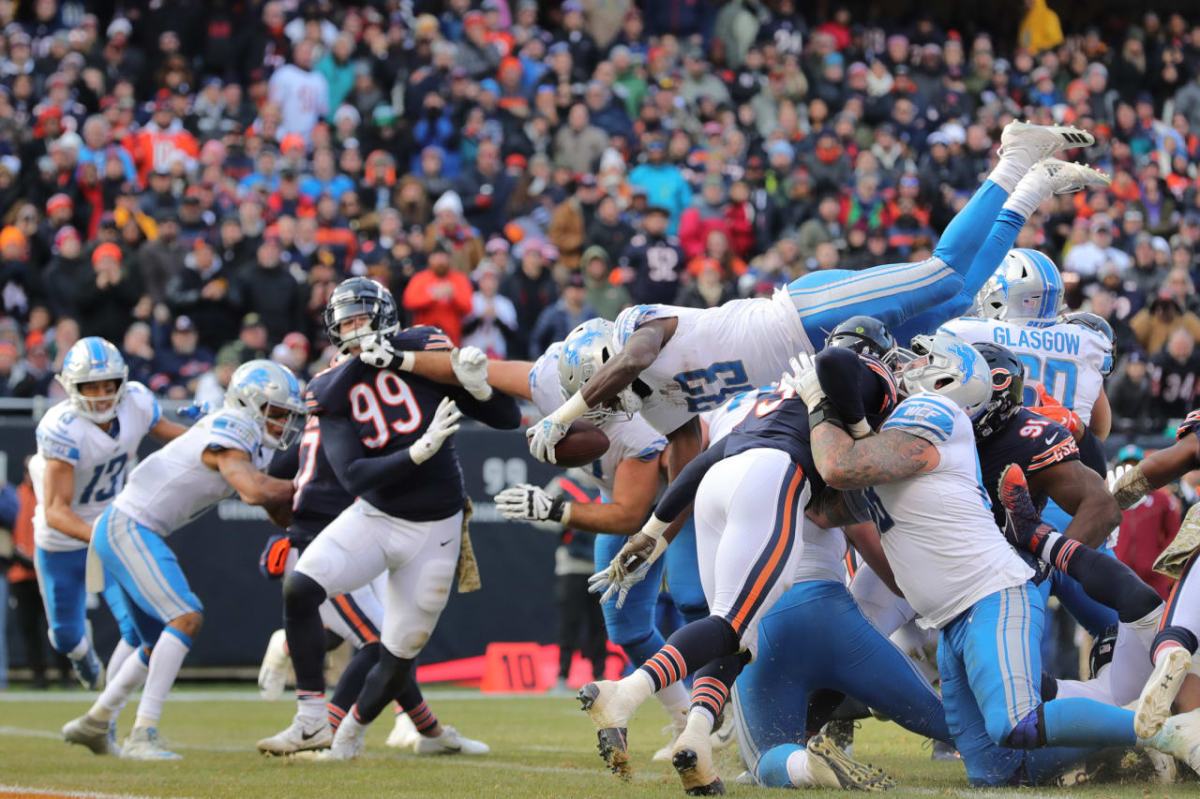 ALLEN PARK — When it comes to Thanksgiving, Detroit Lions quarterback Matthew Stafford says he’s no different from most people.

“I just eat a ton of food like everybody else. Eat a bunch of food, relax a little bit. It’s kind of a nice little couple days off for us,’’ Stafford said.

Unlike others, before he hits the dinner table he has a football game to try to win. Stafford and the LIons have won four of the last five games on Thanksgiving, losing, 30-23, to the Vikings a year ago.

Usually players on both teams love the Turkey Day spotlight.

“It’s awesome. I grew up watching it as a Cowboys fan. I’ve been a part of it now for 10 years here. It’s cool that the city and the fans and really our team, we embrace this game, we love it, we love playing it every year,’’ Stafford said. “So, it’s just a great tradition to be a part of and obviously a lot of fun when you win it.”

It will be a first for Bears coach Matt Nagy who looks forward to the chance to play with the nation watching on Thanksgiving.

“I know I am, and this will be my first time playing a game on Thanksgiving. What better way to come out and play a game on Thanksgiving? Not all players and people get these opportunities, these chances. So, the guys will be looking forward to it and it’ll be fun,’’ Bears coach Matt Nagy said on a Tuesday conference call.

The Lions will be without wide receiver Marvin Jones Jr., and running back Kerryon Johnson. While Bears quarterback Mitchell Trubisky is listed as “doubtful” which means it’s likely Chase Daniel will get the start.

1. The Lions must stop the run like they did when they lost to the Bears on Nov. 11. That day Detroit’s defense held Chicago to 54 rushing yards. Whatever that game plan was, Detroit needs to repeat in. After a horrid start on run defense, they’ve held opponents to less than 60 rushing yards for two straight weeks.

2. Don’t give up on the run game even without Kerryon Johnson (knee). Between LeGarrette Blount, Theo Riddick and Zach Zenner stick with the one who finds the most success as the game progresses. Don’t be surprised if it’s Zenner. The Lions only rushed for 66 yards against the Bears the last game, but part of the reason is that they were down 26-0 early. “We have a bunch of guys in that room that are talented. If they need to play more, they’ll play more. If they don’t, then we’ll roll with what we have,’’ Stafford said.

3. The Lions will be without Marvin Jones Jr., for the second straight game. Stafford was able to make the passing game work in the win over the Panthers by targeting Kenny Golladay 14 times. He finished with eight catches for 113 yards and a beauty of a touchdown. Stafford is still getting acquainted with newcomer Bruce Ellington who had six catches for 52 yards on Sunday. “I thought Bruce (did a really nice job stepping in. I don’t know how long he’s been here, maybe 10 days. So, it was really good for him to get out there and get his feet wet,’’ Stafford said.

4.  When the Lions and Bears last met, cornerback Darius Slay was on the sidelines. He’s back and that should be a huge boost. “He’s a great player. He’s been doing it for a while. I think there are a lot of different things that he does well,’’ Nagy said. “He definitely makes them better, and we know that and we have to know where he’s at at all times.”

5. Get pressure on the quarterback — likely Chase Daniel who hasn’t started a game since 2014. Trubisky was sacked just once by the Lions defense on Nov. 11. Because of Daniel’s lack of playing time, it should be easier to rattle him. The defense did a solid job against the Panthers’ Cam Newton sacking him three times, although he did pass for three touchdowns. Daniel is no Cam Newton but the defense can’t think that way.