Five things to know about Stafford’s records against Packers 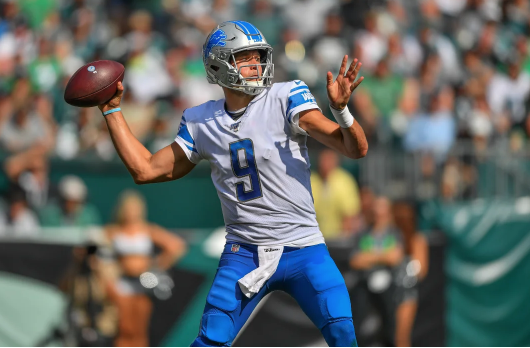 ALLEN PARK — Matthew Stafford has played well against the Packers in recent years, with the Lions winning four straight against them and three of their last four at Lambeau Field.

The Detroit Lions quarterback will get his next shot on Monday night when the Lions play the Packers at Green Bay in their first NFC North matchup of the season.

“The toughest part about playing Lambeau — I say it all the time — is playing the Packers. It’s not the environment, it’s not all that, you’ve got to play the Packers they’re a good football team,’’ Stafford said on Wednesday. “They’ve got a really good defense this year, got an offense that’s explosive, they’ve got a great quarterback. They do a good job of playing great at home, it’s on us to play a little better.’’

The Packers (4-1) are tops in the NFC North with the Lions (2-1-1) in second place. It’s the first division game this season for Detroit.

“All the games count and no doubt a division game against a really good football team, it’s going to be a fun atmosphere. Monday night will be a whole bunch of fun. We’re going to have some young guys that I’m sure first time playing on Monday will remember it for a long time playing at Lambeau, excited to get out playing again,’’ Stafford said.

He can climb up the record charts with a good game.

1. Stafford has seven wins against the Packers, tied for the 12th-most in NFL history. A win would bump him into a tie for eighth-most. A win would also mark his fourth win at Lambeau Field which would put him in a tied for seventh all-time. He’s 7-10 all-time against Green Bay.

3. With one touchdown pass, he’ll become the quarterback with the most TD passes against the Packers in NFL history. His current total of 34 is tied with Johnny Unitas.

4. Stafford needs only 58 passing yards against Packers to move into first place all-time in that category. He is already among elite company. Three of the top five in passing yards against Green Bay are Hall of Famers: No. 1 Fran Tarkenton, No. 3 Unitas, No. 5 Bobby Layne. Also, Vinny Testaverde is at No. 4.

5. Stafford needs 352 passing yards to reach 40,000 for his career. Also he needs just four touchdown passes to reach 250 for his career. It comes as no surprise that Calvin Johnson was on the receiving end of the most (56) with Golden Tate (22) in second and Marvin Jones Jr. (19) in third. (Titus Young, a blast from the past, ranks in the top eight of receivers with most touchdown passes from Stafford with nine.)