This will be 80th Lions’ Turkey Day game 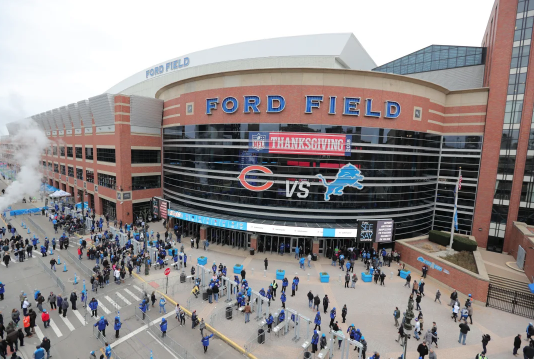 ALLEN PARK — Thanksgiving has been special for the Lions for 80 years.

When they meet the Chicago Bears at Ford Field, it will be the 17th meeting between the rivals on Thanksgiving. It started in 1934, the Lions’ first game on Thanksgiving.

In some years, the game plays a pivotal role in the season. This week? Not so much. The Lions (3-7-1) are still licking their wounds after a 19-16 loss at the Redskins on Sunday. The Bears (5-6) haven’t exactly lit up the NFC North either. A year ago, the Bears beat the Lions 23-16 on Thanksgiving.

This list of 10 of the most memorable Thanksgiving games was assembled a few years ago. It still stands:

1. Nov. 22, 1962, Lions 26, Packers 14 —  Roger Brown, the Lions defensive tackle, remembers this game like it was yesterday. The Packers were 10-0 and had beaten the Lions seven weeks earlier. The Lions wanted revenge and got it big-time. Brown sacked Hall of Fame quarterback Bart Starr seven times. Sacks weren’t an official NFL stat, but they were recorded. Starr was 11 of 19 for 49 yards and minus-6 yards rushing on four carries.

2. Nov. 26, 1970, Lions 28, Raiders 14 —  The Lions fell behind 14-0, then the late Charlie Sanders went to work. The tight end’s first touchdown — a pass from Greg Landry — was the most memorable.  “If you actually look at it you can actually see my fingernails gripping the ball. It didn’t hit in the palm of my hand, it was being gripped by my fingernails. If you look at that, if you are teaching technique, that would not be the technique,’’ Sanders said in the book “Game of My Life Detroit Lions.” The Lions won the next five games and got into the playoffs. They lost 5-0 to Dallas, the eventual Super Bowl winner, in the first round.

3. Nov. 25, 1976. Lions 27, Bills 14 — This was the O.J. Simpson show. The Buffalo running back ran for 273 yards and two touchdowns but the rest of the Bills offense only contributed 49 yards at the Silverdome. Lions quarterback Greg Landry threw touchdown passes of 21 yards and 24 yards to David Hill. Simpson’s touchdowns came late in the game after the Lions had grabbed a 20-0 lead.

4. Nov. 23, 1978 Lions 17, Broncos 14 —  The Broncos were heavily favored but Detroit’s defensive line was ready with a new coach, Floyd Peters, who stressed aggressive play. Defensive tackle Doug English remembers he had four sacks of quarterback Craig Morton. Stats were not an official NFL stat at the time, but there was no question that the D-line made sure it would not be Morton’s best Thanksgiving. The Lions scored on two rushing touchdowns (Rick Kane and Horace King) and a Benny Ricardo field goal. It was quarterback Gary Danielson’s best day but he did enough to get the win.

5. Nov, 28, 1991, Lions 16, Bears 6 —  This might have been one of the more emotional games. It was played 11 days after a freak on-field incident paralyzed guard Mike Utley who was in the hospital watching the game. Before the game Utley’s teammate Lomas Brown read a message on national television: “You’re still as big a part of this team as you ever were. Keep the faith.’’ The Lions defense intercepted Bears quarterback Jim Harbaugh four times and recovered two Bears’ fumbles.

6. Nov. 23, 1995, Lions 44, Vikings 38 — The last time the Lions played the Vikings on Thanksgiving, quarterback Scott Mitchell had a career afternoon completing 30 of 45 passes for 410 yards, four touchdowns and one interception. Brett Perriman caught two and Herman Moore and Johnnie Morton each had one. Barry Sanders’ 138 rushing yards included a 50-yard scamper for a touchdown that was possible thank to downfield blocks from Morton and Moore. Minnesota’s Warren Moon had a big day too with 384 passing yards, three touchdowns and a pair of interceptions. The Lions were 5-6 entering the game and won the remaining games in their schedule to finish 10-6 earning a wild-card playoff berth.

7. Nov. 26, 1998, Lions 19, Steelers 16 OT — How many games are known for the overtime coin toss? That’s certainly what set this one apart. When the captains at the center of the field, referee Phil Luckett asked the visiting Steelers to make the coin toss in the air to determine who would have possession. Jerome Bettis said “tails” — it was clear —, but Luckett heard “heads”, and when the coin came up tails, he awarded the ball to the Lions. The Steelers and Bettis argued but Luckett would not change. The Lions got possession, Charlie Batch and Barry Sanders got them down the field. Jason Hanson kicked the game-winner. It was not the Steelers’ best Thanksgiving.

8. Nov. 24, 2011, Packers 27, Lions 15 — The outcome for this one isn’t remembered as much as Ndamukong Suh’s misdeed. In the third quarter he pushed Green Bay’s Evan Dietrich-Smith’s head into the turf and then stomped on his upper right arm. Afterward Suh claimed he was trying to get his balance and it wasn’t intentional. The NFL thought otherwise and he was suspended for two games.

9. Nov. 22, 2012, Texans 34, Lions 31 OT —  Lions coach Jim Schwartz let his emotions get the best of him and possibly cost his team the game. In the third quarter, Houston’s running back Justin Forsett (who is now with the Lions)  went straight up the gut, looked like he got tackled with his left knee and left elbow on the turf. But he got up and kept going 81 yards into the end zone. The Lions didn’t chase him because they thought he was down and they were right. Even though all scoring plays are reviewed, Schwartz was so hot that he threw the red review flag which at the time prevented a replay due to NFL rules. The Lion were up by 10 before that Forsett touchdown. It took the wind out of their sails. Matthew Stafford was 31 of 61 for 441 yards, two touchdowns

10. Nov. 26, 2015, Lions 45, Eagles 14 — Matthew Stafford threw for five touchdowns with three of them landing in the mitts of Calvin Johnson. It was the third straight win for Detroit after Jim Bob Cooter had taken over as offensive coordinator, bringing their record to 4-7. Ziggy Ansah was on fire with 3.5 sacks (a career high) and a recovered fumble on the Eagles’ 14-yard line. Coach Jim Caldwell called it their most complete win.

Honorable mentions: In 2000, Patriots backup quarterback Tom Brady saw his first NFL action. He was one of three for six yards when the Lions won 34-9. … In 1997’s 55-20 rout of the Bears, Barry Sanders had 19 carries for 167 yards and three touchdowns. … In 2004, Colts quarterback Peyton Manning threw six touchdown passes in a 41-9 beatdown of the Lions. It was the start of a nine-game losing streak on Thanksgiving. … In 2006, Dolphins quarterback Joey Harrington threw for three touchdowns in a 27-10 win. When he was with the Lions, Harrington was 1-3 with zero touchdowns on Thanksgiving.