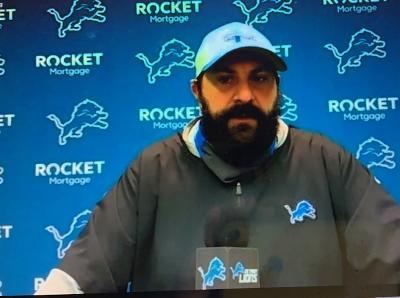 Every NFL team has to deal with the limitations due to the coronavirus pandemic. This week it was the Lions that took a hit with Matthew Stafford and Jarrad Davis being exposed and forced into quarantine.

Still the Lions (3-4) had to keep an eye on the goal for this week — beating the Vikings (2-5) at Minnesota on Sunday.

“I think for us it’s really important that we’re trying to do everything we can protocol-wise to stay in front of it and stay safe,’’ coach Matt Patricia said. “We knew that probably getting towards the month of November and December as flu season kicked up – we certainly understood that situations might change, and things might change from that aspect of it.’’

Luckily many of the team and individual group meetings are virtual. So Stafford and Davis have been able to keep up that way.

“Obviously trying to stay ahead as far as what’s going on out in the communities and knowing that will definitely affect us as we go. Doing the best we can to stay in front of it from that standpoint and trying to always go more extreme than we need to, just to make sure that we’re staying safe, but understand that everything can change, you know, day-by-day,’’ Patricia said.

Five things to look for against the Vikings:

1. Stafford has not been able to practice but that shouldn’t be a huge factor. “I think if you called Matt Stafford on an April day and said, ‘Hey, we’re going to go play a 60-minute football game,’ he’d be able to go out there and rip it. He’d be fine. He’d see defenses; he’d see coverage. He’d be doing all the right things. He’s a great vet. He knows how to play the game,’’ Patricia said. “… I trust Matt Stafford to always do the right things, be ready to go and that’s where we are right now. I think just in general – I think that the game of 11 guys working together at the same time, that’s why some of that stuff is important. It’s not necessary, but it’s definitely important.”

2. Defensive end Everson Griffen will be playing his first game for the Lions and it’s against his former team. After the trade from Dallas, Griffen could not join the team immediately due to coronavirus stipulations. His first practice was Wednesday. “I thought his communication was really good on the field, and he’s got a high motor. He practices at a high level, so that was really good. It was good for us to be out there in pads and to be able to see some of that and just get him used to some of the communication out on the field. I thought it was a good first step,’’ Patricia said.

3. After losing five of their first six games, the Vikings upset the Green Bay Packers last week. Minnesota’s ground game averages 144 yards per game while the Lions defense has had some trouble stopping the run. Last week the Colts ran for 119 yards. Running back Dalvin Cook is the workhorse with 10 rushing touchdowns. Three of those were against the Packers last week.

4. The Vikings defense is young but strong through the middle. “Certainly, to me, it starts with (Eric) Kendricks in the middle (with) his ability to communicate, especially with the front. I think the front’s improving every single week. Those guys are long, they get off the ball, they knock the line of scrimmage back,’’ Patricia said.  So, I think he’s done an outstanding job in the middle (of) kind of settling all that down, and certainly (Eric) Wilson, he’s played a lot of football for them and he’s a good player. I feel that the strength at the linebackers, plus the strength of the safety position – Harrison Smith, obviously, and Anthony Harris – those guys are phenomenal. A lot of what they do out of their pressure packages is because of the disguise that those two can come up with. They’re very in sync with all that, and you see them communicating out to the corners. I feel that their defense is getting better each week. I think that those guys are out there and they’re getting more familiar with each other and the communication looks like it’s getting better. Those guys are playing at a high level. The strength through the middle of the defense, I think, is important. They have that.”

5. No excuses for the Lions who are coming off the 41-21 loss to the Colts at home.  They will be missing three key players — Kenny Golladay, Jamal Agnew and Tracy Walker are out with injuries. Also, Joe Dahl, Christian Jones, Darryl Roberts and Halapoulivaati Vaitai are questionable.