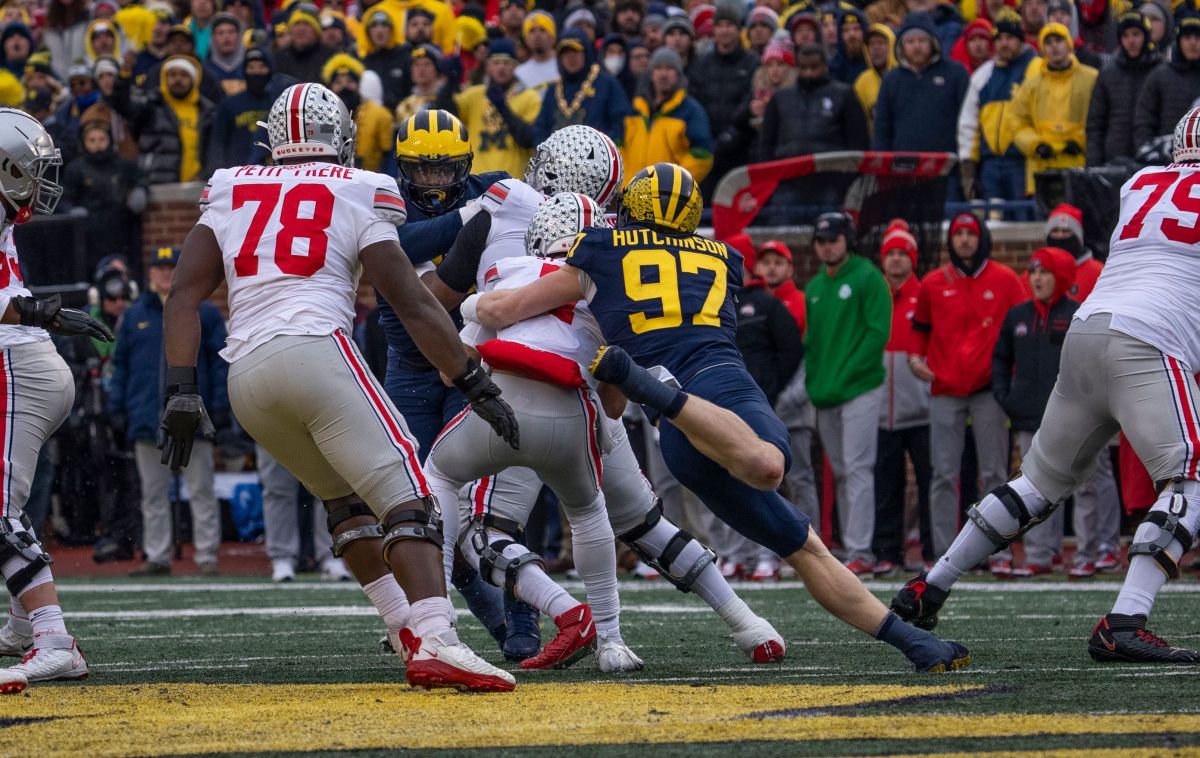 Aidan Hutchinson said he wanted to be drafted by the Lions all along.

The defensive end got his wish on Thursday night when he was drafted by the Lions with the second overall pick in the NFL draft. The Lions also traded up to draft WR Jameson Williams with the 12th overall pick.

Hutchinson at 6-foot-7 and 260 pounds, who played at Michigan, fills a big need for the Lions.

“It feels great to be home, once again … It was Lions all the way, the whole draft process, I wanted them to pick me,’’ Hutchinson said during a virtual call with the Lions media.

Over and over again he said he is grateful the Lions picked him.

The Jacksonville Jaguars drafted Travon Walker (Georgia) with the first overall pick. Hutchinson said his agent told him on Wednesday that it was about 90% he would not go to Jacksonville.

“I picked Michigan when I was in high school (Dearborn Divine Child), and to have the opportunity to play at home in front of a lot of the same fans. I’m so grateful, I can’t tell you how excited I am,’’ Hutchinson said.

It’s not a huge surprise that the Lions nabbed the local kid who finished his senior season at Michigan leading the Wolverines to the 2021 College Football playoff.

“He’s a Detroit Lion through and through,’’ said Aaron Glenn, Lions defensive coordinator.

After watching his Michigan freshman tape, Glenn said he saw more versatility from Hutchinson than he got credit for.

“All the coaches, we were firing on all cylinders when I had my visit. I’m really excited to get working with this coaching staff,’’ Hutchinson said.

“He is one of the guys you want to play for. You saw it by the way he composes himself and he does his business. He’s one of those guys you want to buy into because you can tell how passionate he is about the game,’’ Hutchinson said. “I didn’t even have to meet him, just seeing him in interviews, just seeing how he interacted with reporters and how he felt about his team. It felt so genuine that’s what I appreciate the most.’’

Glenn said Hutchinson answered all the questions and also mentioned his character as a plus.

Last season he was ranked third in the FBS with 14 sacks among his 62 total tackles, including 16.5 for loss, while breaking up three passes and forcing two fumbles in 14 starts.

Hutchinson is a legendary weight room grinder who is strong, flexible and explosive and possesses traits and toughness to play end in odd or even fronts, according to his NFL.com player profile.

His dad, Chris, was an All-American defender (1989-92) at Michigan and is now an emergency room doctor at Royal Oak Beaumont. When Aidan’s name was announced, the TV cameras caught a big hug between father and son.

Hutchinson is the 12th player the Lions have drafted from Michigan. The most recent Wolverine picks were Graham Glasgow and Jake Rudock in the 2016 draft. Neither one is still with the Lions.

“We’re going to be talking about Walker vs. Hutchinson for years to come,” Mel Kiper explained. “On my board, Hutchinson is the best prospect in this class. He dominated games in college, and he’s going to be a star for the Lions.’’ Kiper had Hutchinson going to Detroit in his final mock draft.